A Walk in the Country 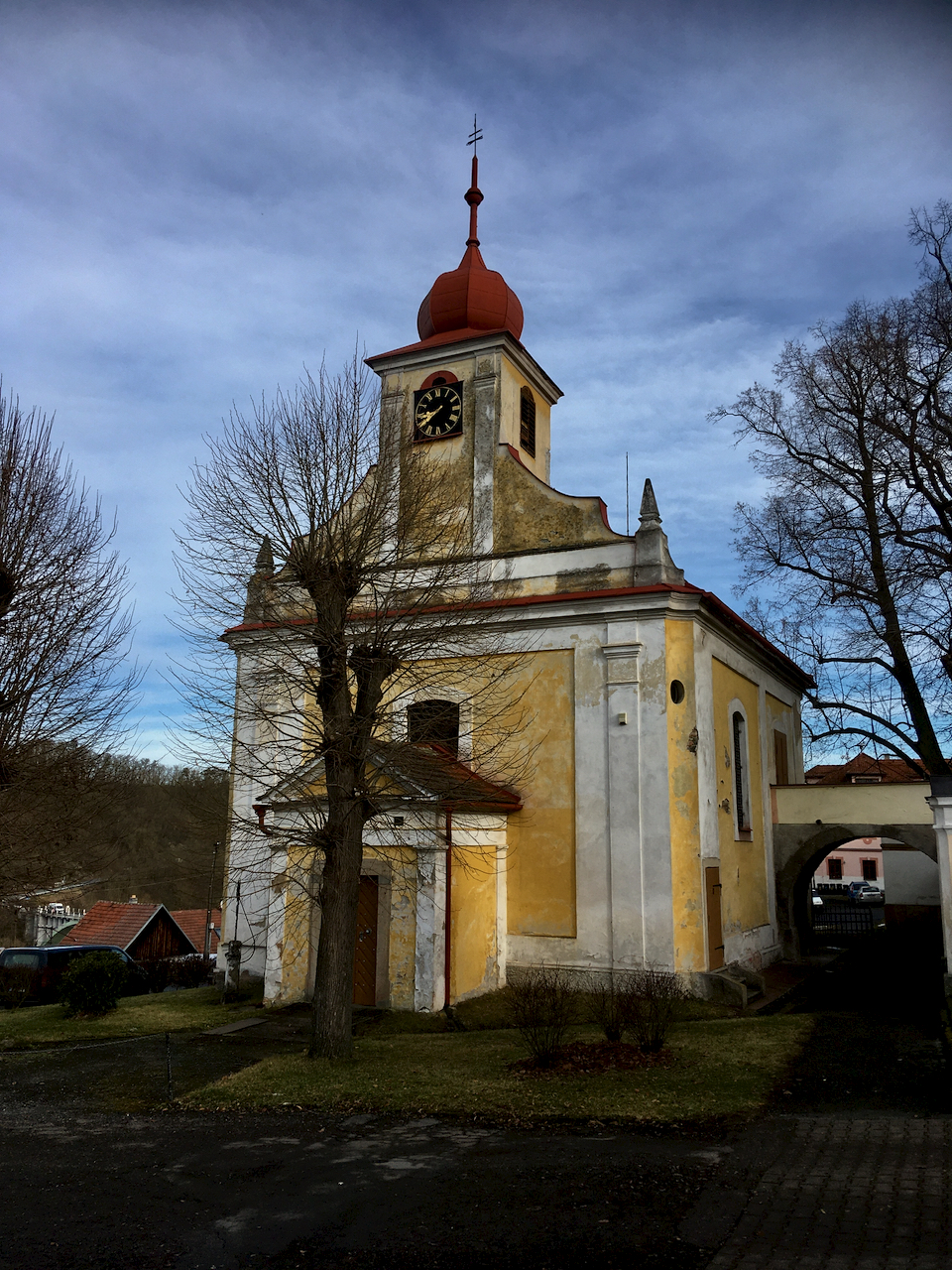 Liblín is a small market town, where my journey ended in Dec last year. It was, therefore, the obvious place to pick up the trail. I was joined today by Marie, Vincent and Otik for a short (6Km) walk, from Liblín to the remains of a 13th century castle, and back. It was a perfect day, clear, sunny and warm. The last 3 days, with temperatures above freezing, left little sign of the snow that stood in our way 2 weeks ago. For the better part of the day, we walked alone on an easy trail overlooking the Berounka River. We traversed a South facing slope, that was mostly dry and well maintained. It could not have been a better day or place for a walk in the country. 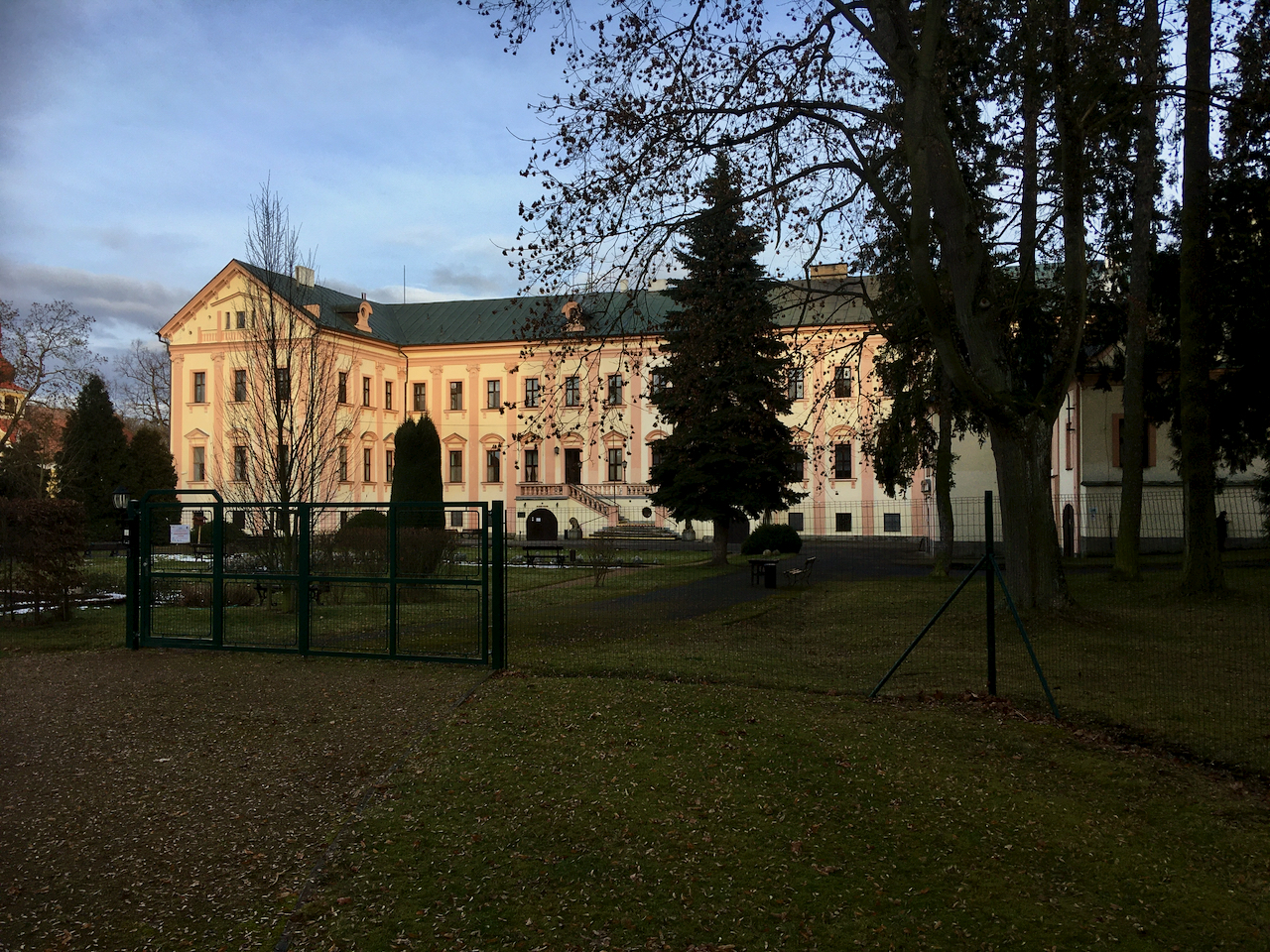 The town of Liblín is not large, perhaps no more than 90 houses, with about 300 inhabitants. It’s evident, from the several villas and a hotel, that it was once larger and more prosperous. Liblín has one of the few bridges that cross the Berounka River, built some time during the 1920s, a church, a chateau (now used as a retirement house) and a wooded park. The remains of a large farm, a courtyard surrounded by several buildings, once owned by the Lord of the Manor, is now a busy workshop, manufacturing batteries. 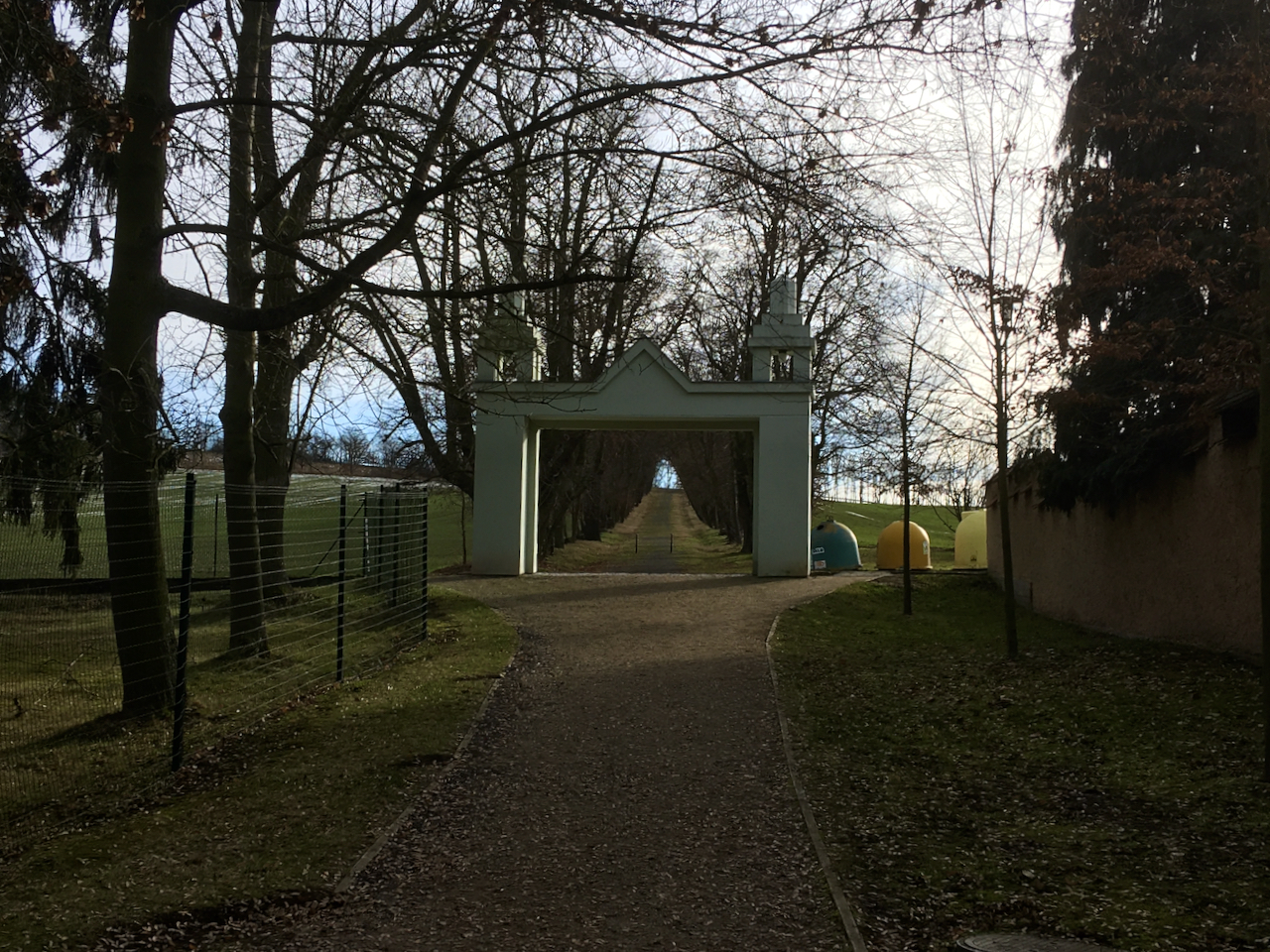 With everything closed, due to COVID, it appeared quieter than it might normally. When Marie and I arrived here in Dec., it was already at dusk, and difficult to see just how lovely this small town is. Still, the fact that shops are closed, and the few people we could see are behind a fence, adds a certain feeling of wonder. On such a nice day, where are the children, the new mothers pushing prams in the park, the elderly women sitting on benches in the square, the men playing cards in the pub? And so, the day began, as if we had just tuned into a new season of the Twilight Zone. 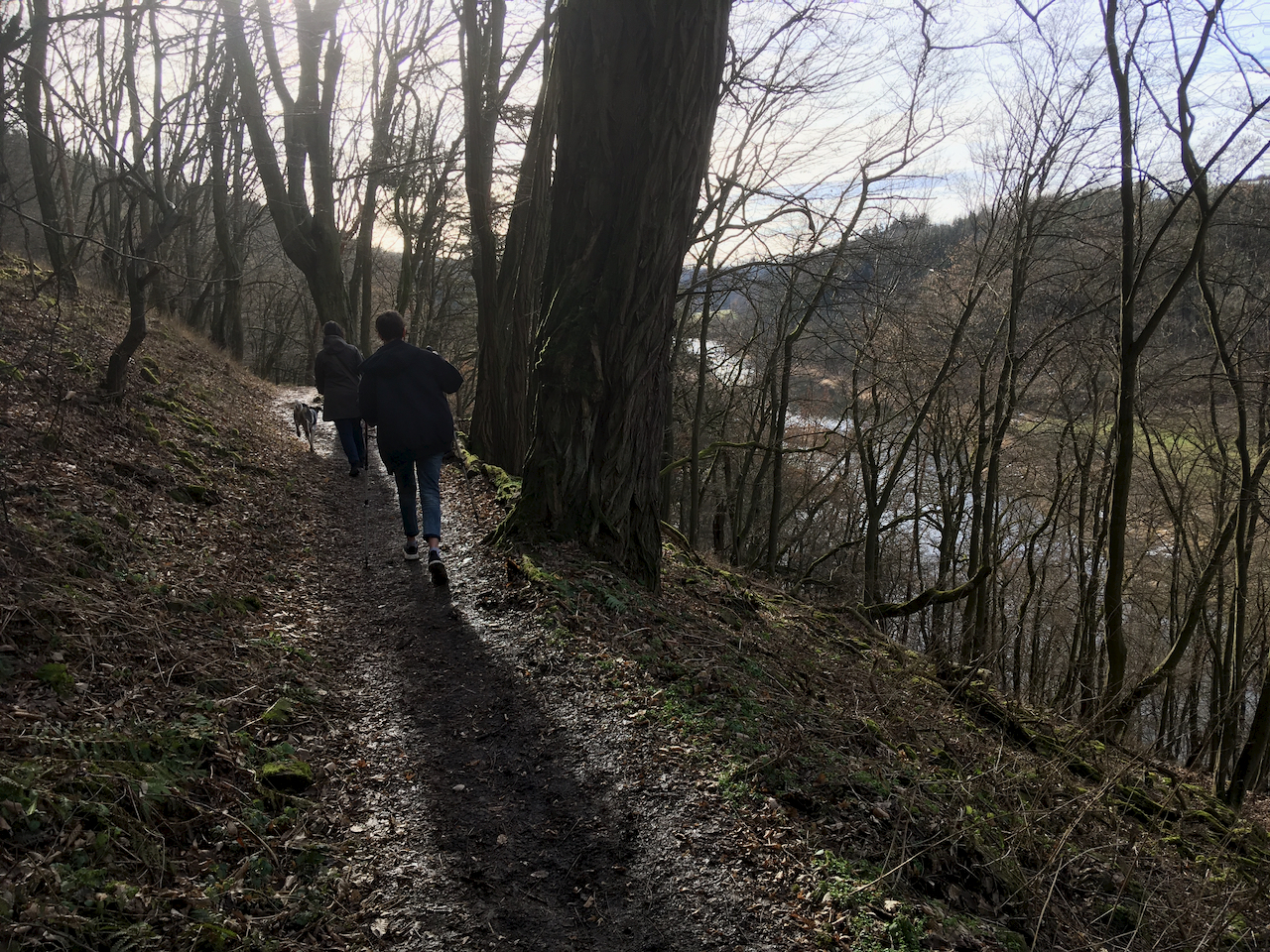 The silence of the river valley, as we followed the trail to the ancient ruins, was broken only by the sounds of birds. There were no cars or trucks to be heard here. No table saws cutting wood, or aircraft flying overhead. For the better part of our journey, we walked in silence, with the exceptional calls to Otik, as he picked up the scent of some animal and began to hunt. When we did break the silence, it was to comment on the different bird songs, the fact that there weren’t scads of other hikers, and the comforting warmth of the sun. Every now and then we would stop to admire the river below, wondering how long before the castle would come into view. 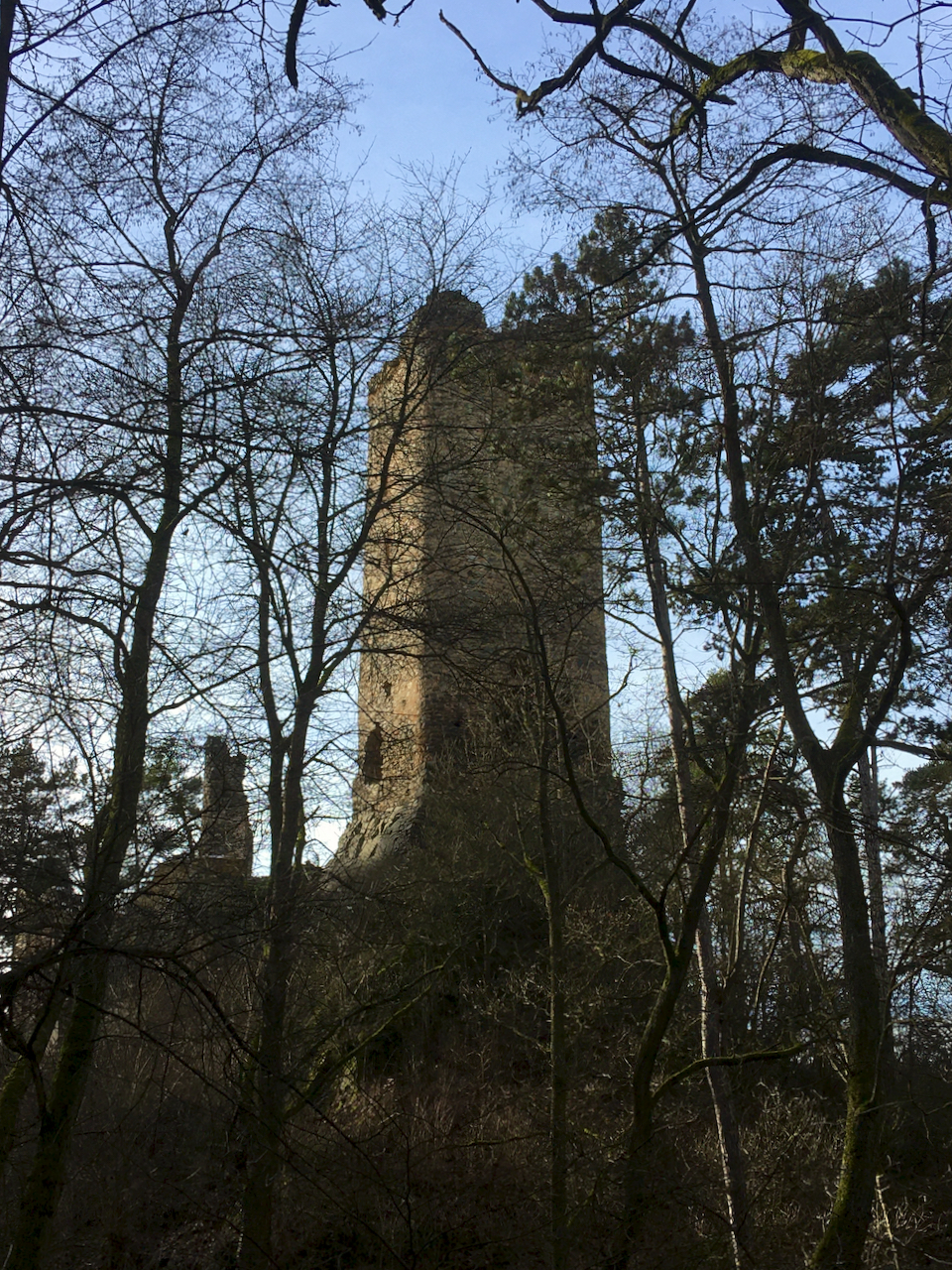 And there it was, just around that last bend, a single tower standing taller than the trees that concealed it. Down we went, into a creek bed, then back up to a campsite, where a sign posted some historical details. A story about the Lords that once ruled here. Another sign beckoned us to each carry a stone up to the tower, as the price of our admission, to help with the reconstruction. There were no shortage of stones to be found and carried up the path that led to the tower’s base. 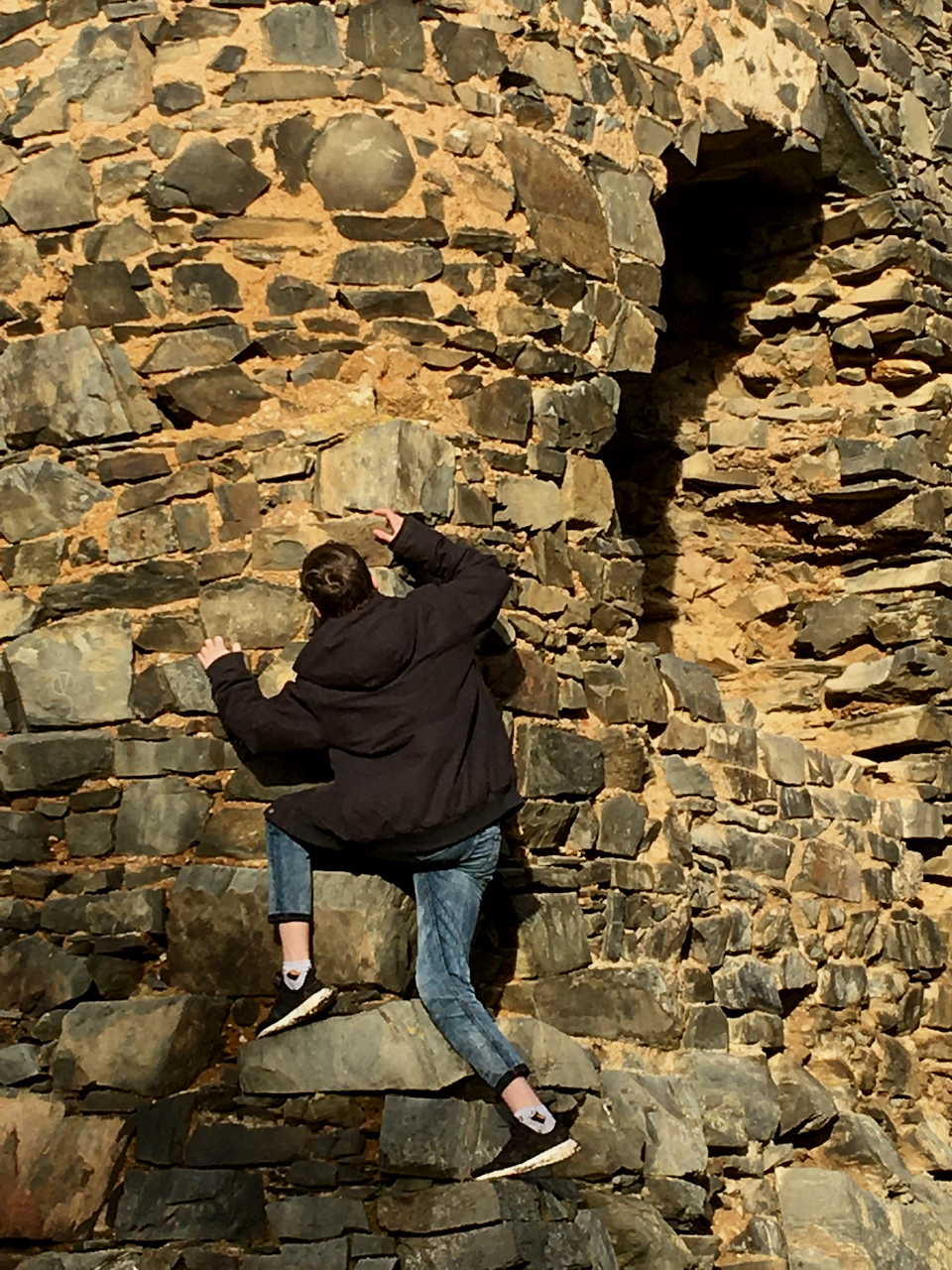 Our 13 year old, who had initially balked at the thought of this outing, was now our scout. He was beside himself with energy, imaginary battles, ways to set siege yet again, and conjuring secrets of some hidden treasures to be discovered. Indeed, this had not been some small fortress, but an impressive seat. From the tower's base we could see the remains of walls, upon consecutive walls, circling us. And while little more than piles of rubble are left as witness, it was not difficult to imagine a palace that once commanded the respect of those traveling the river below. 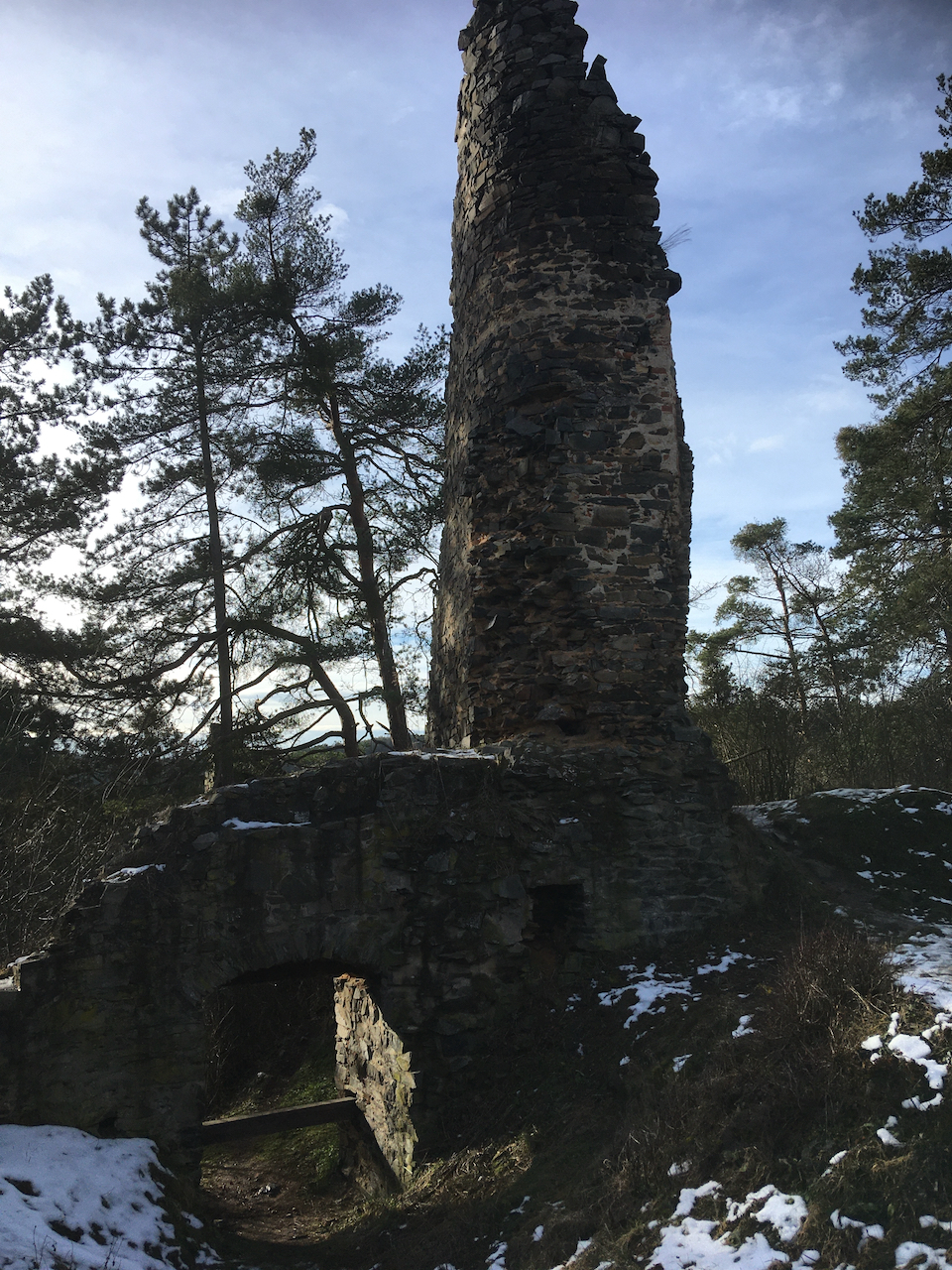 We returned to Liblín on the path we had come, the sun now lower. A cool breeze reminding us that Winter is still upon us. Days like this pass all too swiftly. We yearn for the sound of canoeist and camper, children playfully re-enacting mythical tales of chivalry and cunning. But I was glad for this day’s distractions, for this quiet retreat, and the prospect of returning to the path ahead. Perhaps in a week, I will visit another castle ruin, on the other bank, and it will be covered in snow. Instead of carrying stones for reconstruction, we will then storm the castle with snowballs. Another walk in the country, and a day in the life...