A rather cliché observation, from the day after 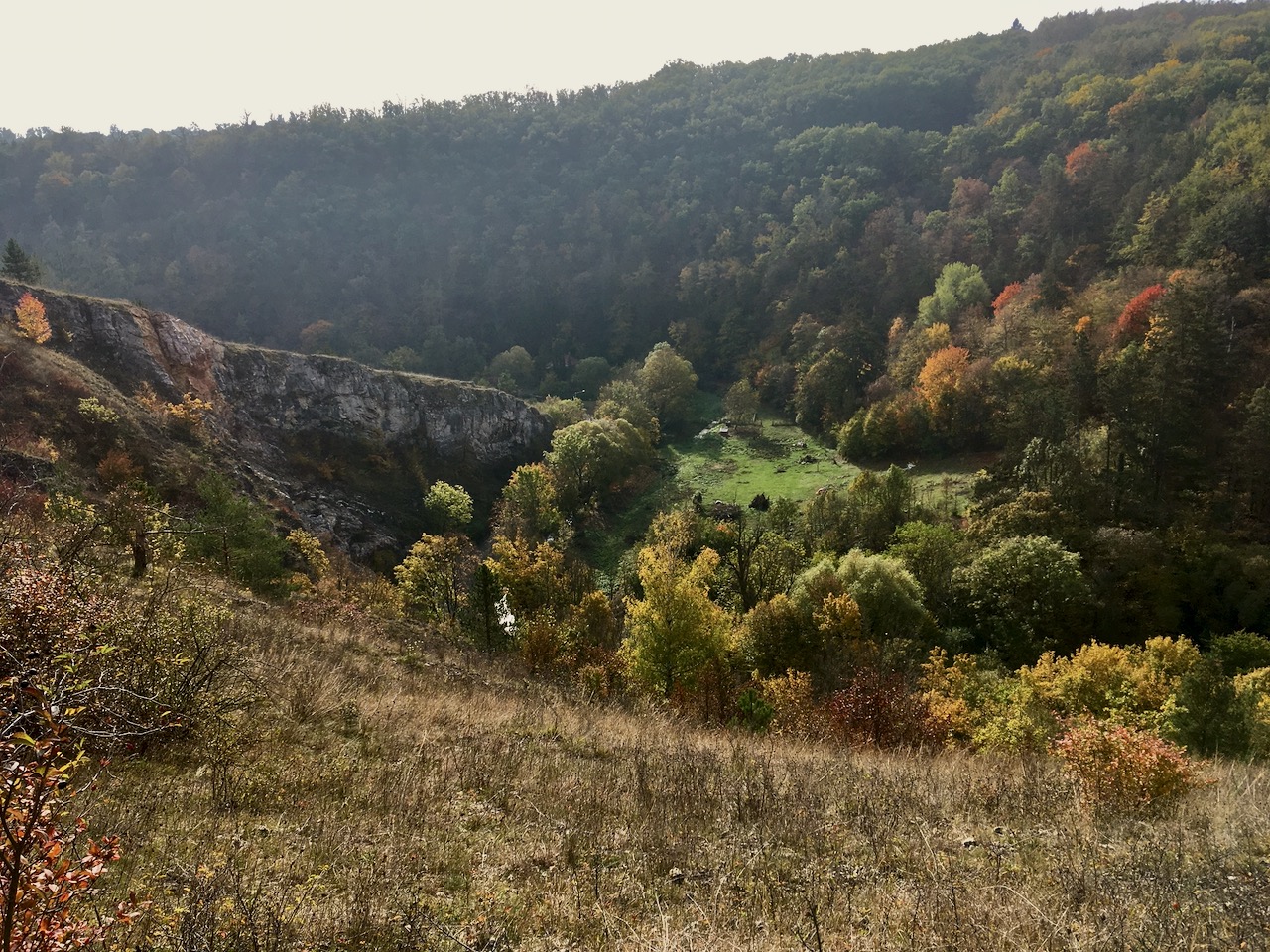 two wonderful days of walking. I was thirsty, tired, and awkward. The full glass of beer and  laptop computer were the props in a divine comedy. A comedy of error. Let's not start at the end, though, but instead with the first steps across a flat boring plain, yet undeveloped, the asphalt is already laid. 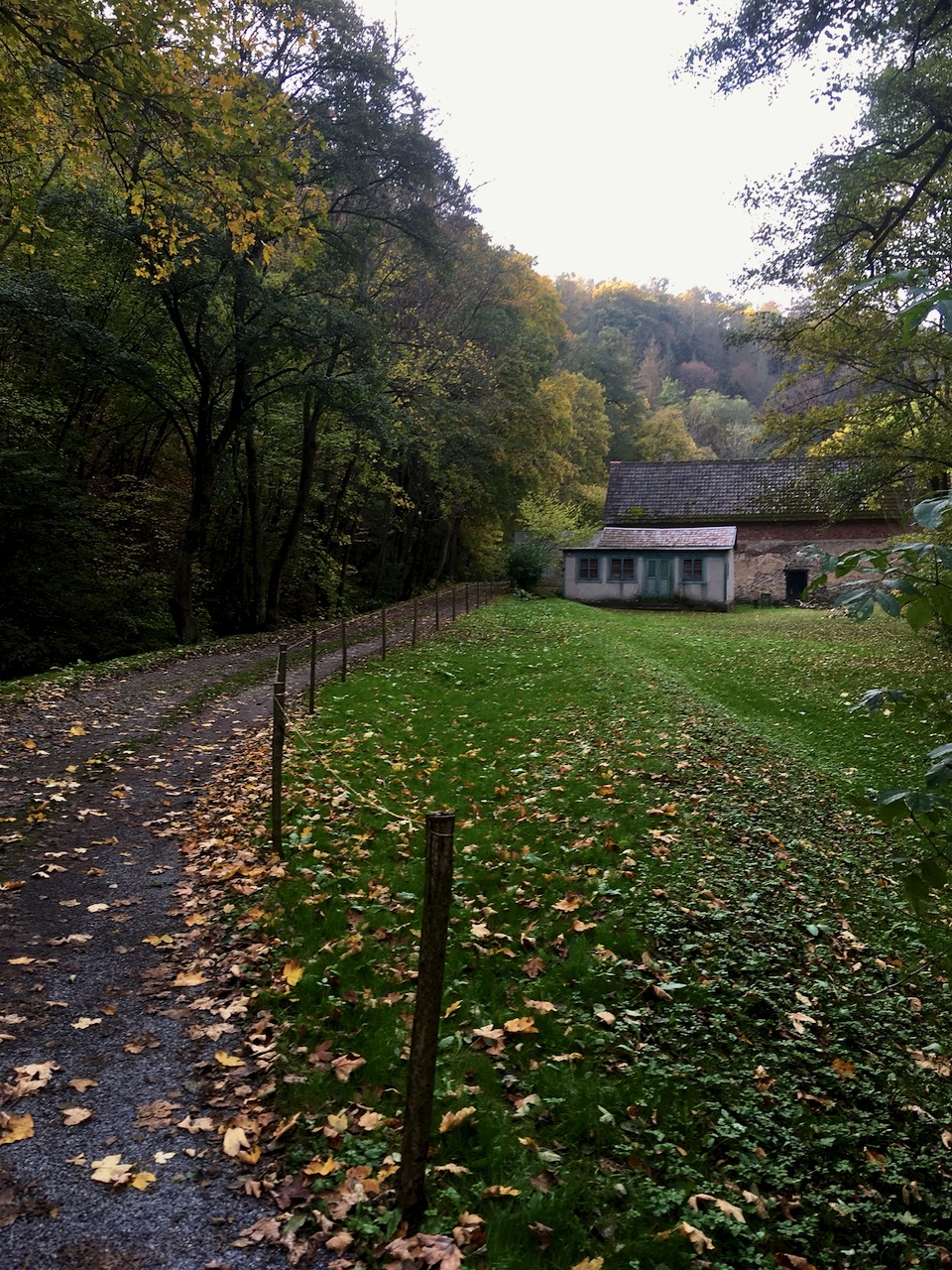 My day began with a hurried ride to the upper edge of our little village, a neighborhood of Prague. Marie was on the phone with her mom, who was waiting for her, thus, she quickly dropped me and Otík, our dog and my traveling companion. For both of us this was nothing new, to walk. For the first time, however, the destination was farther away. It took more than 1 hour for the terrain to match the hopes of either one of us.

Nevertheless, we were on our way, following a red marked path between Slivenec and Lochkov, down in Radotinské Údolí, past the powerful transformers, where the sky was crossed with wires that seemed to come at us from all directions. As long as we were in earshot of the static buzz and roar, a tireless flow of motor vehicles and electric energy, the leash was pulled tight. This was not the quieting walk I had looked forward to. Our destination was still a long way, and only when I read the warning signs, and could see the vast open quarry below me, could I appreciate just how big a footprint Prague fills. 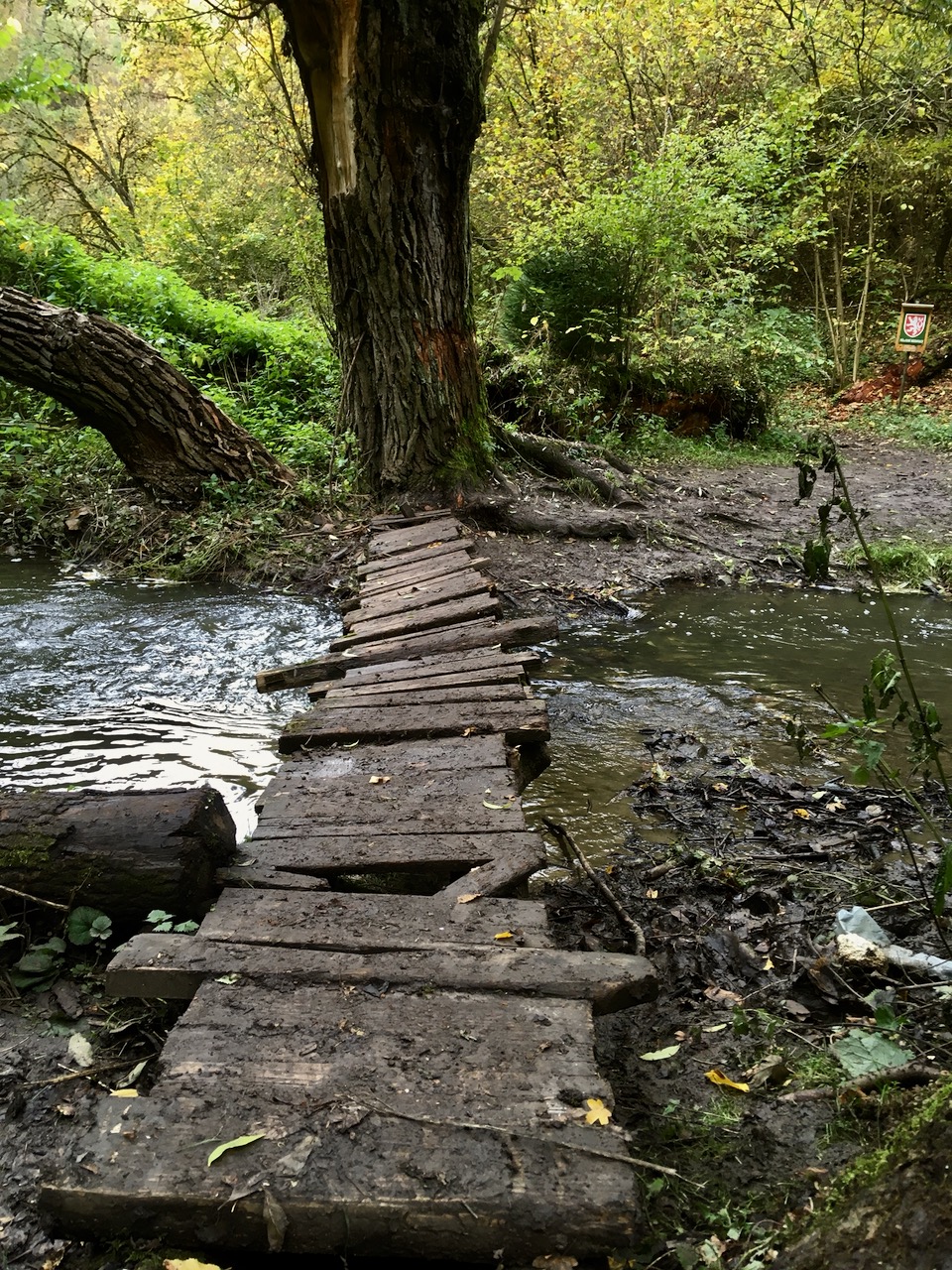 Descending down the far side of a limestone outcrop was a relief, interrupted by only a lone motor cyclist to pass us, in full regalia on a dirt bike with the engine off. Otherwise, we were alone, and the sounds of man faded into nothing on the breeze. This was paradise, and we were half way there on the first day.
The more steps we took, the further off road we went, until finally arriving to a bridge that was not to be crossed. Otik was happy to take a romp in the quick and muddy stream, but I had to shed some weight, thrown to the other side, and thus committed, to jump in as a poor excuse for leaping from one bank to the other. This was my baptism. My thoughts and troubles now felt so much lighter. There was no turning back. 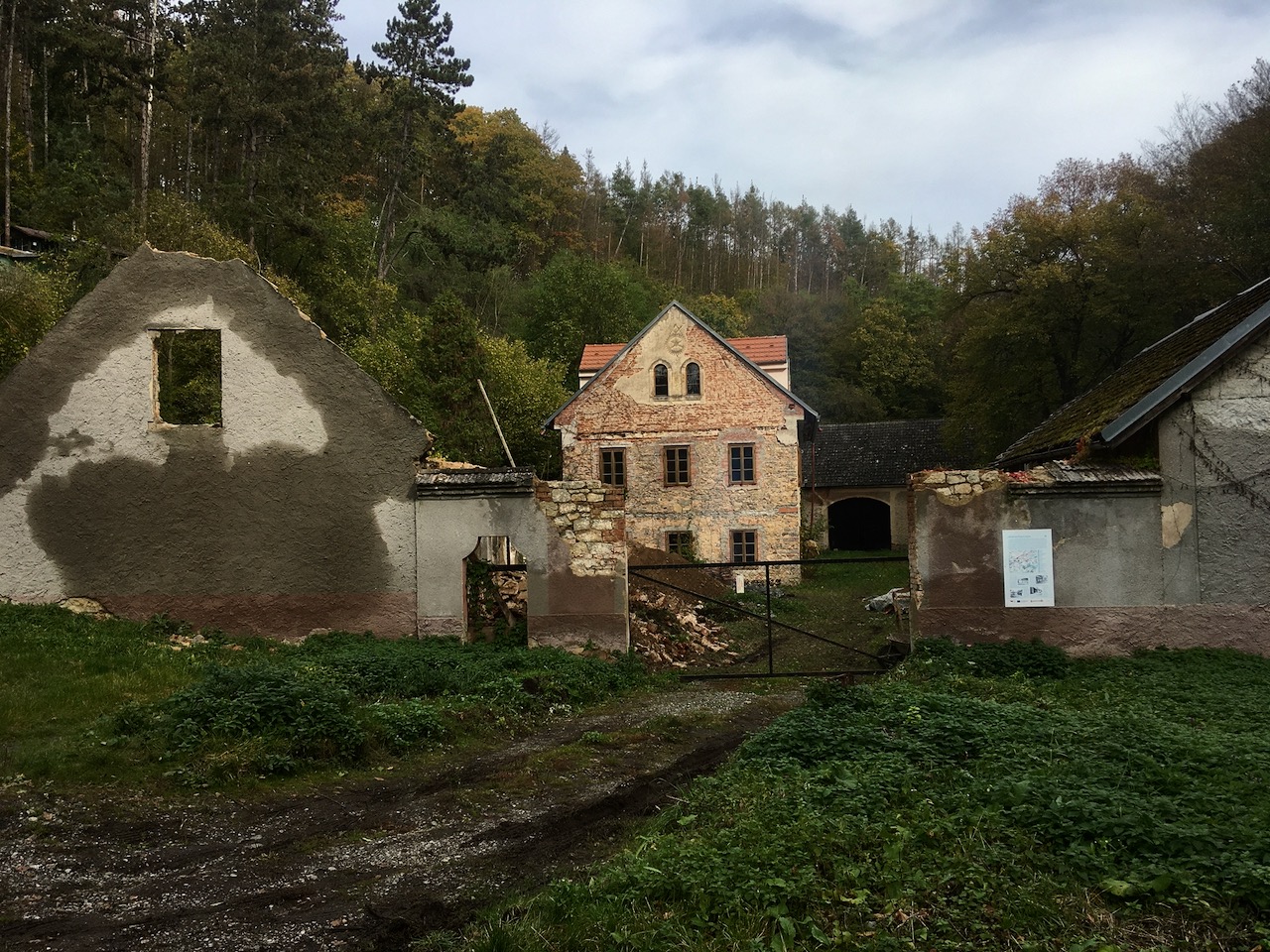 Another kilometer further, I passed the remains of an old mill, once prosperous, now after years of neglect, seeing the first attempts to restore this grand old structure. At this point in my journey there came an intersection of trails. I choose the blue trail to climb out from the valley, towards Třebotov. I found an old Jewish cemetery on the map a day earlier, and also the údolí I followed was wet and difficult with mud. I was ready for the horizon of a plain with a view of the countryside.
I walked up, passed weekend cottages, mostly 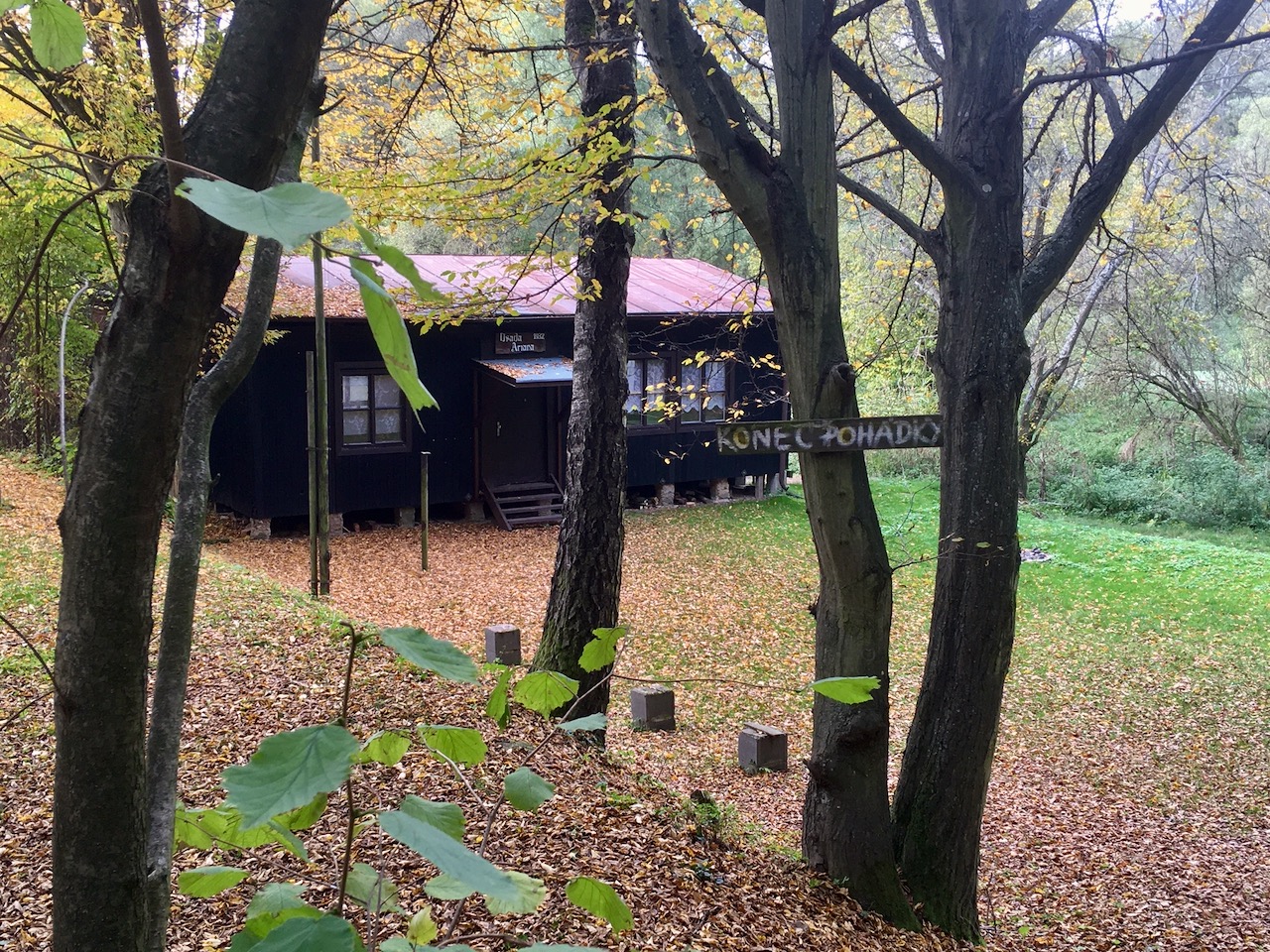 quiet and lonely, but full of imagined stories. The large freshly turned fields were a welcome change from the mud, but without any trees for markers, I had to keep my eyes peeled for direction. There in the middle of a rather large emptiness, at a crossroad without a sign, I spied in the field, on the leg of a giant skeletal tower used to suspend electric power lines (no matter how far you walk, it seems they are always there) the mark for my trail. I was not lost. A tractor passed me, with a friendly nod from the farmer, then climbed out of sight. Another Kilometer and I was in Třebotov, but unfortunately I had forgotten about the cemetery due to my hunger. I found a stump to sit and eat, then continued in haste, eager to move on. 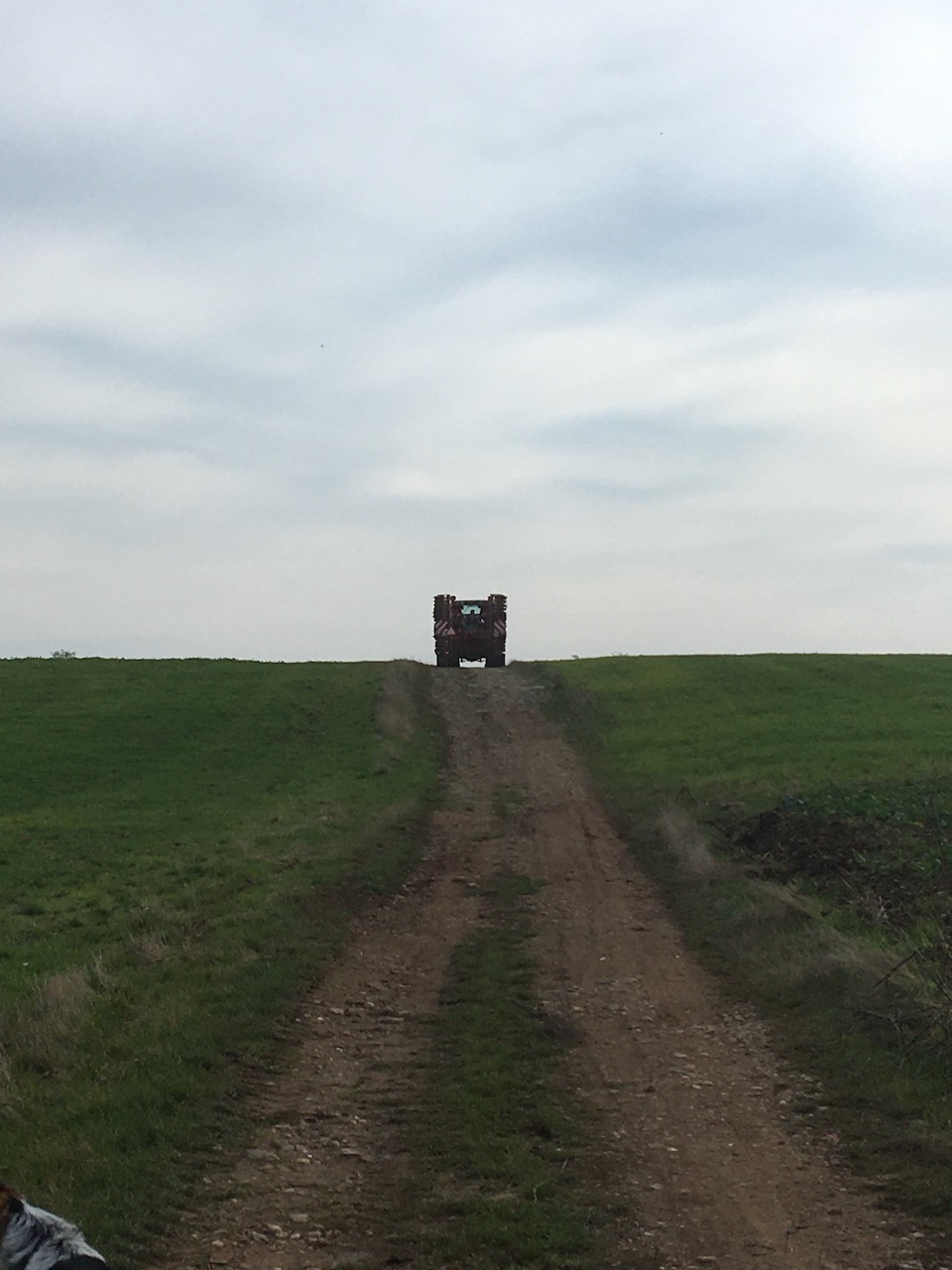 When I finally descended the long descent through a quiet mixed wood forest, I was ready to find a place to sit and to digest the many thoughts and feelings that came flooding through me as I reached Černošice. I rested for a moment at the monument to the soldiers who had fallen, placed in a small plot, below a proud Linden tree, and across from a church. I know these places well. This monument reminded me of the many others I had visited over the years. I missed the life I had known, but I was happy to be on this path that brought me back to the things I truly love. 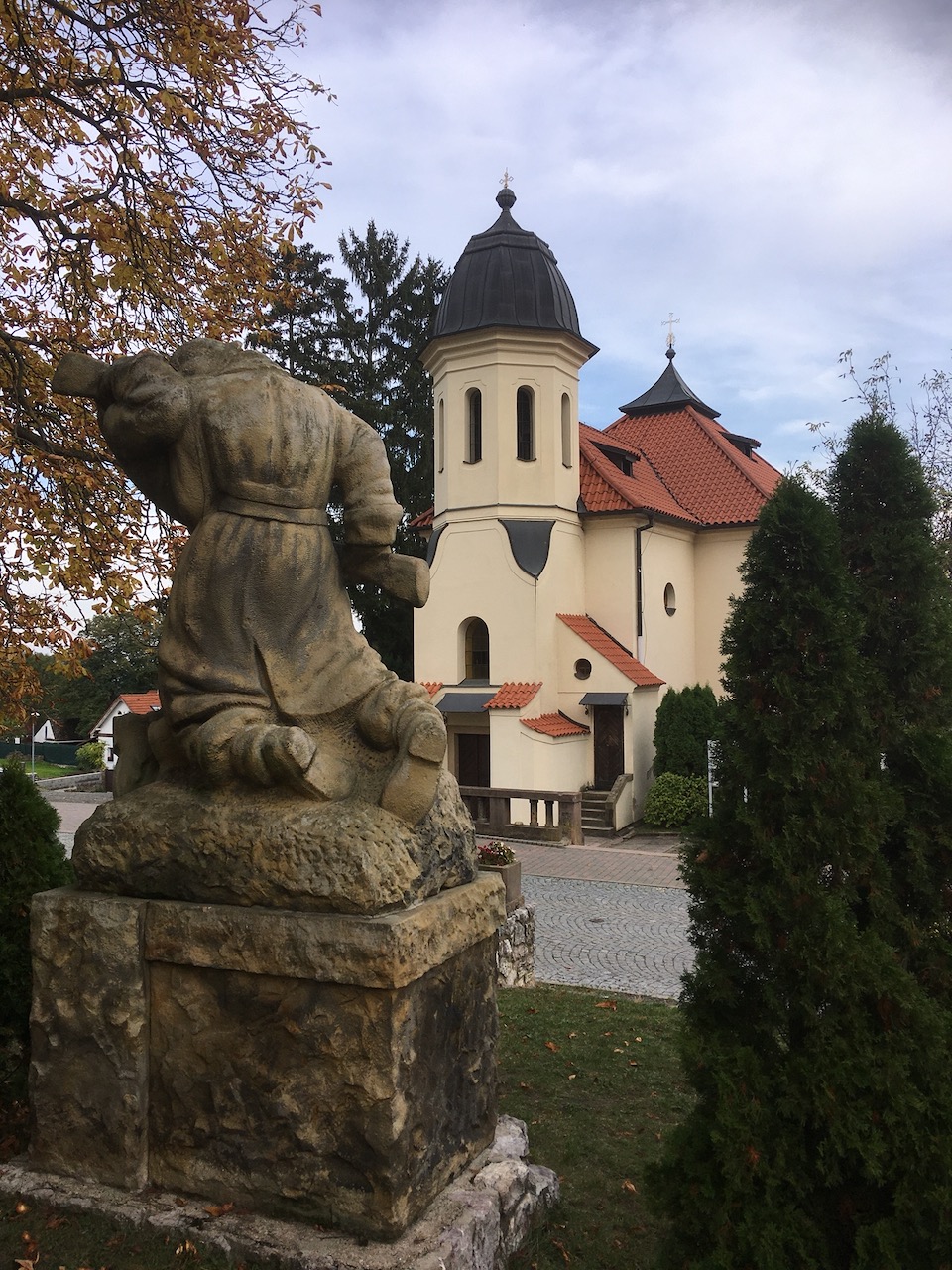 This was the end of only the first day, and as we rode the train back to Prague, it dawned on me that this day was the most important, but it may seem smaller and less significant as the adventure unwinds. I thanked my feet and legs, my lungs and my heart for carrying me so far. And I looked forward already for the next day, though today I did not think I could take another step.
Day 1  https://en.mapy.cz/s/dugaluzele
« Return to Articles & Literature