Another Day - Another Castle - Day 10 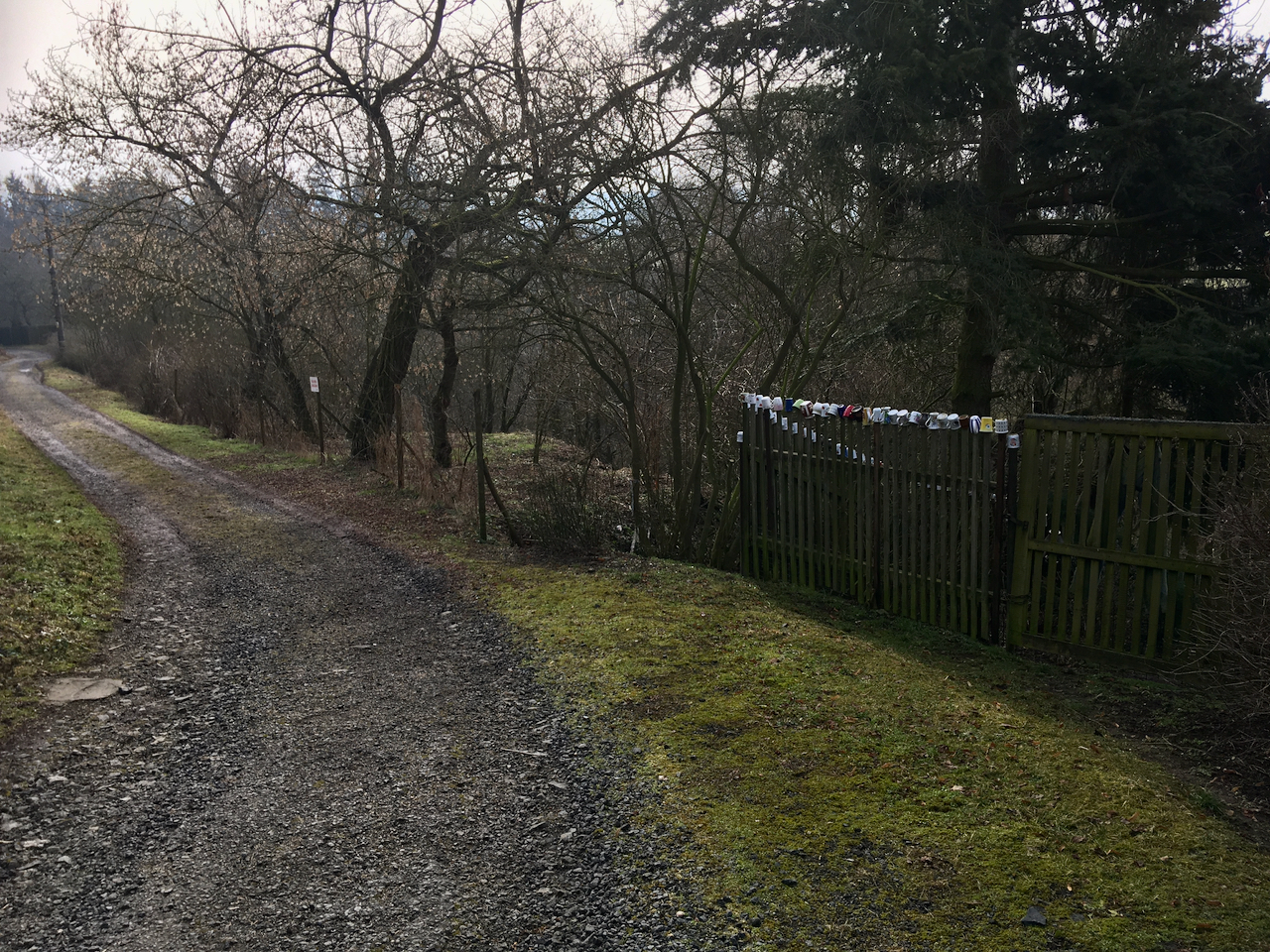 It’s about 45 minutes to drive from our cottage in Branov to the village of Kozojedy, across the Berounka River from Liblín, where our walk ended in Dec.. The roads here are narrow and curve endlessly through the steep forested terrain. Occasionally they emerge from the wood, to follow the river below stone walls, or onto meadows and fields wherever the land is flat enough for agriculture. These are the familiar landscapes, held together like pieces of a puzzle by the intermittent villages of the Central Bohemian Karst. 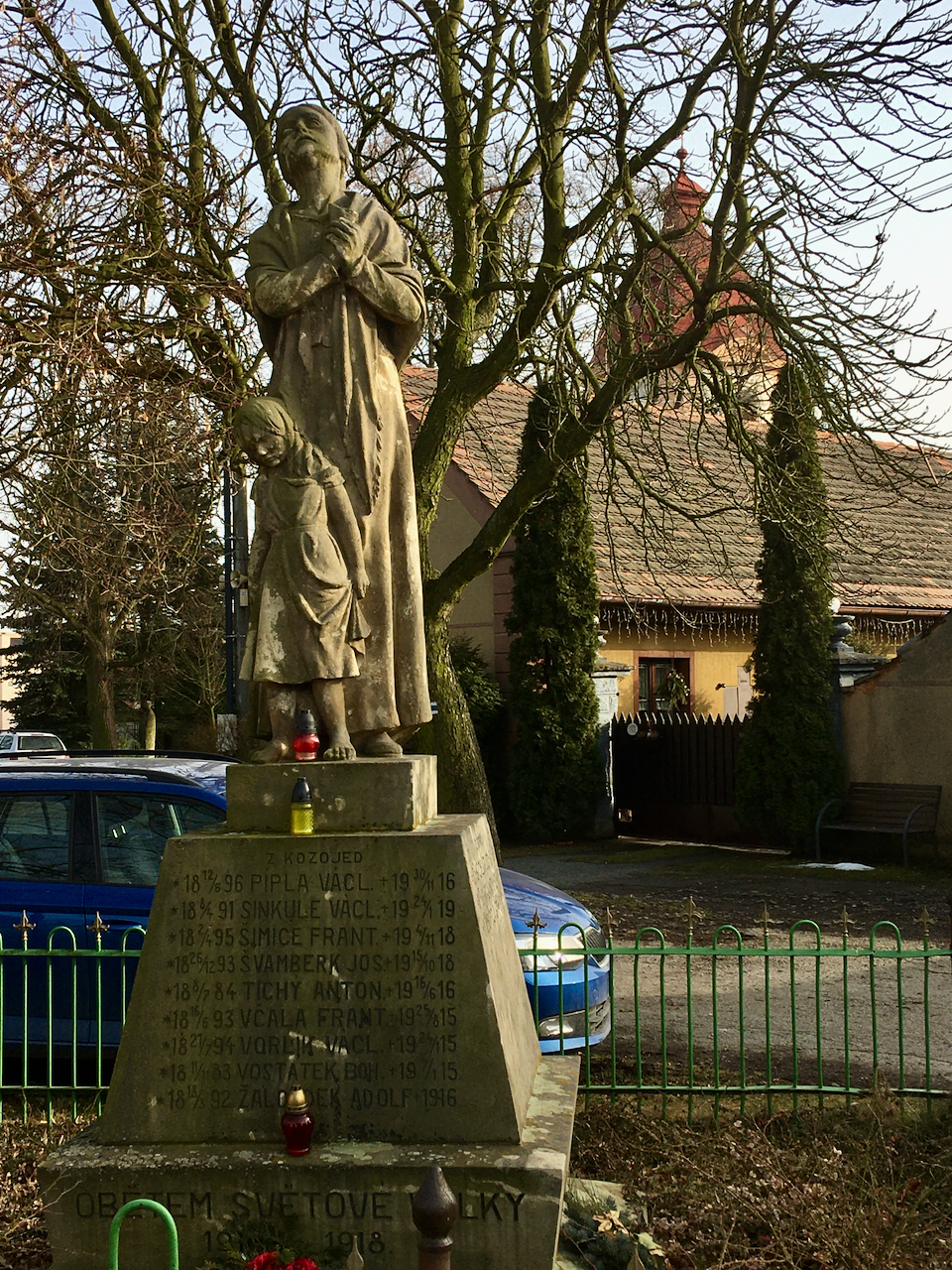 Today’s journey set out from a small square, with a baroque church, a small playground and a war memorial. While typical of so many villages in the Czech Lands, this one has its own special charm. It is enriched by sundry sandstone figures carved by local craftsmen. Their talents are evident in the clear expression of the imaginary figures that adorned the village.

We followed the blue trail markers to the remains of a 13th century castle. Krašov was one of the first fortified castles built by a nobleman in Bohemia. The path led us first through tall stands of spruce in thinly wooded ravines, lush with green moss. It was cool in the forest, and the trail was moist, but not muddy or difficult to walk. It was the perfect start to a wonderful hike, and I was in great company. 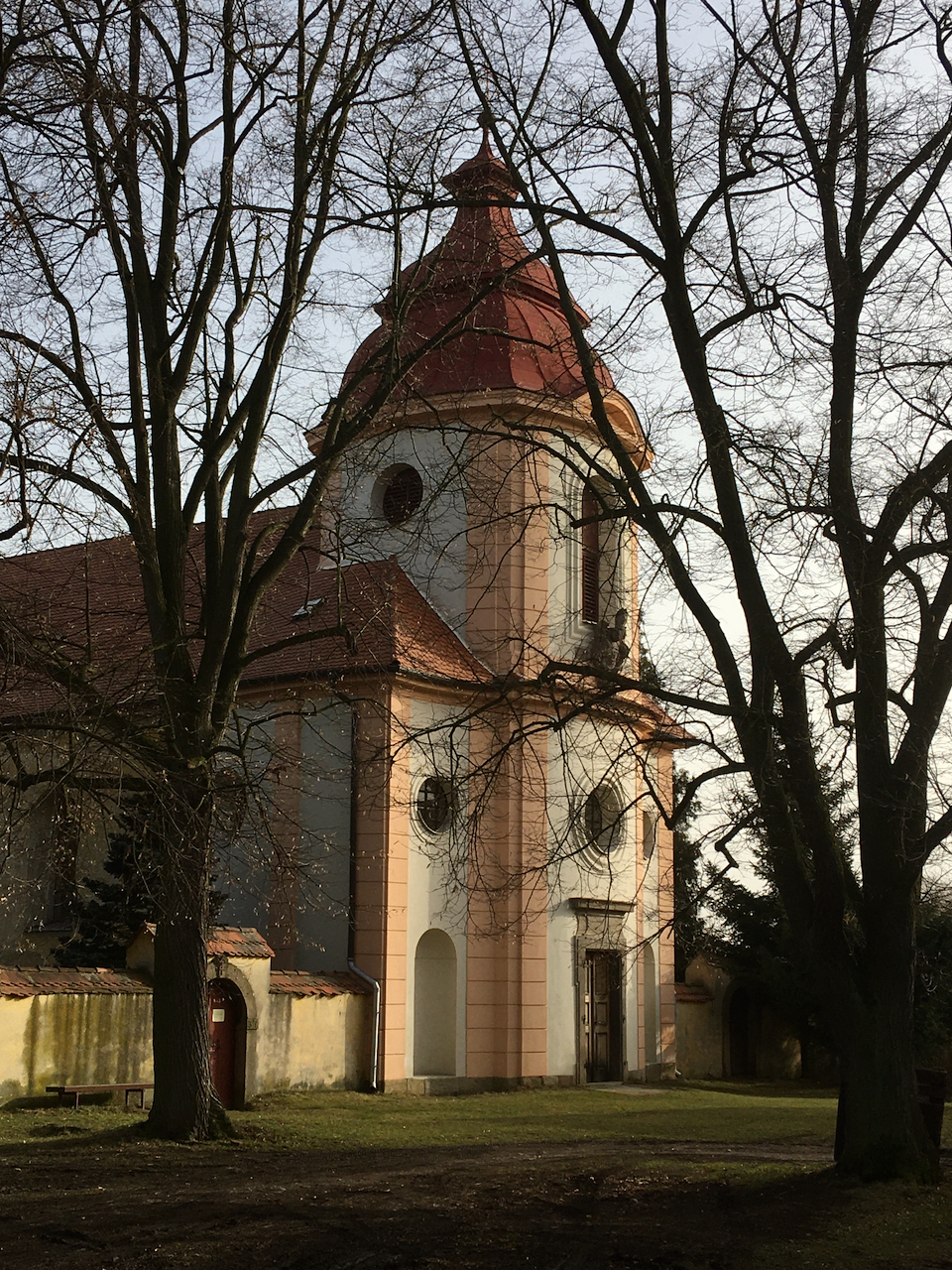 Unlike the previous “pilgrimage” walks, this was a circular journey, returning to the same place from which we had set out. Thus, we parked our vehicle in Kozojedy and could journey together for the entire day. It was not necessary to return via the same path, as a yellow trail marker also leads to the same castle. The 11 Km overall distance was ideal for two teenage boys, a couple of 40 something adults, and this old goat.

Half way to the castle, we stopped for a sandwich and refreshment outside the village of Bohy. Beside a pond, the village placed a covered table with seats. Places like this are always welcome on long walks. During the pandemic it has not been possible to find restaurants, and there are very few villages in this part of the country with open shops. With this in mind, Marie had prepared well for this day. The sušenky (treats) would have to wait until we reached the castle. A great motivation. 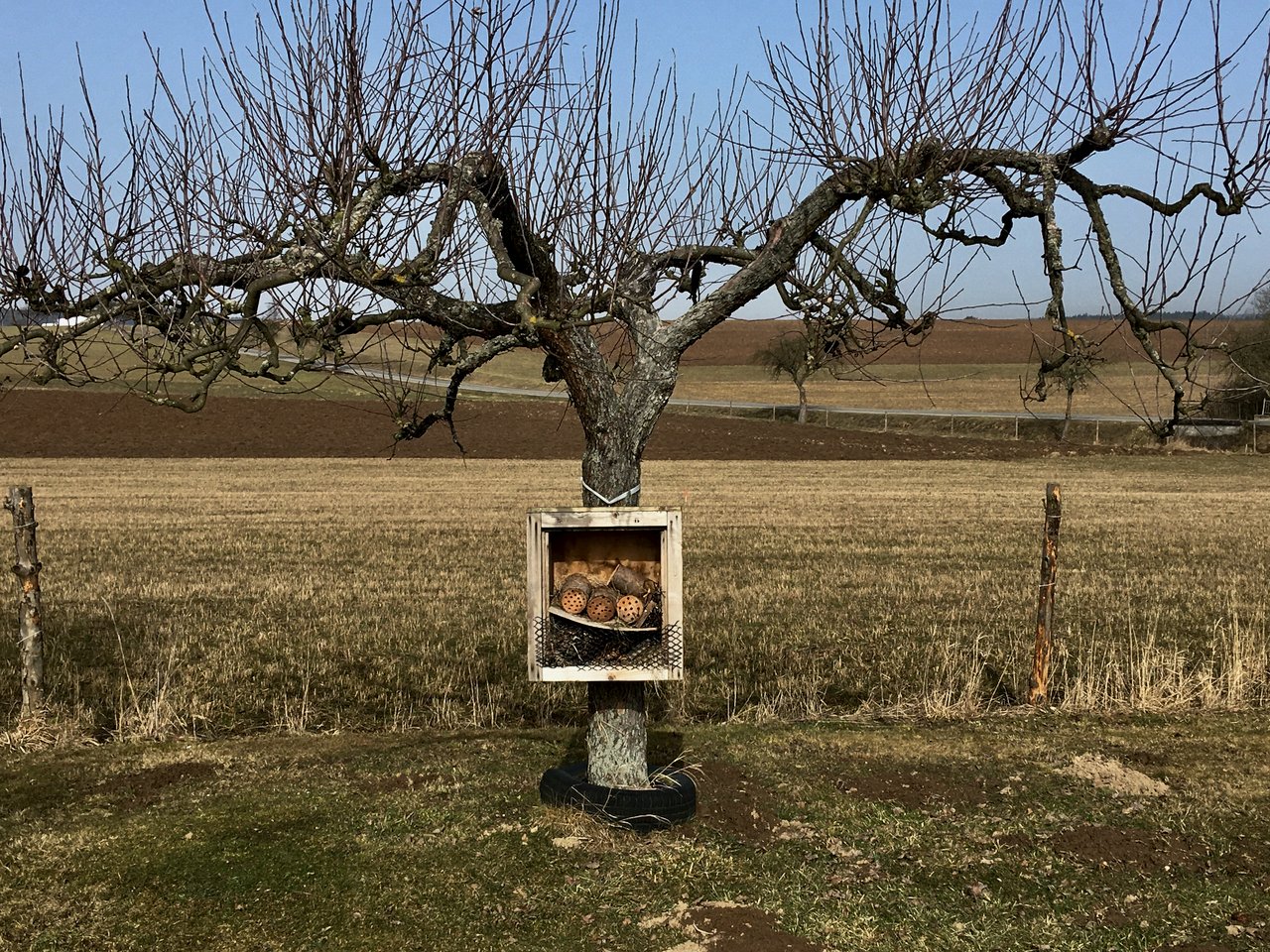 It was not too long after we departed from Bohy, which incidentally is an incredibly picturesque small village, with beautifully maintained rustic baroque farmhouses, that we found ourselves back along the river, looking up at the sunlit walls of the castle ahead. It was still about 1 Km away, but the path was level and our pace lively. It’s amazing how the view of some destination can lift one’s spirits. 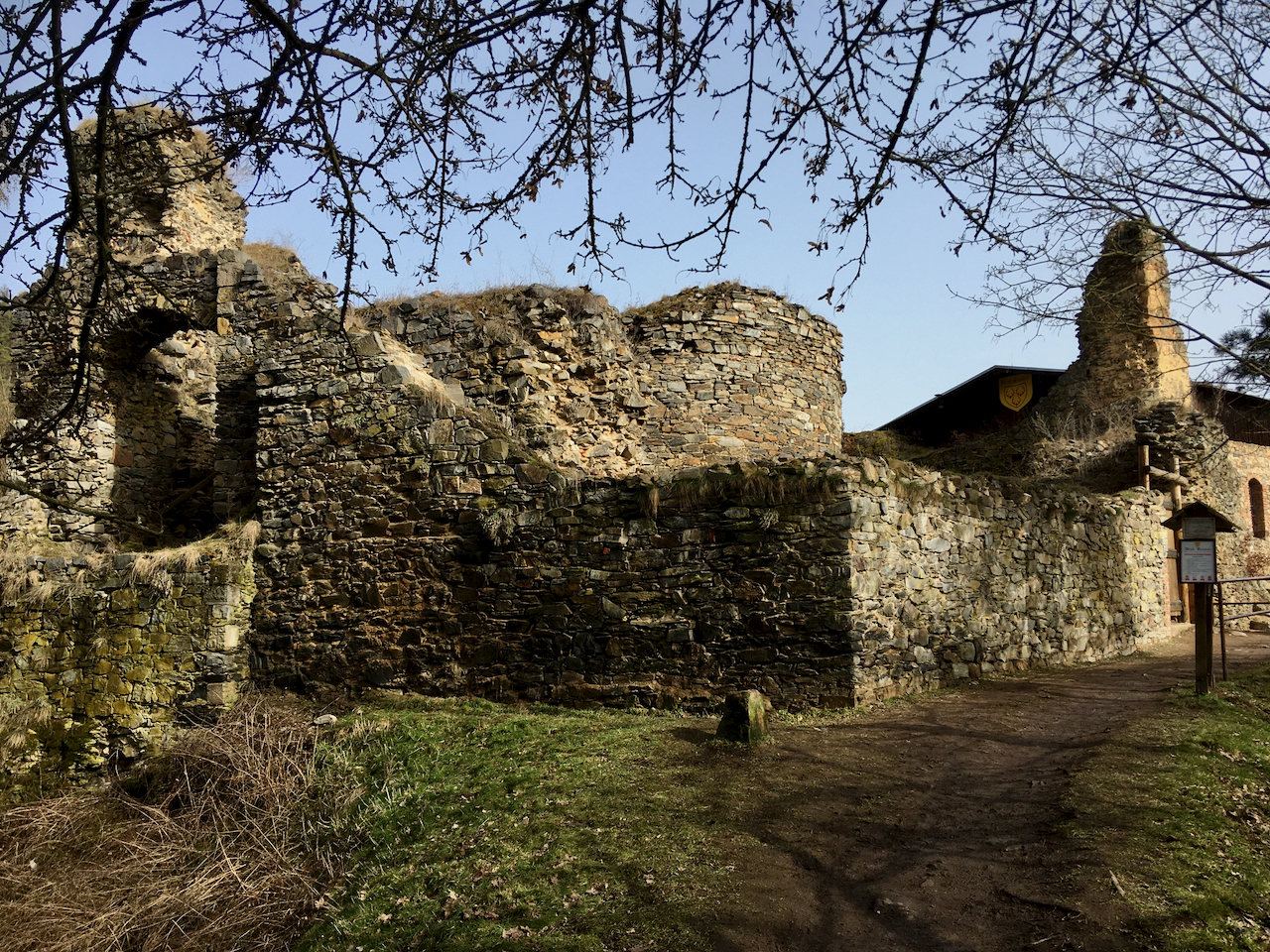 Unfortunately, when we arrived, the castle was closed. Nevertheless, we had arrived, and the view of the castle above the meandering river below was worth the journey. We did not linger too long, but instead explored a nearby cave and viewpoint. These gave us an abundance of ideas about what we might do later, in another season when the forests were thick with leaves and campers, and the river full of canoeists. The boys imagined what it would be like to return in the summer and spend a night, and for a moment I too was a 13 year old again, sharing this dream with them. 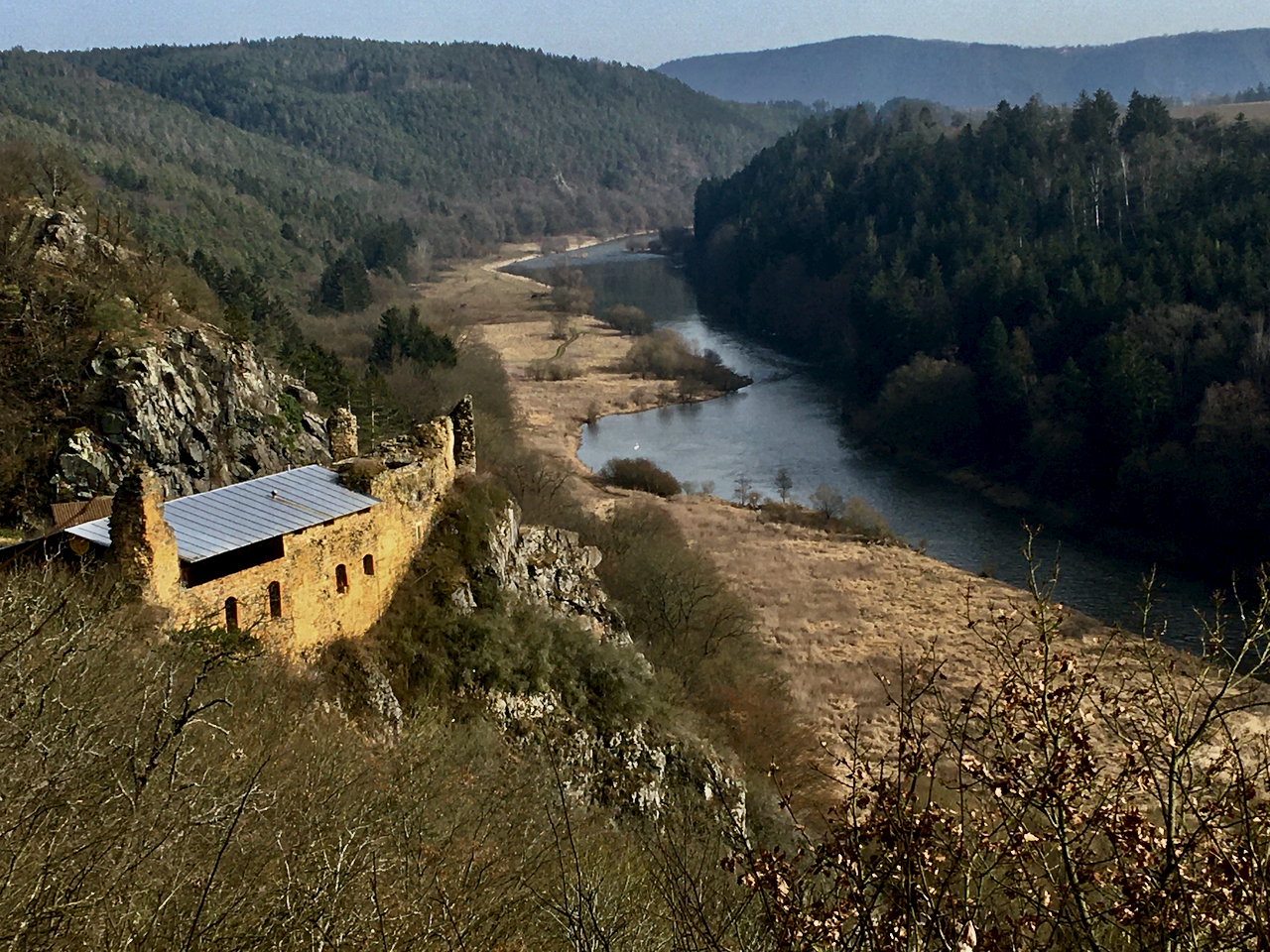 The walk back to Kozojedy on the yellow trail, was not nearly as nice, as the conditions of the path were muddy and difficult to walk on. Wherever possible, we took to the meadows, but these too were moist and slow going. Historically, this had apparently been the way that the Cistercian monks had come in the 18th century, when they would visit this place as a retreat. Their handiwork could still be found in the system of reservoirs and water channels that we followed. This was also the more popular approach, as we had not seen another person all morning until we got on this path. The condition of the path was impacted by the moist soil and heavy foot traffic, but even more so by farm vehicles. 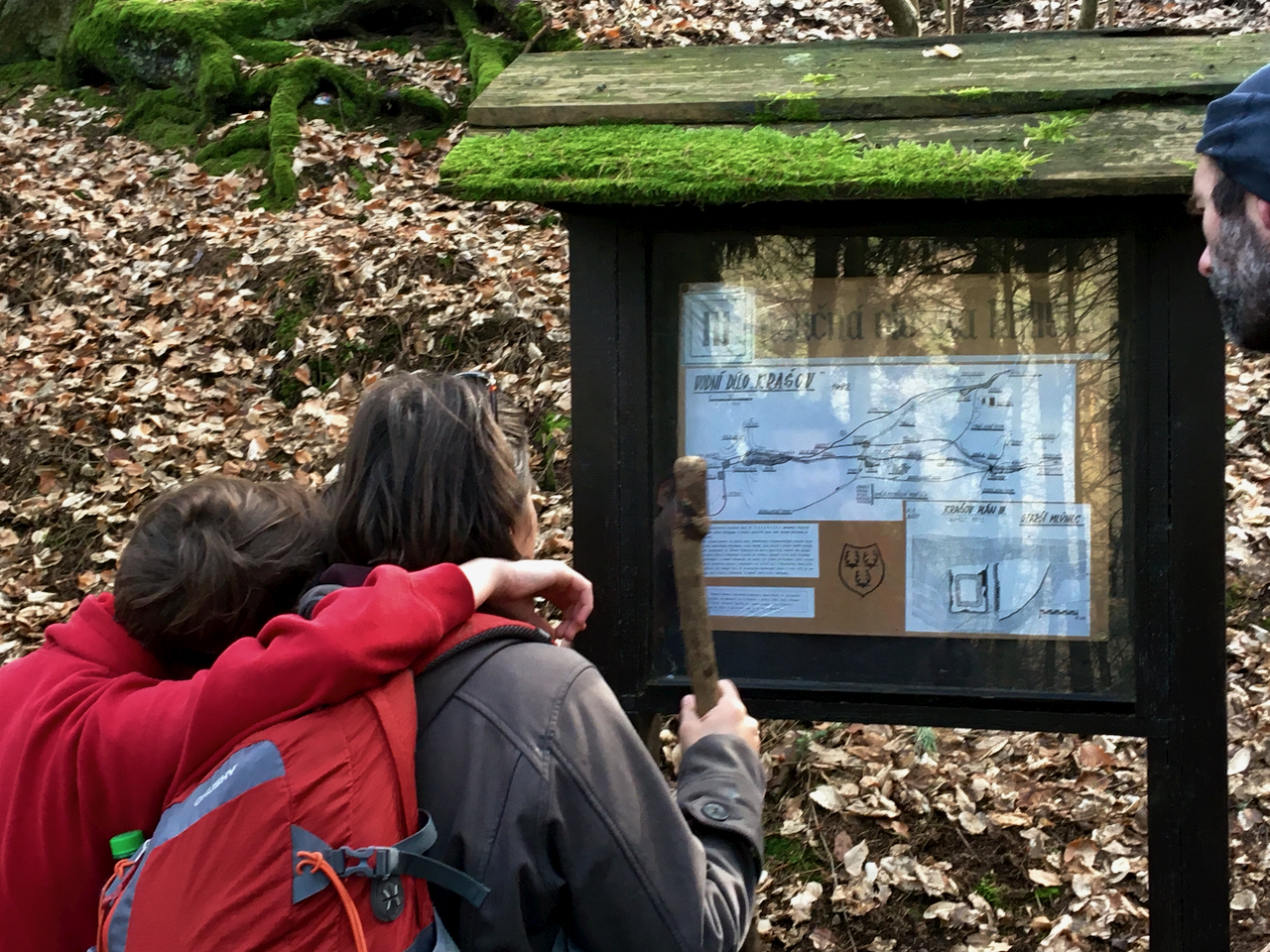 We were glad to finally reach Rohy, which for all intents and purposes is a solitary large farm, built in 1737 by the Cistercian Abbot Evzen Tyttl. One of many throughout this part of West Bohemia. This farm is one day’s journey by foot to the Monastery at Mariansky Tynec, on the Way of St. James. And so, I began to feel the longing of the pilgrim again. It won’t be long before the Spring.