This day began, after three days at our cottage. While there, we managed a climb up nearby Štulec (539m) for some foraging. Marie had her heart set on this since her broken ankle a year ago. The difference between foraging and walking along a path, even a steep path, it is how we adapt to an uncertain surface. In this respect foraging is far more difficult on the knees. Unless one is careful, the way of no path is treacherous. I suppose this is why we do it. Although it is slow and challenging, far more attention is given to the way each foot touches the ground. 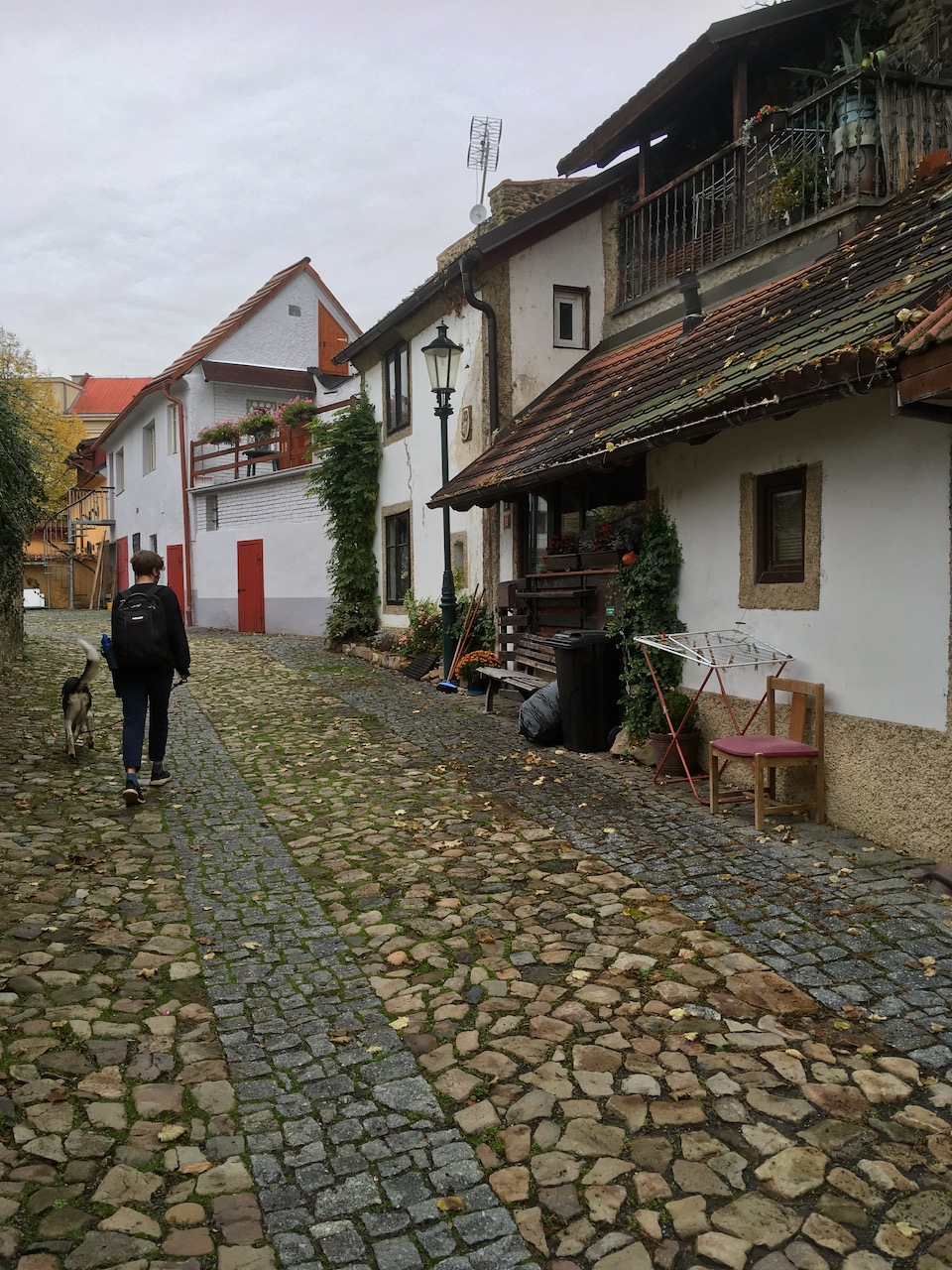 For many years now I have come to Branov, following the Berounka River, by train, bus or car. Never on foot. Initially, I imagined it would take 4 days, and along the way I would camp or stay in pensions. Since COVID has closed the pensions and it is too late in the season for camping, the plan was adjusted to fit train connections. Thus, today’s trail from Beroun to Nižbor as the train stops in both. It would be an easy 10Km. Marie did not want us riding the train, though, and I agreed. The virus is a growing concern here, and good reason not to take unnecessary risks. We walked the same route, but Marie dropped us off on the square in Beroun, and picked us up in Nižbor.

Vincent and I were ready

to go. It’s not as though we had cabin fever, in fact we did not want to leave the warmth of our cozy little cottage. But it was time to go. We were eager to walk on this particular stretch of hills that look down on the meandering Berounka River. It is a gentle patchwork of forests, meadows and fields. About every 3-4 Km we came to some small village, or a colony of cottages. In between, there were solitary farms, some as old as the path we traveled, and others the creation of a younger generation moving back to the land. Nowhere along our path were we entirely detached from civilization, yet at times we felt alone. On our own.

The first steps from the town of Beroun went through narrow lanes that took us from the square. These were built along the stone walls that once defended this Royal Town in the Middle Ages. The walls were mostly torn down in the 1970’s and 80’s, but the small lane that we walked was an exception. The town evidently knows this lane is special, and has built a small stage for music, a common area, and a bust of Joachim Barrande, a 19th century French geologist who once explored the remarkable terrain we would traverse today.

Climbing a steep road through a neighborhood of early 20th century villas, we found our way to a neo-gothic chapel. The Chapel of Virgin Mary of Sorrows was the trail head, our departure from Beroun. We came across several hikers, runners, people with children and dogs, and young families with prams. They were all considerate, most wearing masks, or allowing us to pass at a safe distance. It was a continual climb until we reached a turn of the century brick lookout tower on Děd. From there we continued on the green Talichov Trail. There were fewer people now, until we reached Zdejcina, a small village with a mixture of modest worker’s housing, and newly constructed residential houses. The village straddles a ridge that looks down on the river valley. From here we took a small dirt lane that took us down through meadows of grazing horses and sheep. 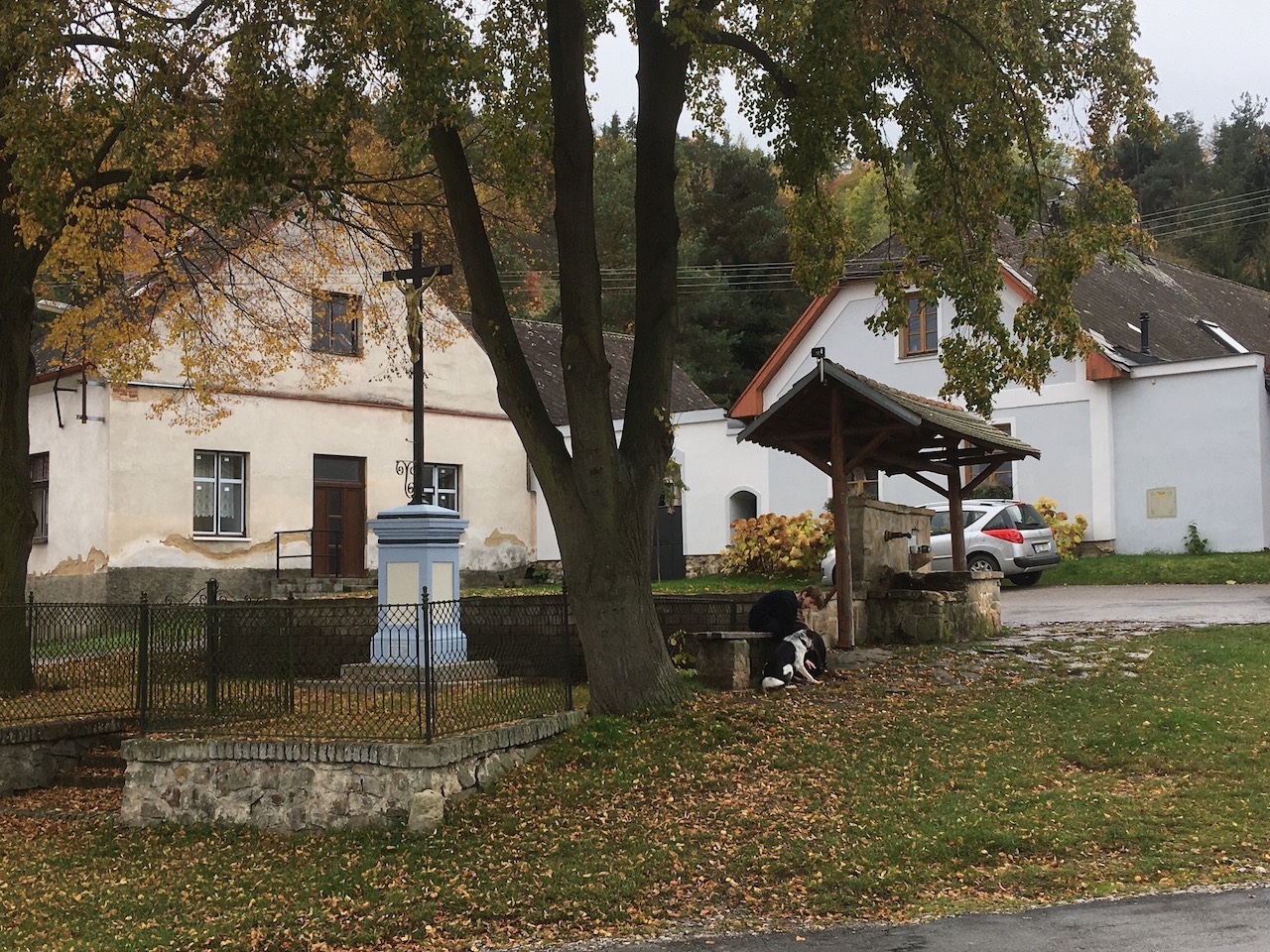 After passing through a small colony of weekend cottages, tucked into a steep ravine, we reached the village of Stradonice. The last kilometer was along a narrow lane that ran parallel to the river. It was impossible to relax on this road, as there were now cars, and Otik, our 1 year old puppy was too excited by the many dogs barking from behind fences as we passed. We finally reached a small square where we rested and shared a snack. We were seated beside a stone spring, constantly flowing, with cups lined up on a fence for thirsty hikers. We had our own bottle. 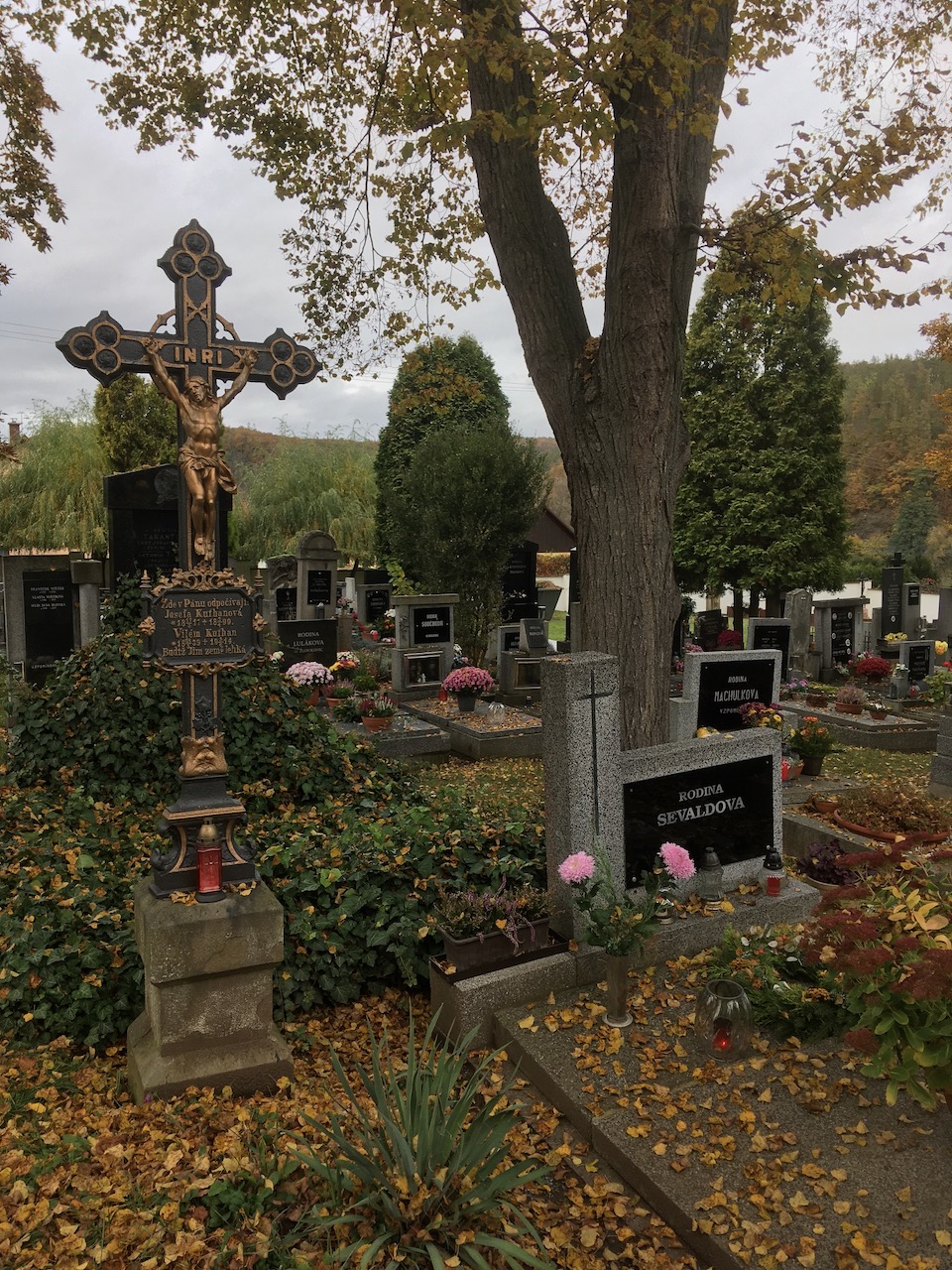 This should have been the most idyllic moment, but it turned quickly when a cyclist arrived, parking directly in front of us, almost at our knees, and panting heavily, without a mask, directly towards us. This was the first incident in my 4 days of hiking when I felt at risk. It was such a contrast to the peaceful moments before. Vincent complained that I was over reacting, making too much of a scene, when I abruptly got up to leave. We moved on, our restful moment interrupted. At a small cemetery, I ducked in for a picture and a prayer. I prayed for strength to overcome my fear and anger toward people who don’t seem to get it. They are unaware of my concerns. I would rather not feel this way.

I made sure that our remaining 2 Km would neither be on the road, nor the bike trail along the river. We went through a 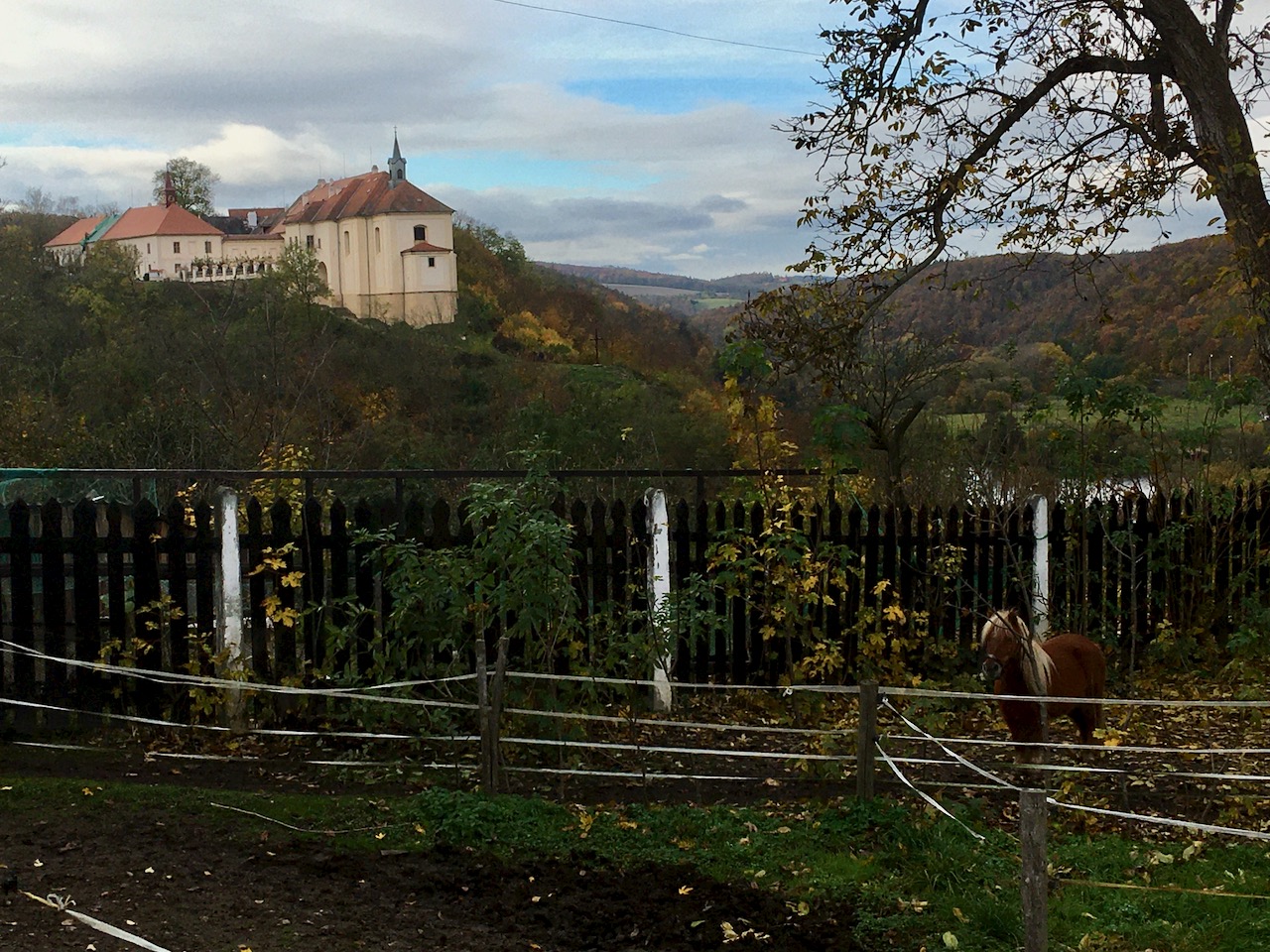 field, following an unmarked path which led us to a rewarding view of the castle overlooking Nižbor. This helped our mood tremendously. No sooner had we arrived in front of the town hall, then Marie pulled up to take us home. There was just enough time to snap a few pictures of a memorial to soldiers who had fallen in the two World Wars. Sadly, today we could not appreciate our father & son hike the way I had hoped to. But my disappointment fell away as soon as I heard Vincent tell his mother that he had enjoyed our walk today.