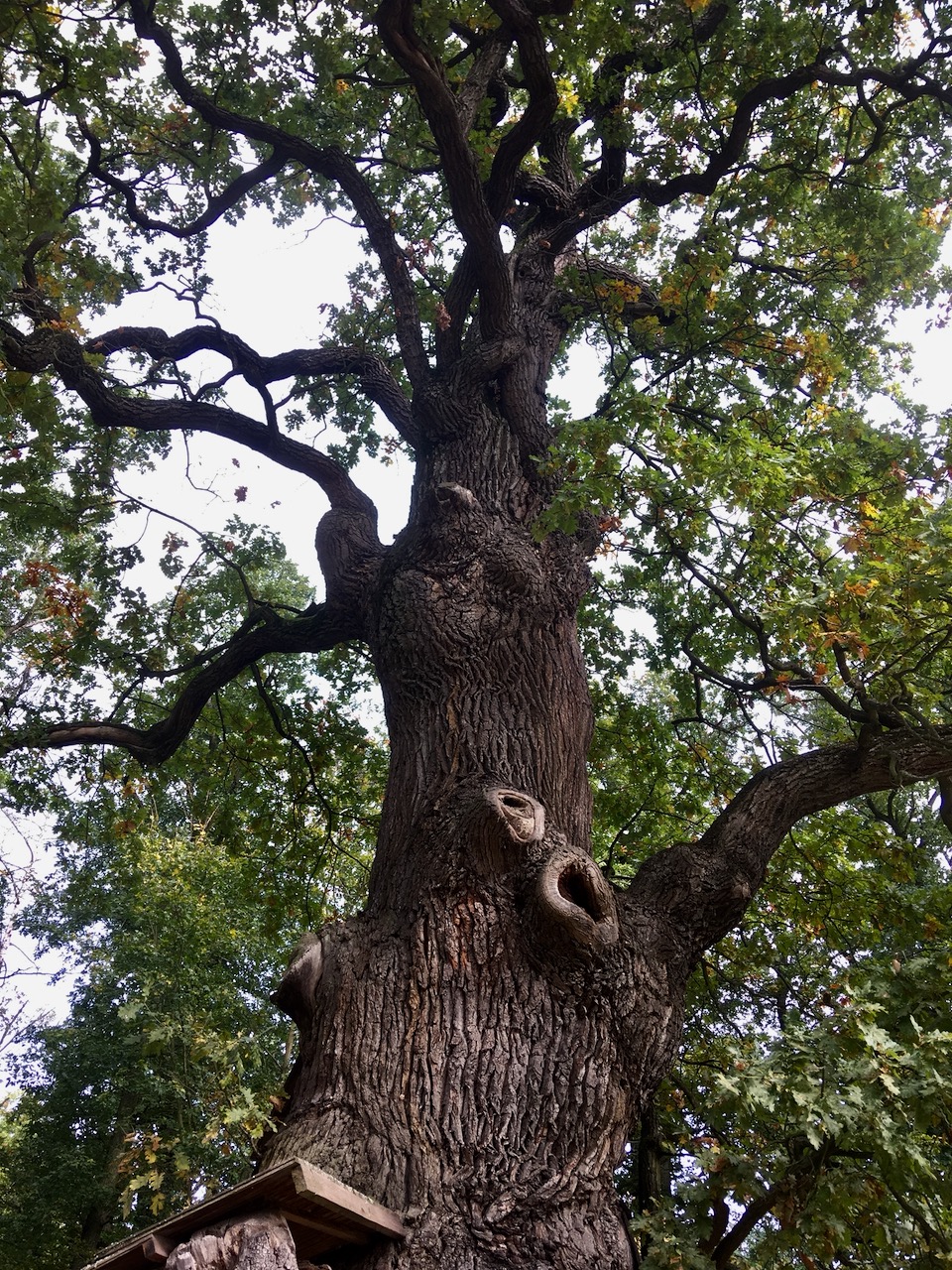 On day two I had a friend to walk with. Justin is younger and fitter, but I did not worry about this. I knew we would both reach our destination together. It was pleasant, except for the awareness of COVID, which meant maintaining at least 2 meters, and at times donning our masks. Nevertheless, it was nice to walk with someone who had done this sort of thing before. Justin had walked the Santiago de Compostela path, 700Km in 28 days. Now, here we were on another leg of this same network of paths,  Svatojakubské Cesta (the Way of St. James). 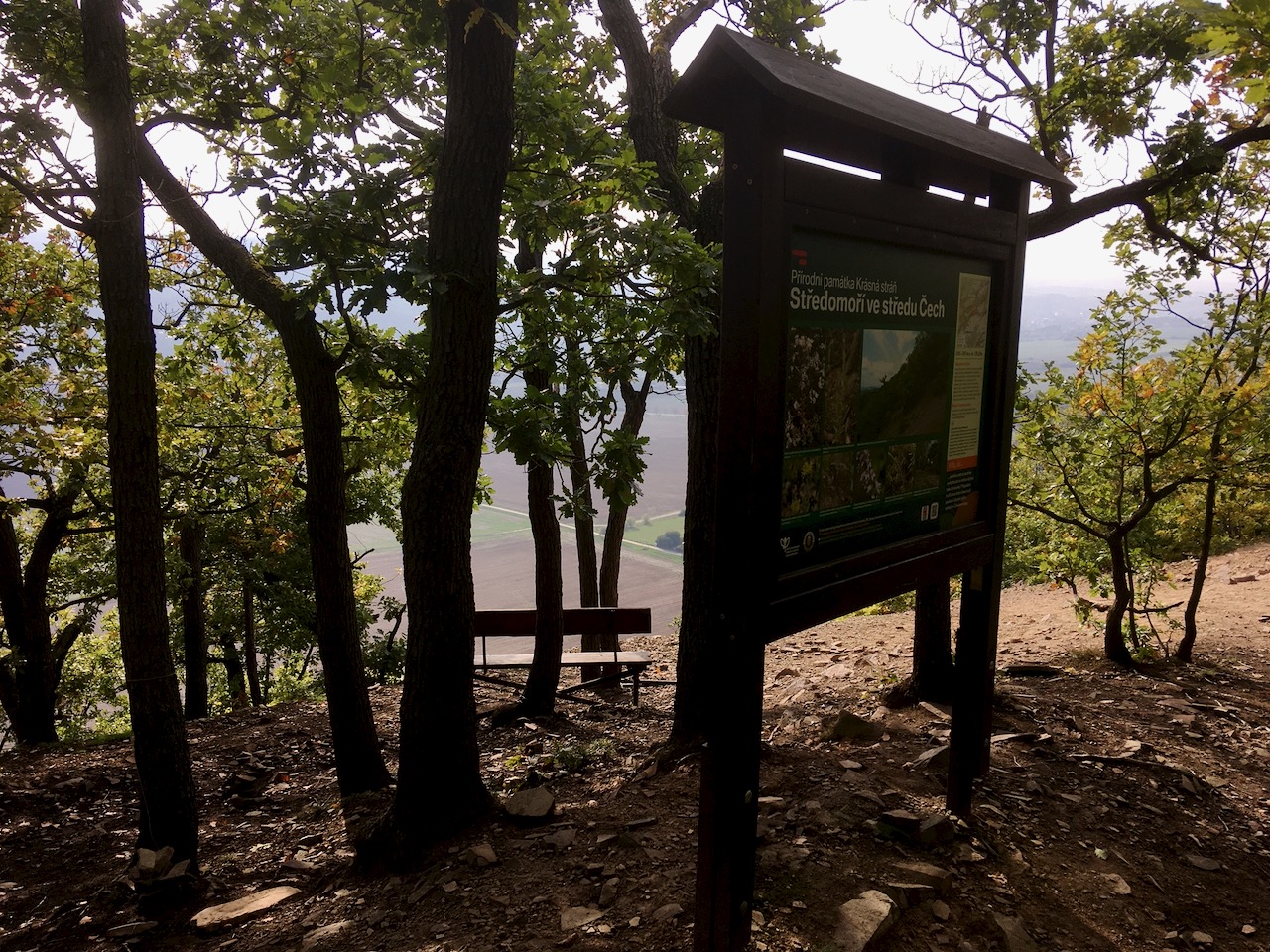 Arriving by train to Černošice, then making a gradual ascent on the blue trail, up to a grand old oak which stood at the fork in our path. Beside the oak there is a stone table, like an altar. The seem to have been here forever, as this place was magic. I sat for a bit while Otik chased in and out of the surrounding brush, chasing after a stick, and Justin pondered the possibility of climbing the oak. Certainly, there were sufficient hand holds on the deep wrinkles on this proud oak’s trunk. 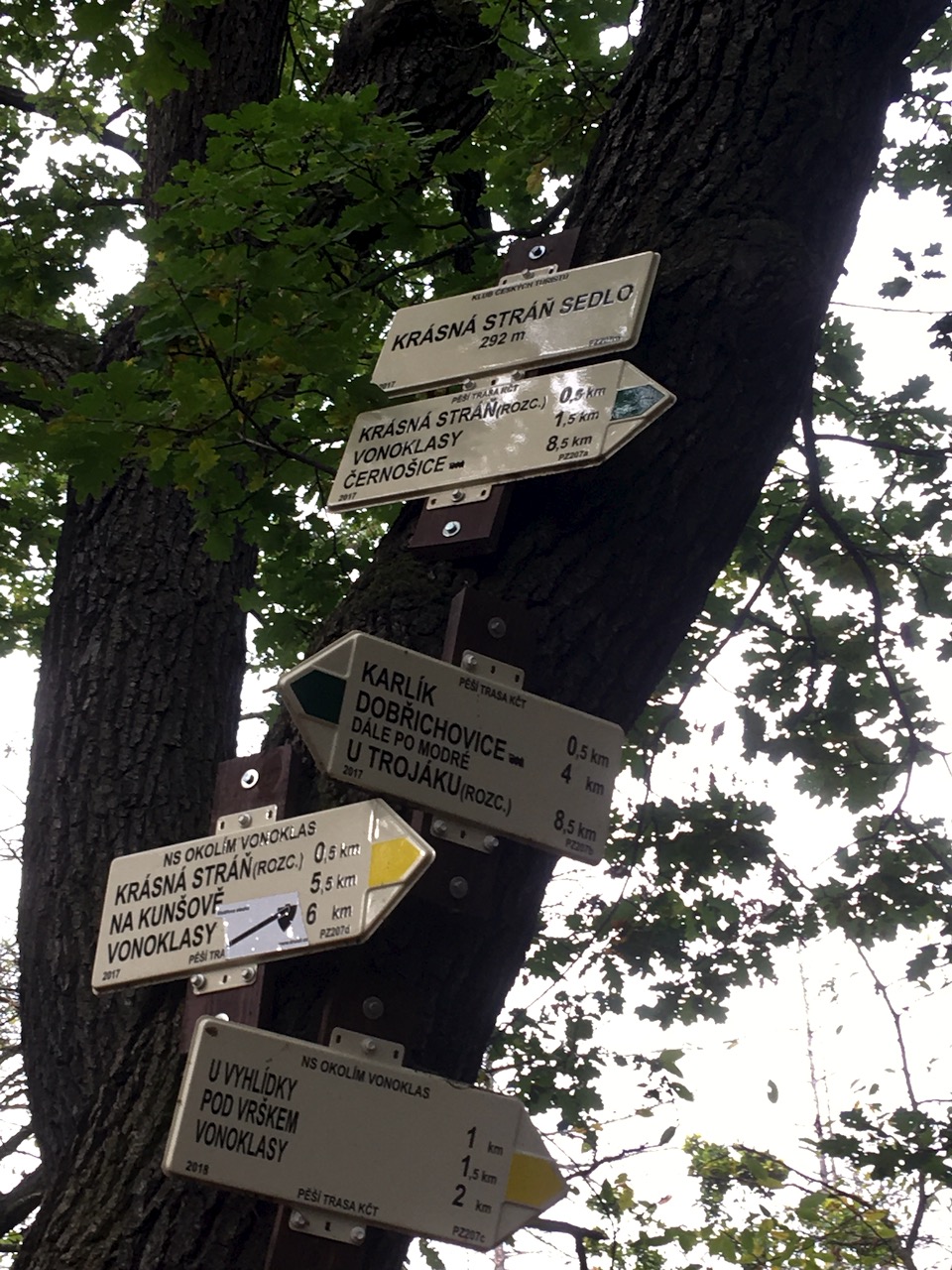 Our choice, at this point, was whether to follow the trail to a scenic viewpoint, or stay the course that suggested by an internet map program. We chose the scenic route, hands down, despite any extra steps it cost us. This led us to a ridge where small (young) oaks glowed nicely golden in the sunlight, and the view, though hazy, gave us both cause to breathe in deeply the expanded horizon. The terrain was gentle both up and down this well-worn path.

It’s important to define here what the pilgrimage trails are, and how they differ from other trails. Today, many pilgrimage routes cross the Czech Republic. Three of these are known as Svatojakubské Cesta. They are identified on signposts by the symbol of yellow seashell on a blue field. While it may be romantic to believe these paths date back to the 9th century, it is not likely, though some parts of the paths are indeed old, as we know from carved granite way markers and ancient trees that line the route. 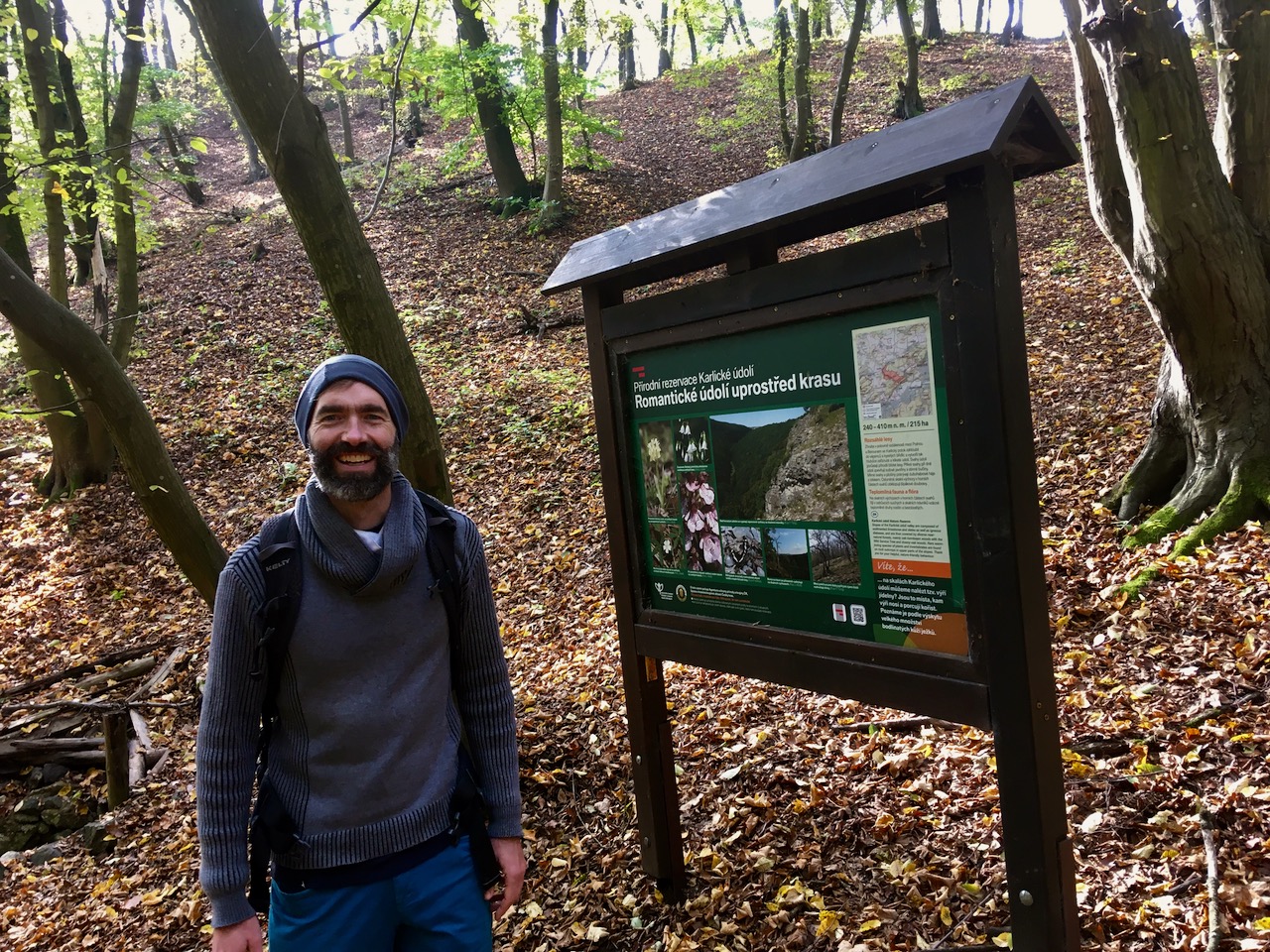 The origins of hiking trails in the Czech Lands is more recent, as the Czech Tourist Clubs, who mark and maintain trails, were founded only in the 19th century, during the revival of Czech history and national awareness. Trails that were marked at this time presumably followed old established paths, but during the former regime they used four different colors to mark the way. Today we can find the names of towns, regions or local heroes (poets, naturalists, etc.) given to different trail. The Way of St. James returned only after the Czech Republic’s entry into the EU. In this respect, this pilgrimage trail is symbolic of interconnected Europe. 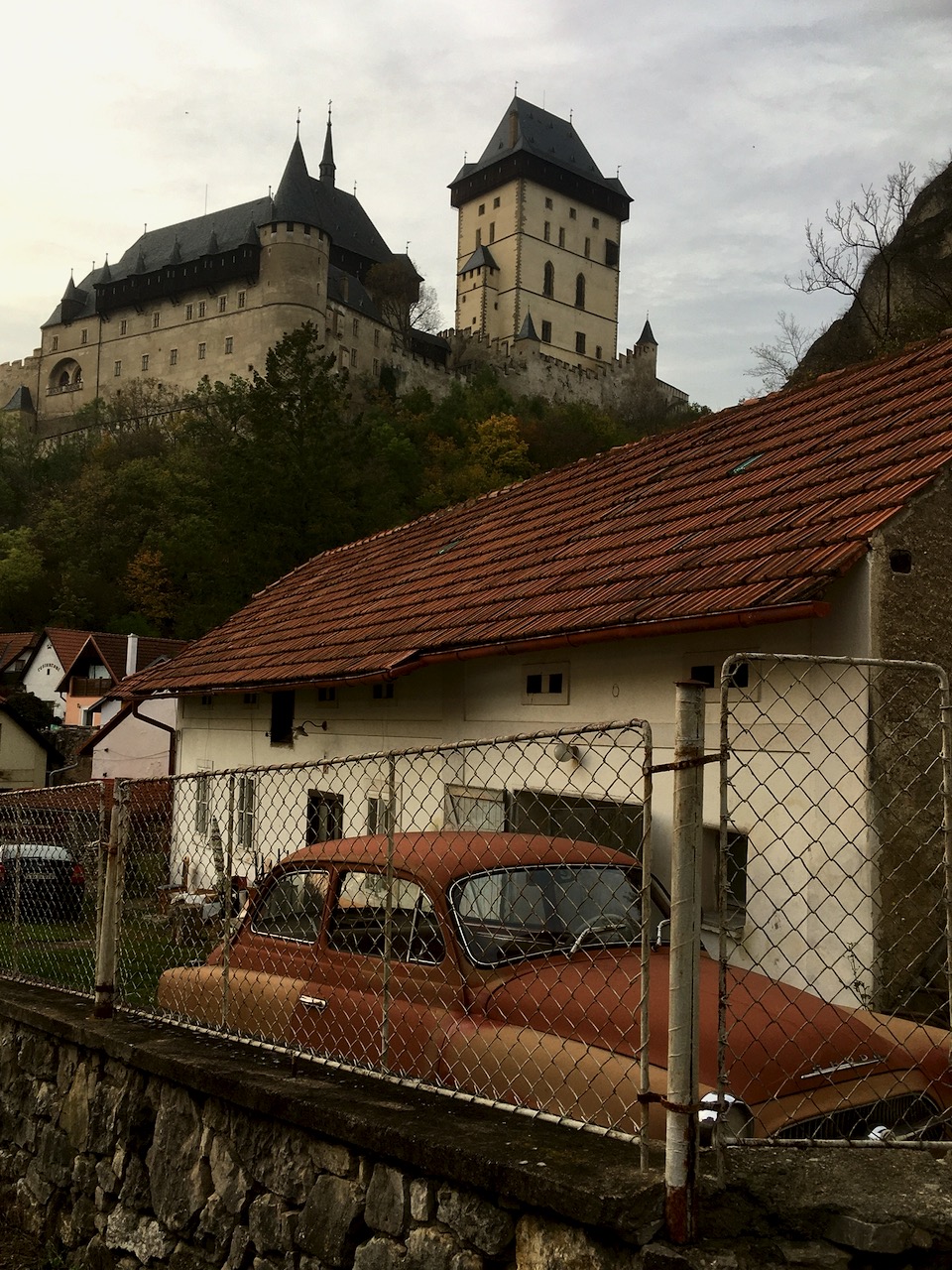 This is where we found ourselves, two Americans following a path that took us to a castle built in the middle of the 14th century. We wondered how old the path was, and how many others had walked this way before us. We saw few other people, but then it was a weekday. The relative emptiness of the path led us to long stretches of thoughtful quiet. At other times we spoke of our families and relations. In today’s world of isolation, it was a pleasant change. A time of togetherness and shared experience. The moment of surprise, and a moment I will not soon forget, was arriving to a street below Karlštejn Castle. As many times as I have been here, it has never been as empty. It was a sober reminder of the world that we had left behind for a day.