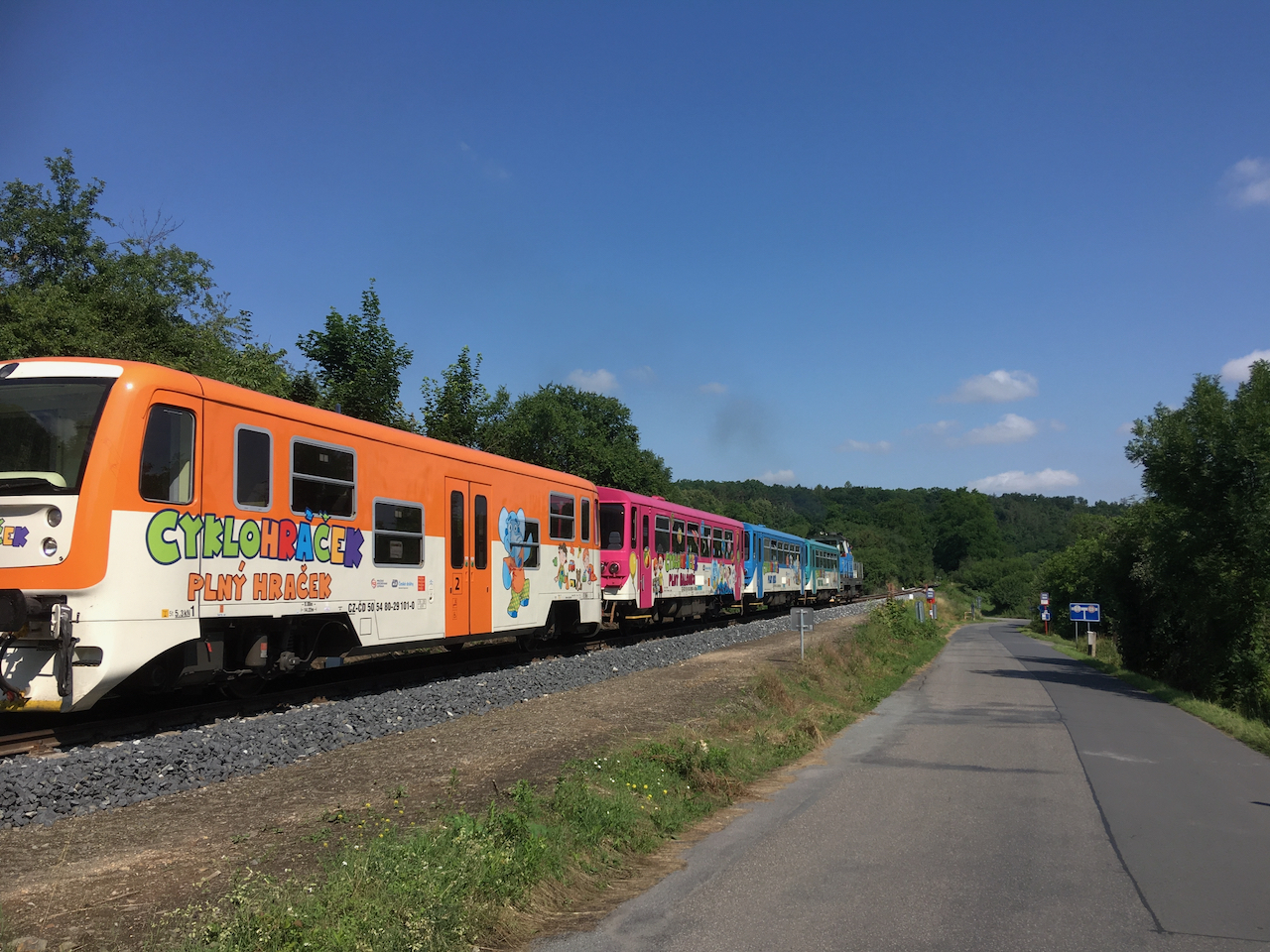 A lot has happened between then and now, but I will try to reconstruct this walk as best I can. The day stands out, as I was accompanied by my favorite walking companions, Marie and Otik. The weather was perfect, with tall clouds like the sails of great ships crossing the sky, throwing shade to cool our way. We set out from Masaryk Station in Prague on the special “Cyklohráček” train. Four colorfully painted wagons, complete with a balloon filled playpen, stations for bikes, and board games on every table. Needless to say it was a slow ride, stopping frequently to let cyclists and families with children on and off. When we arrived at the Kováry station, just below Budeč, we were ready to walk. Especially Otik, who can only contain himself so long. 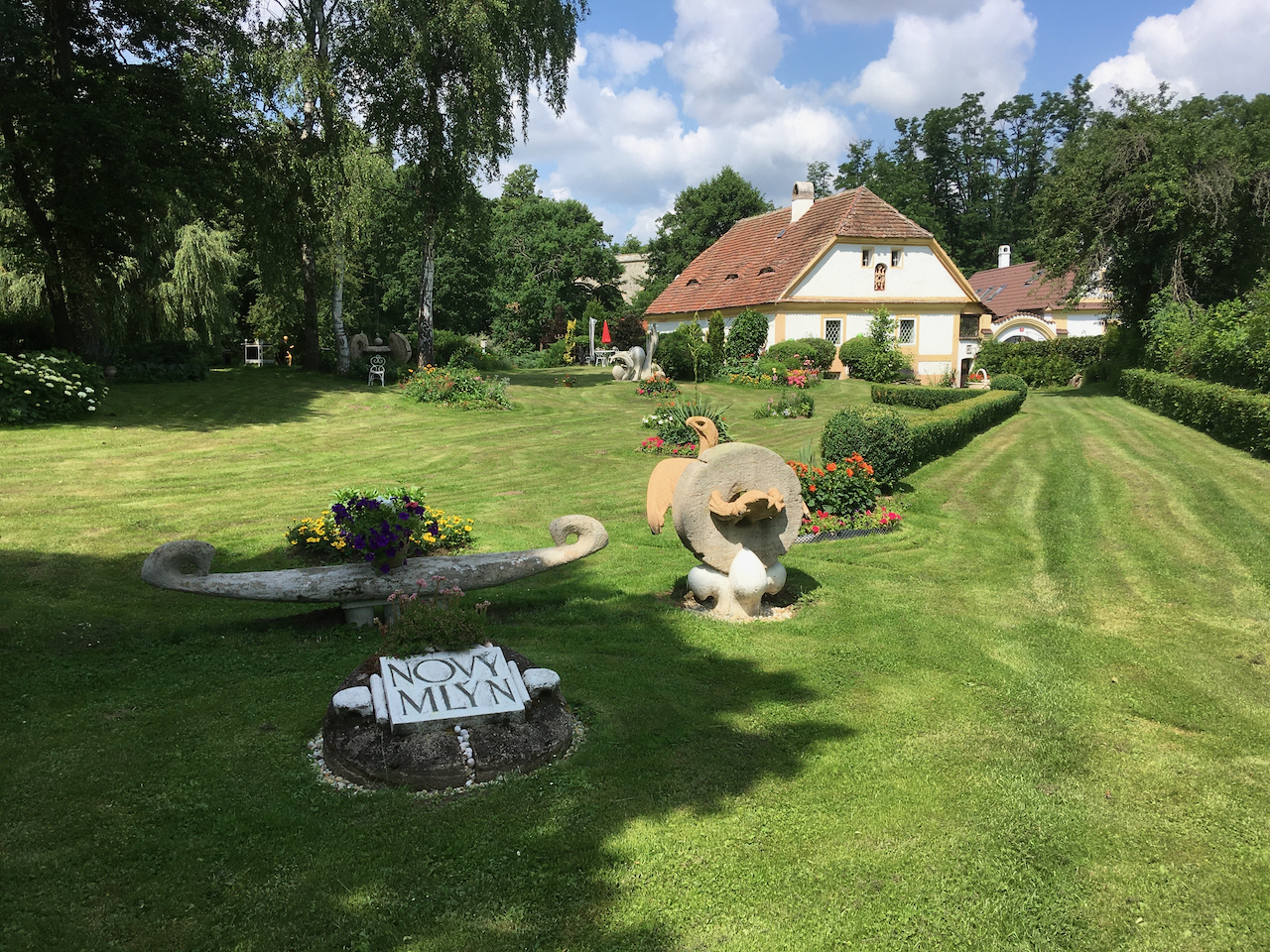 Thus, our 16Km walk began. The temperature by 10am had already reached 80, but the rain from the night before meant the air was fresh, and there was a cool breeze. We followed the red trail markers in the direction of Okoř, crossing fields of barley and rye, past small garden colonies and summer cottages, finding our way along a small creek and below the railway viaduct to Nový Mlýn. This was one of many highlights of our day. The owner was trimming a hedge, that surrounded this rustic baroque farmhouse. What we could see peeking out from behind the hedge, in this pastoral landscape, could easily be considered a glimpse of Czech heaven. The yard was decorated with a number of sculptures in stone, iron and wood, a legacy to the former occupant. 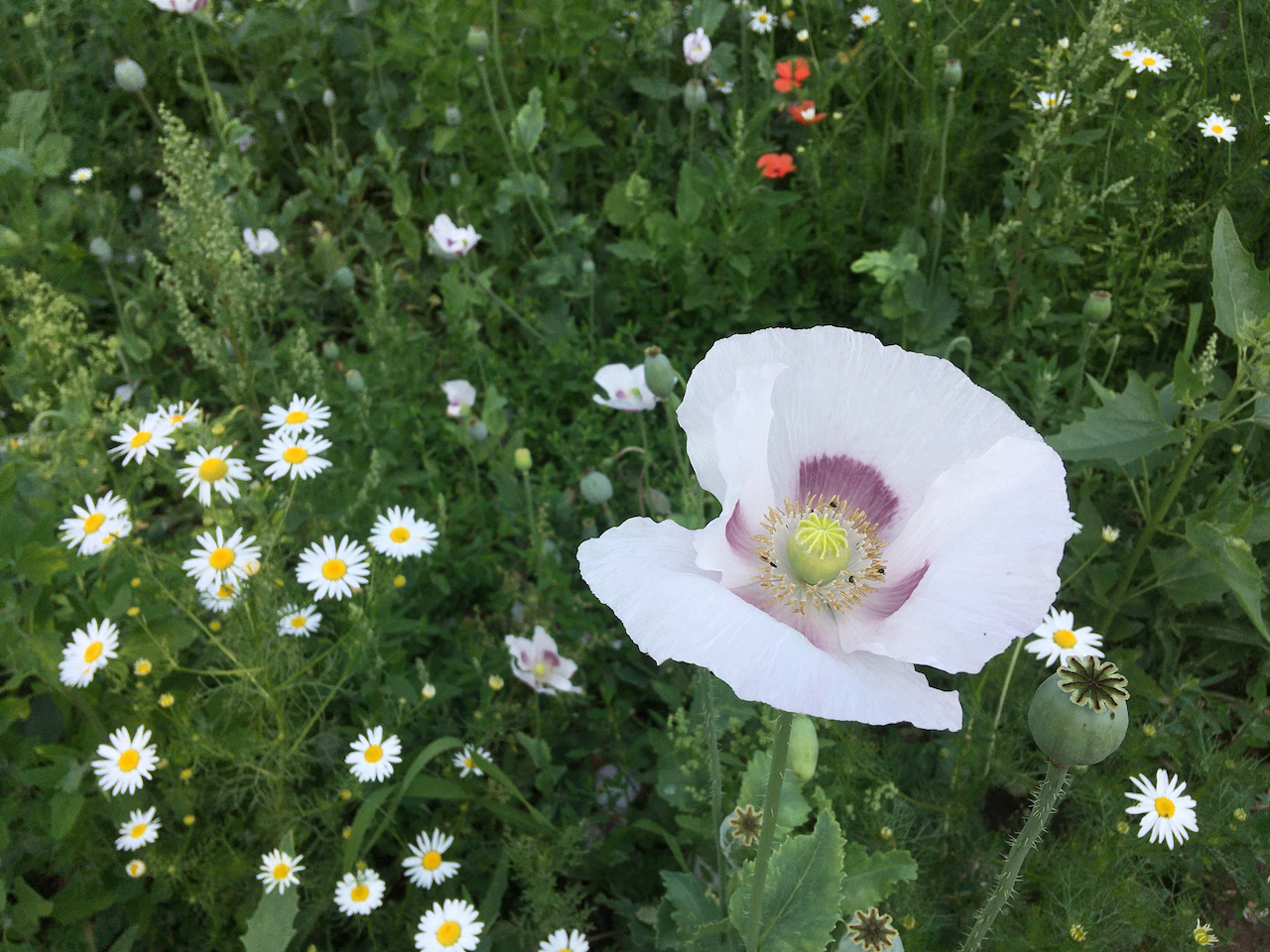 At the bridge crossing a ford in the stream, we left the red hiking path which would have taken us to Okoř, and chose instead to follow a farming road that led us to a vast field of flowering poppies, and sole horse and rider. Marie demonstrated how she use to make poppy dolls from the unopened buds as a child. I recalled the film the Wizard of Oz. It was time for some refreshment, and in Noutonice we found a delightful family owned café and stables where a number of students learned to ride in this peaceful setting. 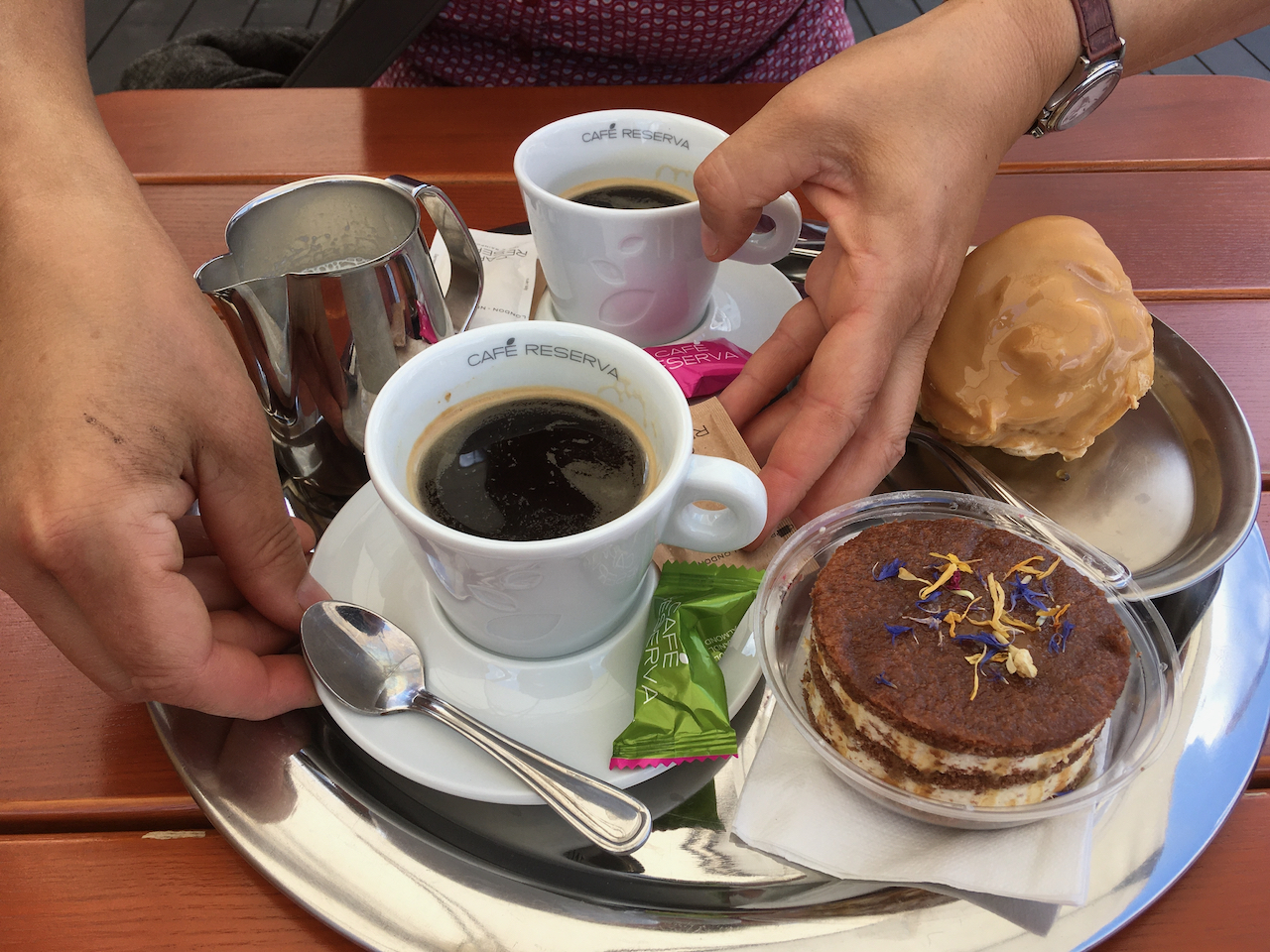 After a quick glimpse of the church and cemetery in Noutonice, we followed an asphalt road, that crossed the large fields, with tracts of new houses cropping up, as if they were part of the terrain. Fortunately, the road did not have much traffic, but it also lacked any shade trees, so we were glad to reach the next two villages. Kamýk and Velké Přílepy appear as a single village, bustling with shops, an increase in cars passing by, but still somehow sleepy on this Sat. afternoon. The attraction here was a detour up to the top of a small rock outcrop where a cross had been erected in the middle ages. Over the years it had been knocked down and re-built many times. It was an easy climb, and a nice place to look out over the horizon that we had walked. From here we could almost make out the hill called Říp in the distance. 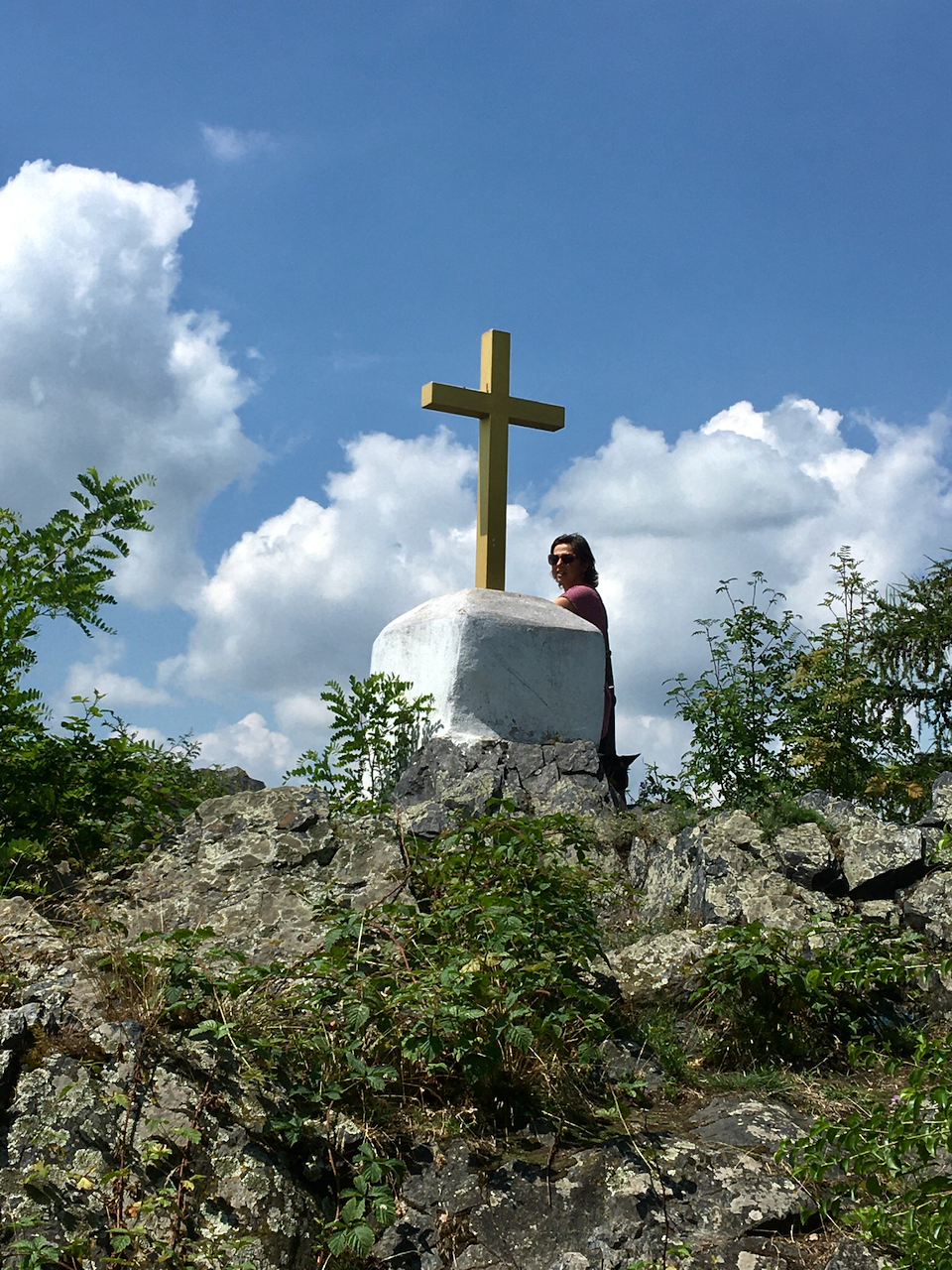 We left the prescribed route, recommended by the Mapy.cz program, and took a more direct route to Uholičky. This was on an unused asphalt road, with new housing on one side, and a green wetland on the other. There was plenty of shade trees, and a playground for dogs. It is just one of those lucky coincidences that I have become accustomed to during these walks. On a wall below the new housing there were a number of copies of some well know paintings, the work of a local art school. There was also graffiti. It reminded me that not everyone shares the same opinion. What is Art? Uholičky, however, is a charming community, with private chateau and public park, a welcoming pub, with great pickled camembert cheese, and a refreshing 10˚ Unětice beer. 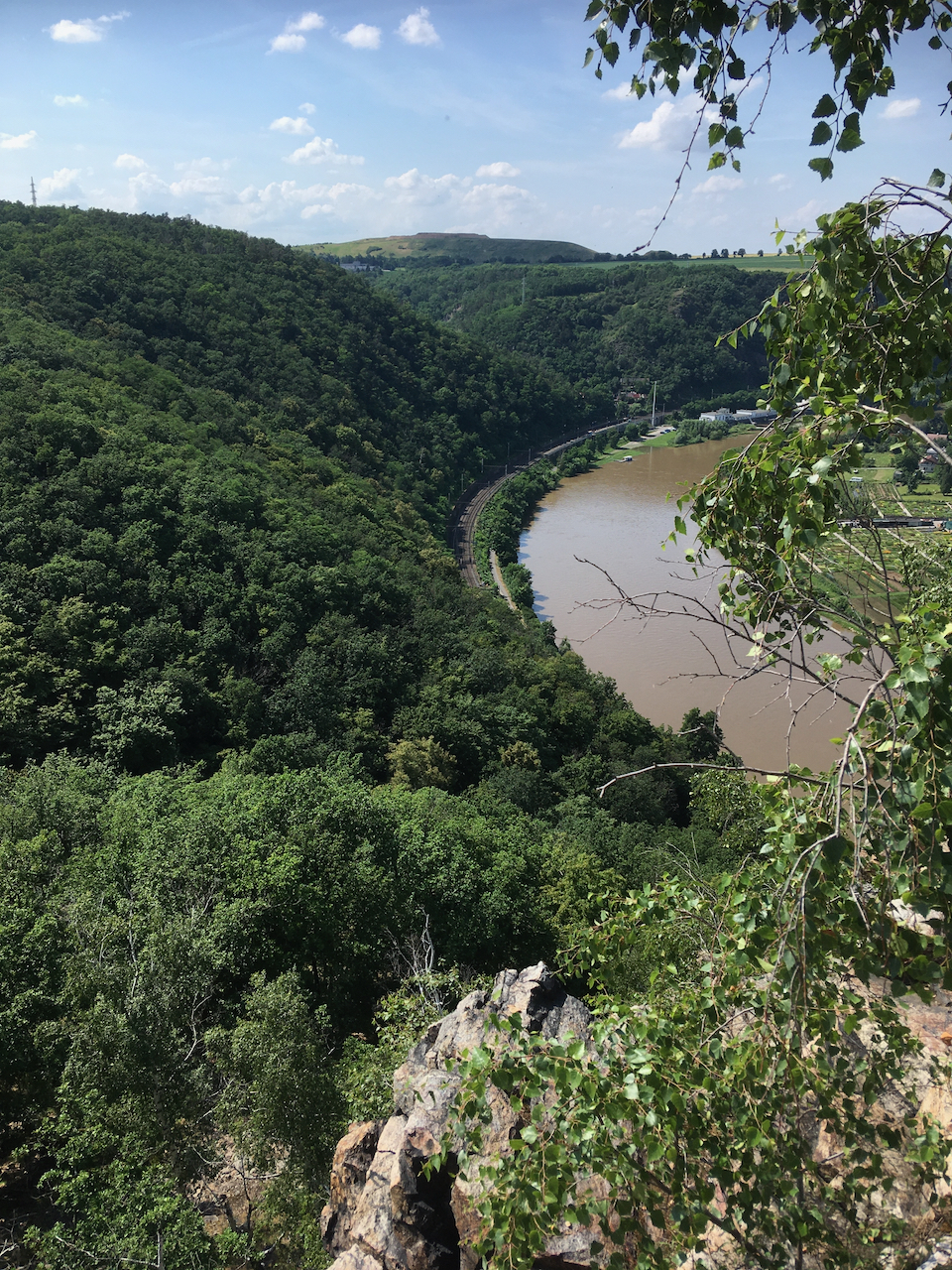 This break, roughly at the 2/3 marker, braced us for the final push to Levý Hradec. The trail before us was a steady climb to the Řivnáč viewpoint, overlooking the Vltava River. By now, the temperature was pushing 90­˚, and our legs were feeling the effects of the beer. We didn’t linger long, but pushed on through the remaining 1.5 Km, which brought us to the familiar neighborhood of Levý Hradec, and the garden of our friends, where a refreshing lemonade was waiting, prepared especially for us. 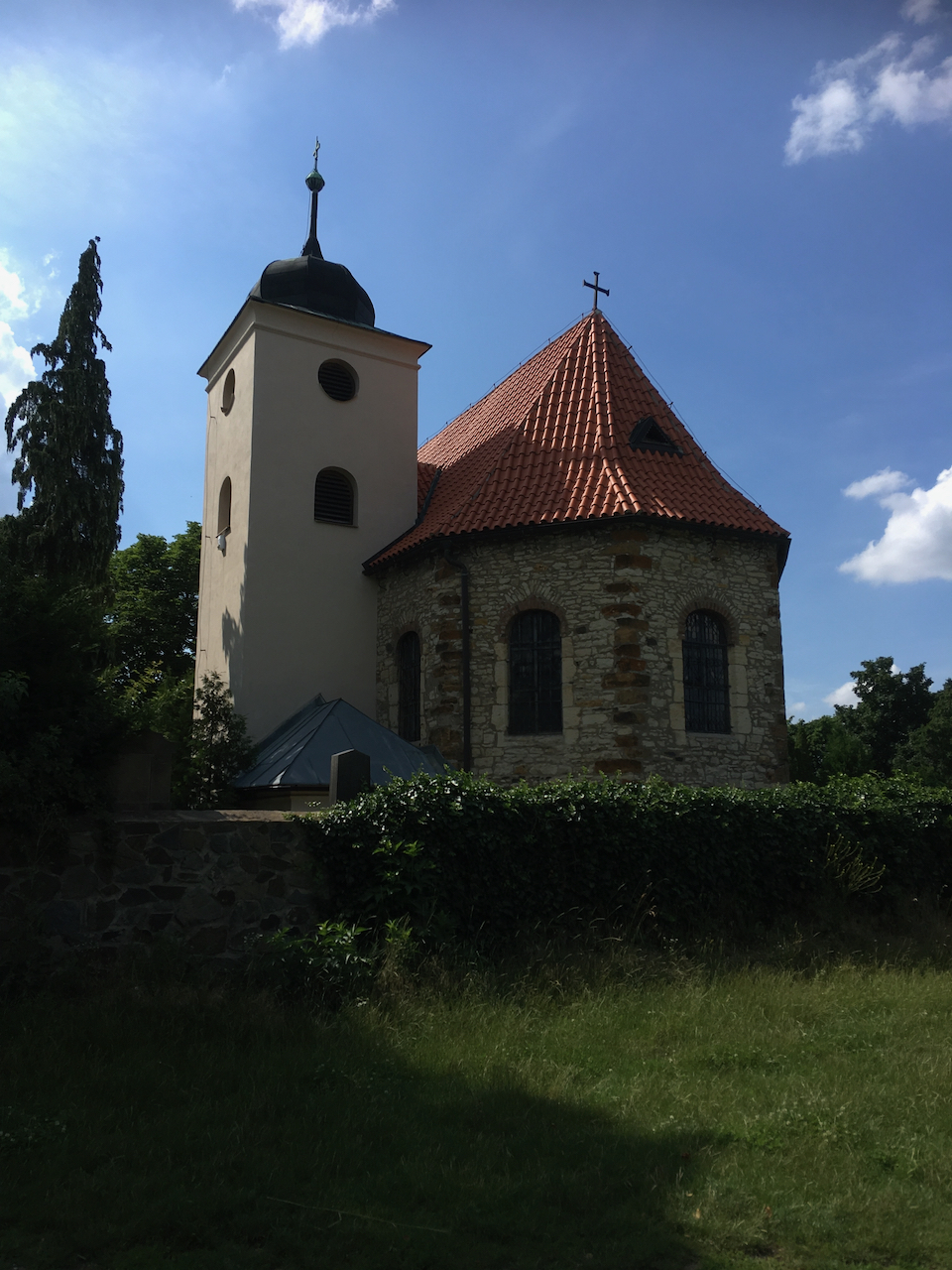 Both Levý Hradec and Budeč are on the path of St. Ludmila, mostly due to their age, as two of the oldest remains from the period when she would have walked this earth. The path which she would have taken on her way to Prague may be difficult to imagine today, considering how much new development there is. But the river, streams, rock formations and the landscape itself surely would all have been familiar. Sitting in the garden at Levý Hradec, refreshed by our friend’s hospitality, we understood just how comforting it is to be so welcomed after a long journey.

This too has not changed…