The Fog at Dawn Lifts, and With it My Spirits… Day 5 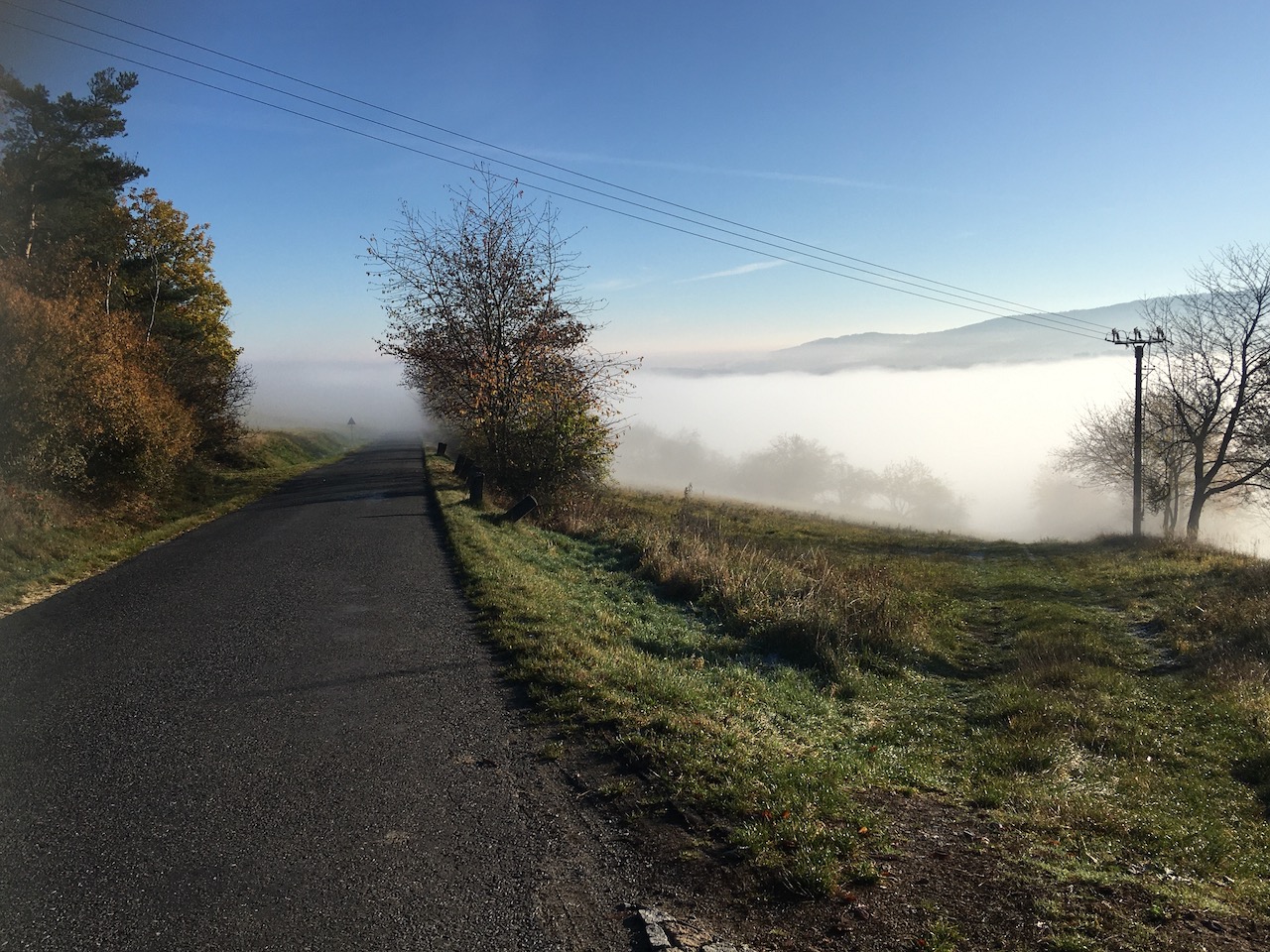 Back on the trail, after a 1week hiatus. Set out early, after a night of freezing temperatures. Marie dropped Otik and I at the same place where she had picked us up a week ago. We spent the night before at our chaloupka in the village of Branov, near Křivoklát. It was comfortable in the old cottage, warmed by a wood stove and thick eiderdowns, it was difficult to set out. We were rewarded, though, when the sun broke through, above the fog that covered the entire landscape below. 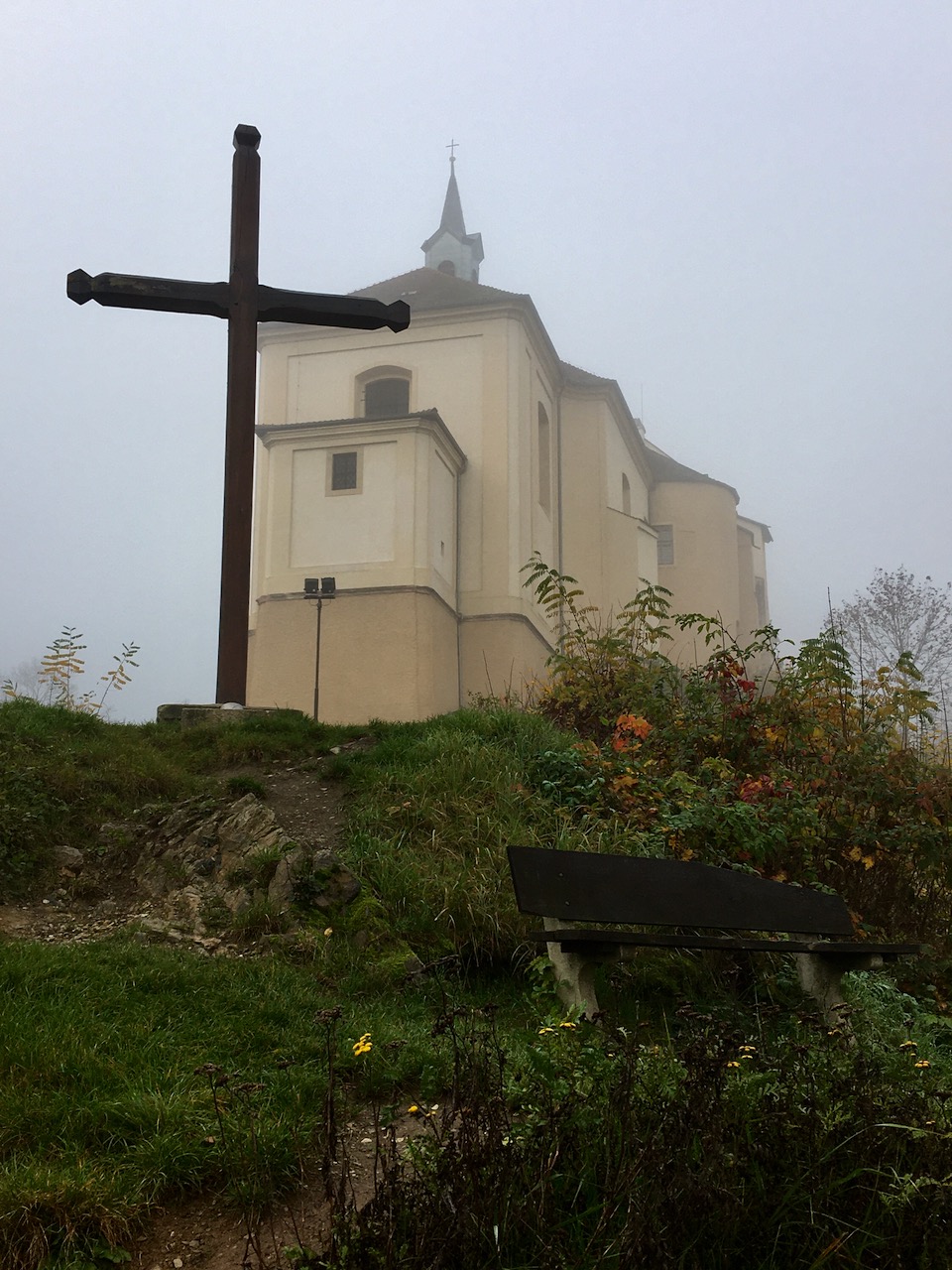 Descending into this cloud, the temperature dropped 4º to -2º C (28­º F). I worried that I had not dressed warm enough. The forecast temperature was 10º C (about 50º F). Nothing was to be done, but to drive on into the fog. Without an extra layer, we would just need to keep moving to stay warm.

As I left the car, with Otik, my companion for this day. We could barely see 10 meters. We began by climbing up a steep slope to the Castle above Nižbor, where the fog was already lifting. This helped lift my spirits. At least I would be able to find the trail markers. As long as we kept moving, it did not feel cold. Without gloves, though, the cold on my hands was just about bearable. Before us was 15.5 Km of the St. James’ trail to Roztoky.

Unlike trails from previous days, this one mostly followed roads that were used by logging vehicles and local cottagers. Some roads led us away from the colonies of cottages, and the sound of cutting wood. Only twice we found our way onto quiet foot paths that afforded a view of the river below. Most of the day was spent on dirt, gravel, or asphalt lanes. 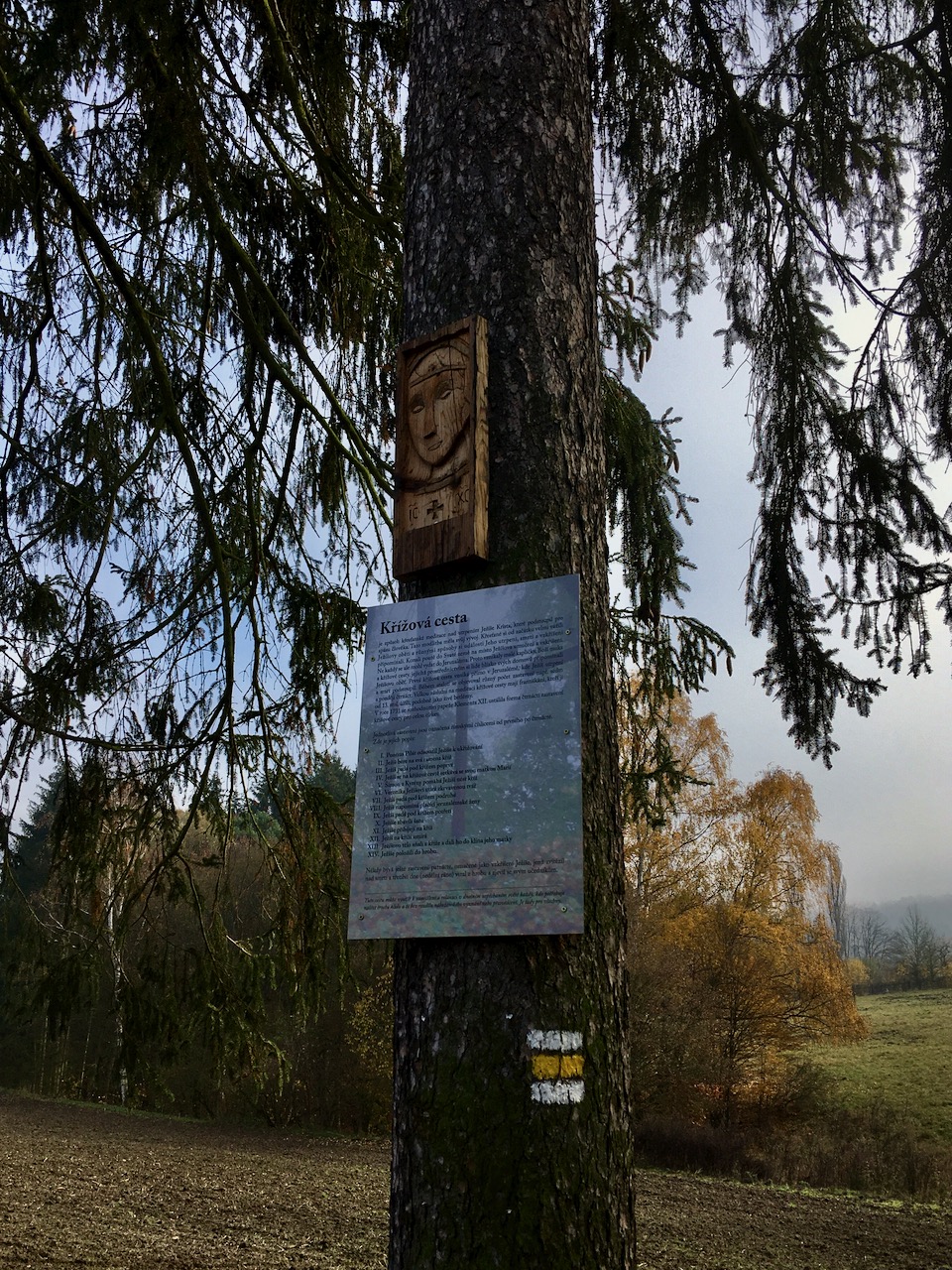 One noteworthy moment was at a crossroads, where the red and yellow trails intersected near the village of Račice. This was beyond the half way point, and I was feeling very tired. It was time to rest, and take refreshment at a table beside a tree. The yellow trail marker was painted on the tree, and above this a wooden sculpted face of a monk smiled knowingly down on me. Also, a placard listing 15 stations of the cross (Křižova cesta), reminding me to pray. Despite nagging distractions, here I was at peace. I found the strength to continue my journey. 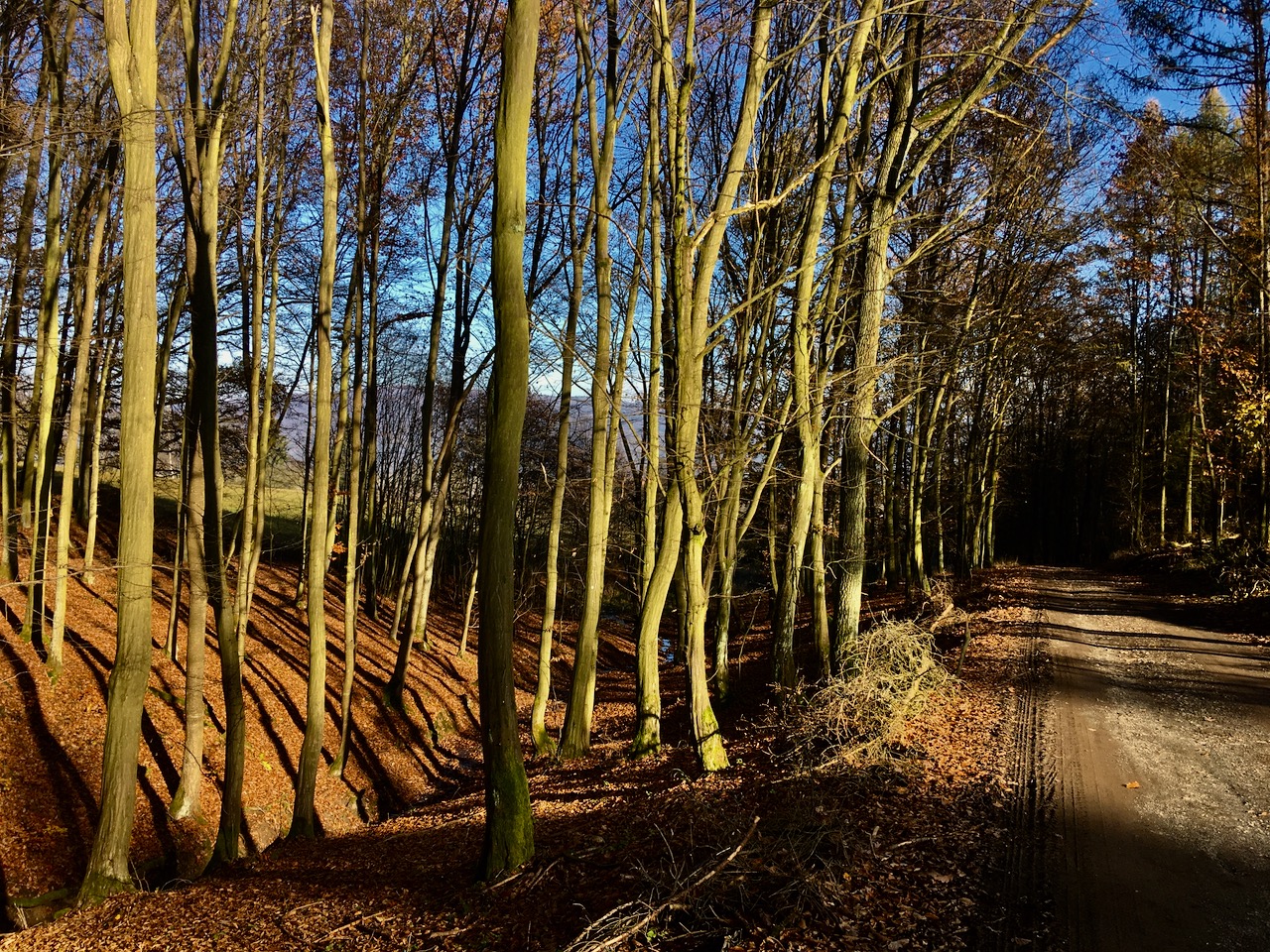 The next 4 Km was one long climb on a narrow road that cut straight through the forest. There were no views of the river, or broad vistas, but many signs of development, new houses, power lines, and the sporadic traffic of logging trucks and cars. It was a distraction from my prayers, and it caused a greater level of fatigue. I had to keep moving to overcome this. The road seemed to climb forever up, gradually but unending. 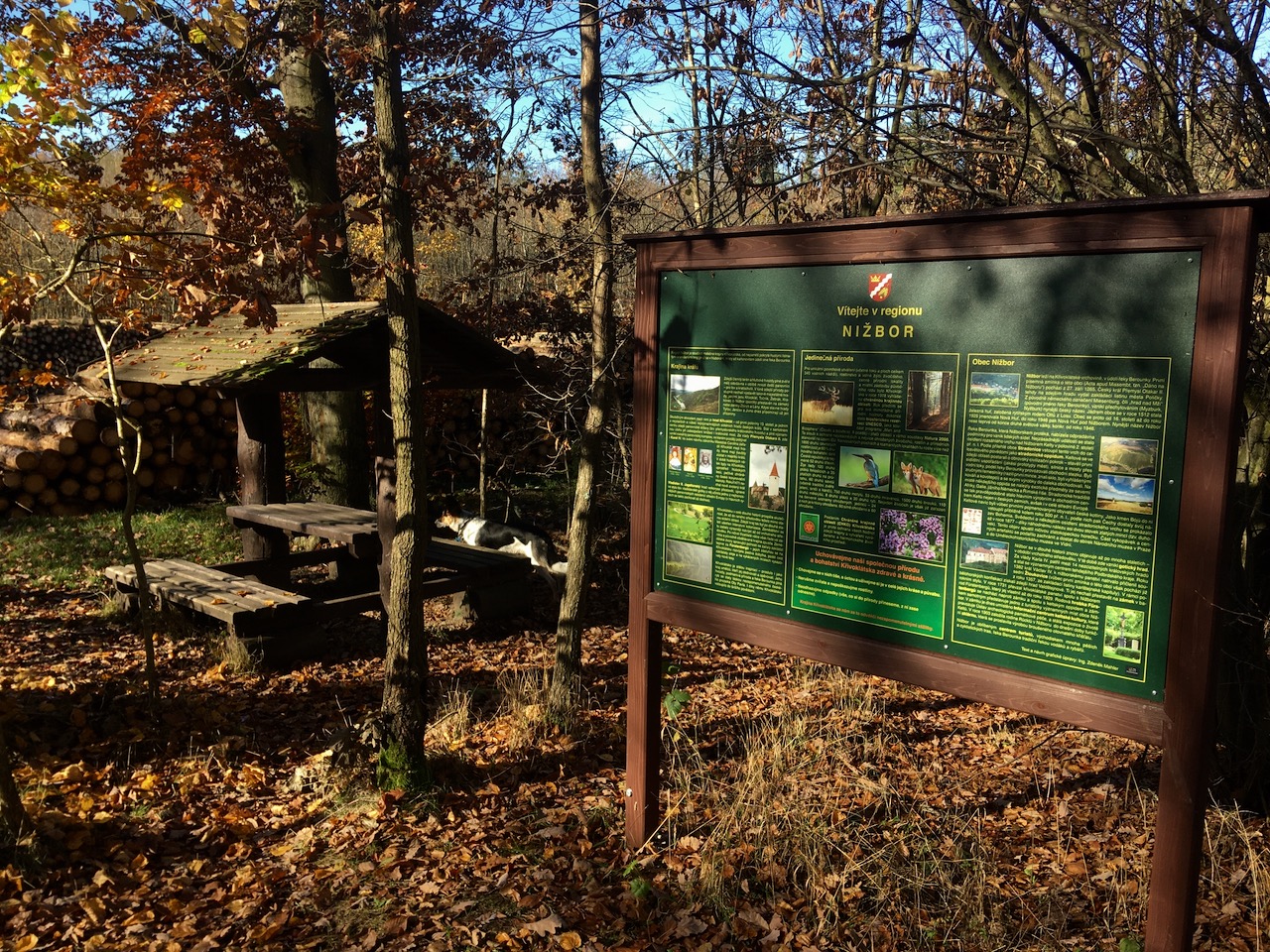 Finally, I came to a curve, and not long after the road leveled. I could now hear the sound of many vehicles, passing quickly, and I knew that I was near the main road. I crossed this road, and followed the trail to a sun-bathed meadow. It was a killing field, with stands on either side of the meadow. In the center there were buckets that hunters filled with bait to lure the dear, and I wondered if the wild boar also took this bait. The leaves on the ground here were covered in frost. Under the canopy of trees, it rained large wet drops, as the frost on those leaves still hanging began to melt. 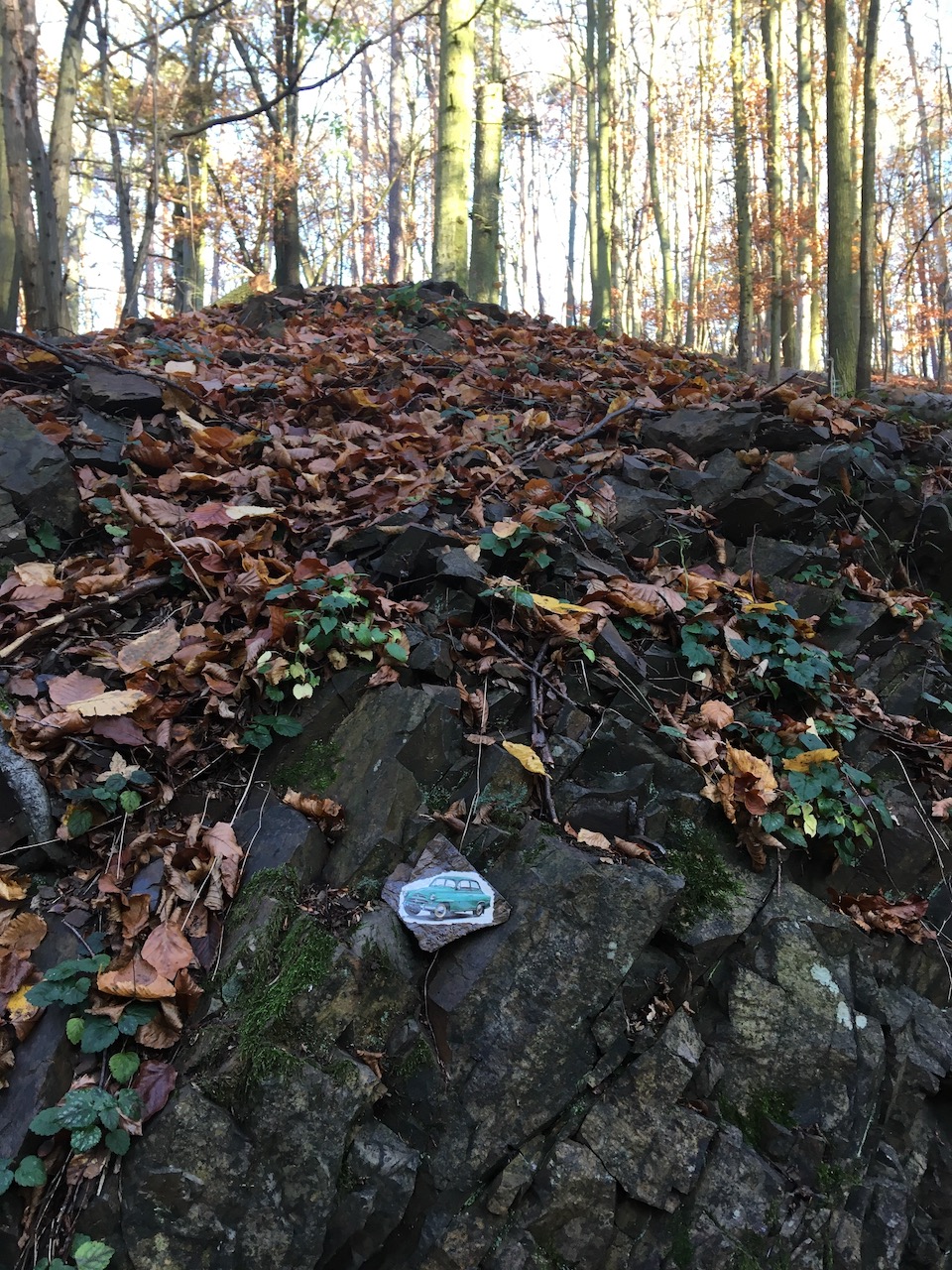 The highest point in my walk today (445 m) was pod Beraníkem, just below the hilltop Beraník. It was lit like a torch in the Autumn colors, brightly shining in the midday sun. I was warm and feeling quite content, knowing that the remainder of the walk would be a descent down to the river. Again, the yellow and red paths crossed. I continued to follow the red markers as they guided my descent.

Ironically, this was the most treacherous part of my day’s journey. The path was steep, on a moist, leaf covered, trail. It was impossible to know where to step, as the stones, hidden below the leaves, were loose and uneven. The way here was slow. It demanded my full attention. Meanwhile, my four-legged companion could not contain his excitement. He had caught the scent of a deer, and bolted into the brush. It had not been possible to leash him, so I let him go. He returned a moment later, no match for the dear on this terrain. 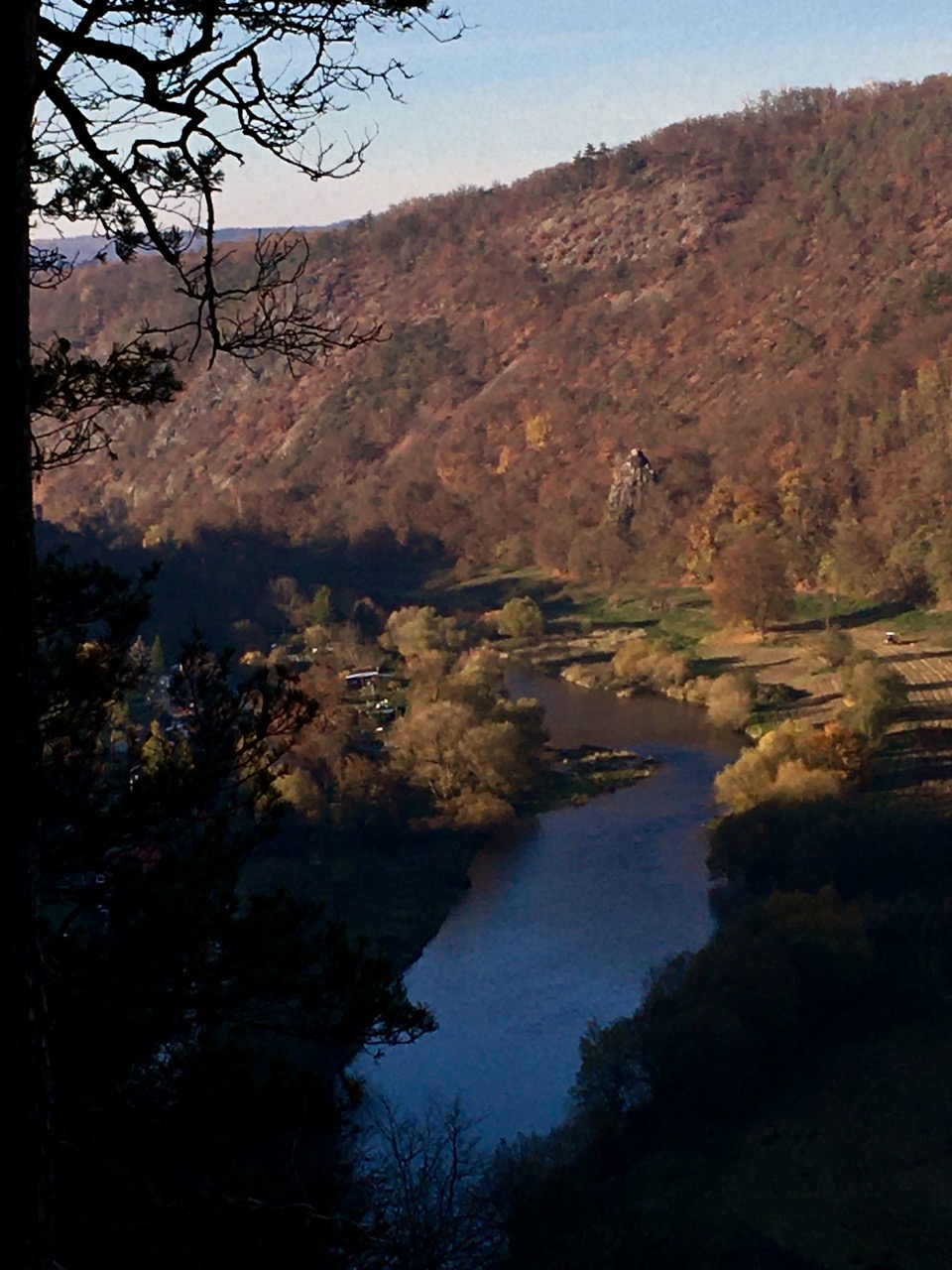 We finally reached the second, and last viewpoint for the day. Here I tried to fly my drone to capture a view of the river, which was now awash in the clear golden light of this waning Fall day. My efforts did not succeed, however, as the battery on my phone was too low, and I feared losing control of the drone in this difficult terrain. Besides it was an unwelcome distraction from the beauty of the moment. Just 1.5 Km and I would reach my destination. The bridge crossing the Berounka River in Roztoky, where Marie arrived within moments of my arrival.

Another day, and one more leg of my journey completed. It’s starting to make sense that this is how I will come to know Czech, by following her rivers one by one. As I proceed, my mind clears from the worries and distractions. My heart is beating stronger. It is warming me, this chance to explore the forested valleys on foot, and to find peace in my soul. I am beginning to believe that no destination is too far. Perhaps this is how my ancestors felt…