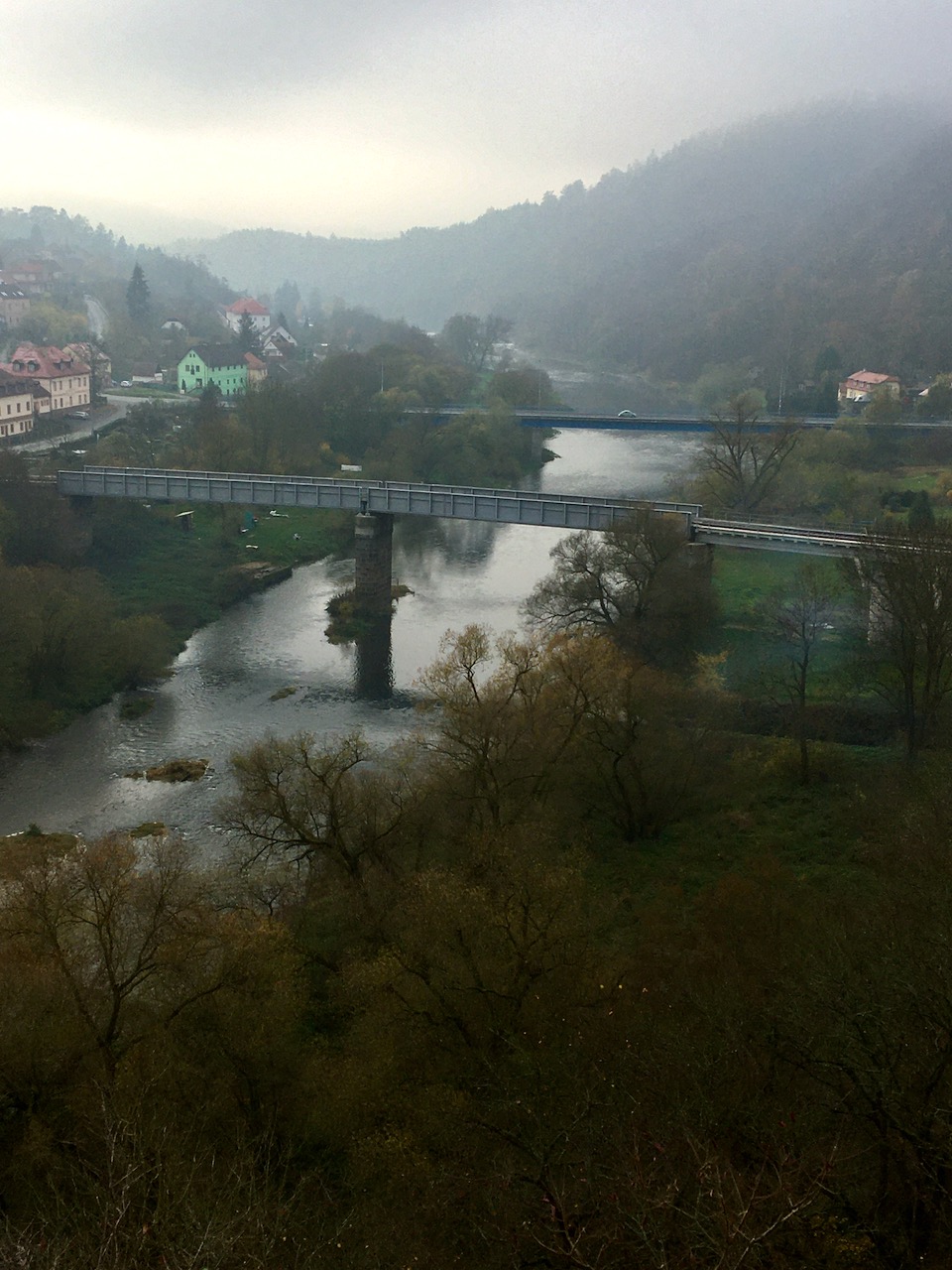 A short walk with Marie and Vincent on the first day. We visited a viewpoint, overlooking Roztoky and the Berounka River below. The bridge became a theme for the week that would pass before I could continue my journey again. Further along there was a view of Castle Křivoklát. I watched it peek out from a rich fog, like a great ship in the sun, floating on a sea of cloud. The pictures I captured on my phone do not come close to portraying the magic of the moment. 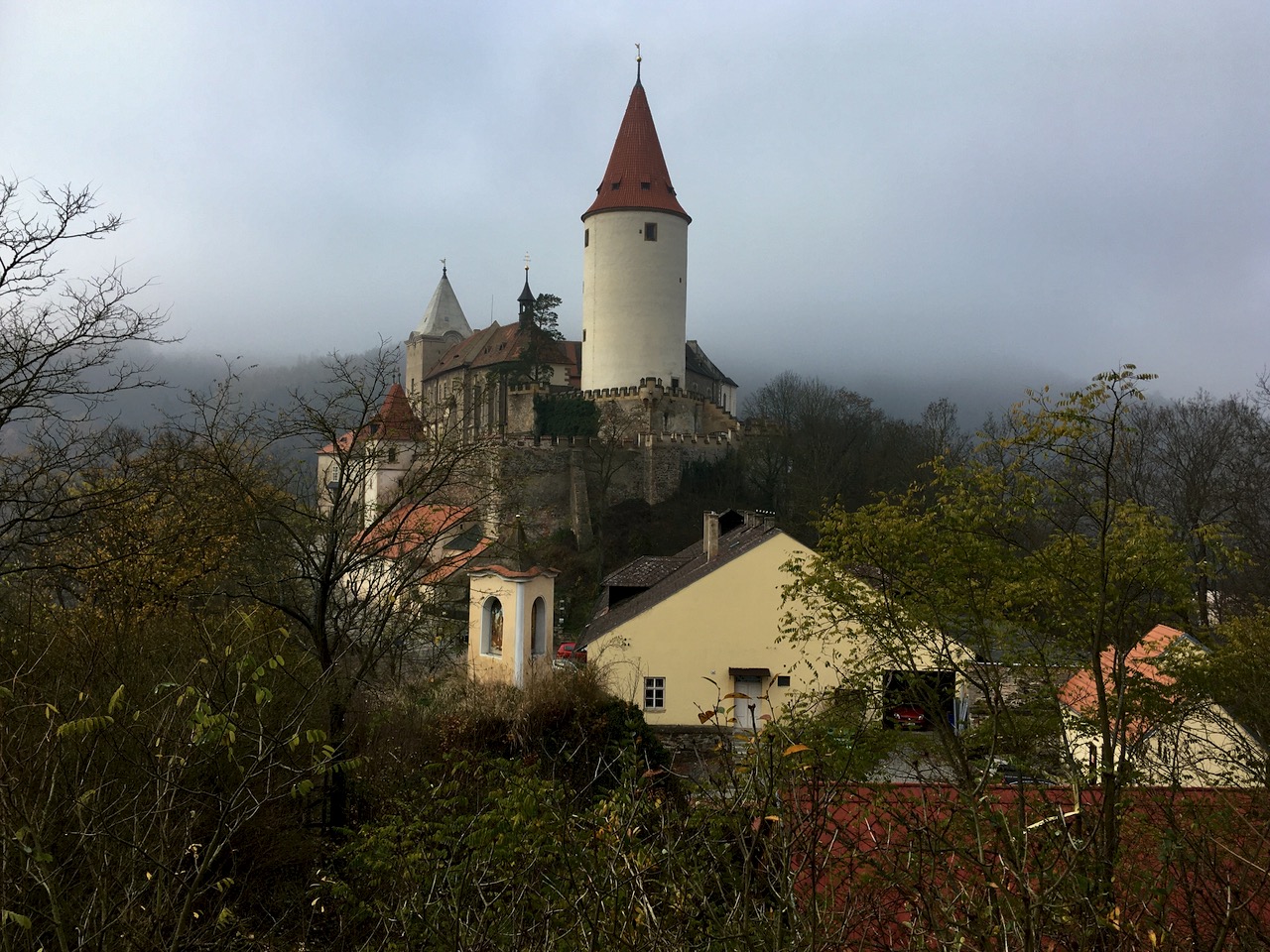 And so, my thoughts wandered, from here to where? The next leg of my journey, from the bridge below to the next bridge across the Berounka, further upstream in Skryje. This would take me past the remains of Castle Týřov, once as grand as Křivoklát. Looking up from the river below the ruins of Týřov castle, I tried to imagine this. But 600 years had taken its toll, and left little for my thoughts to build on. 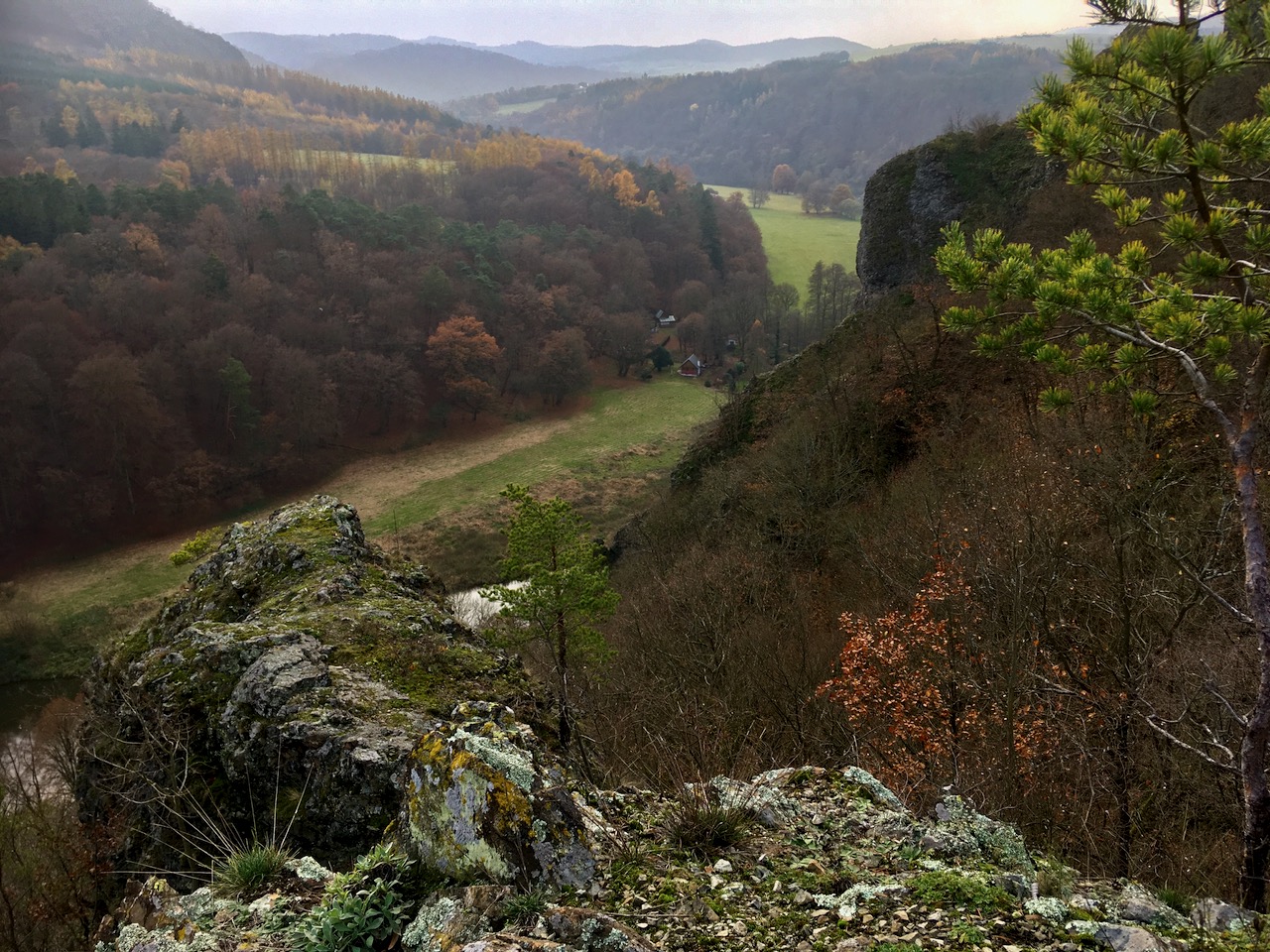 The trail passed high above the river, upon ancient rock formations, the stone walls that this river valley flows between. On a map of old Bohemia, the meandering river valleys appear like signatures of some forgotten script. Time placed these castles here, villages and solitary farms there, along their banks. The Berounka stands out, as this is where the Dukes of the Premyslid line built their mighty strongholds. 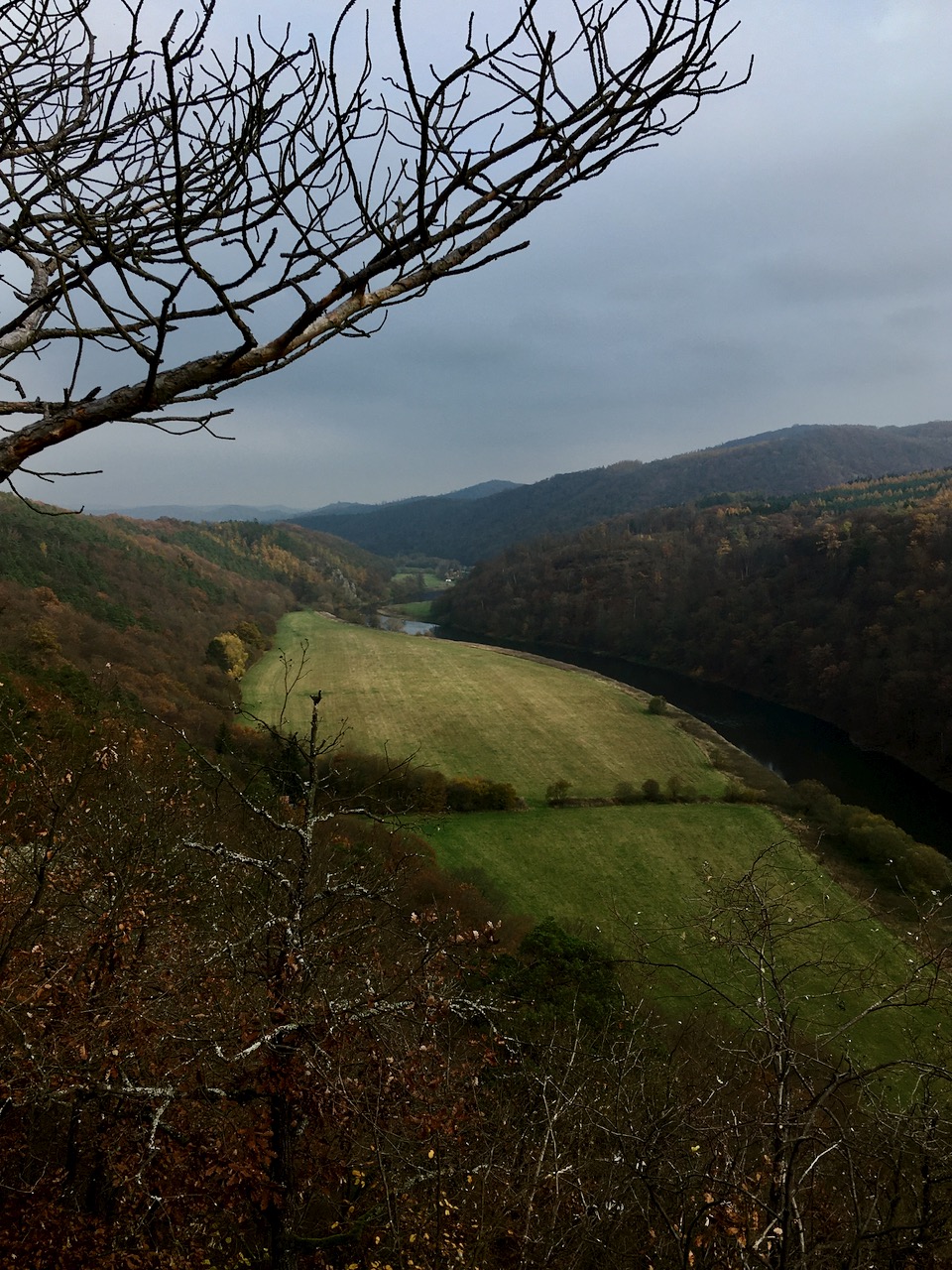 Starting with the foundation of Křivoklát Castle, as long ago as the 12th century. It occupied a forested terrain, host to organized settlement back to the time of Kelts, more than 1,000 years before the birth of Christ. This valley, full of magic, which the earliest inhabitants knew well, and later rulers sought to understand. It was the middle age building upon the ancient map of the past.

Týřov Castle was even older. It was built on Palaeolithic rock formations 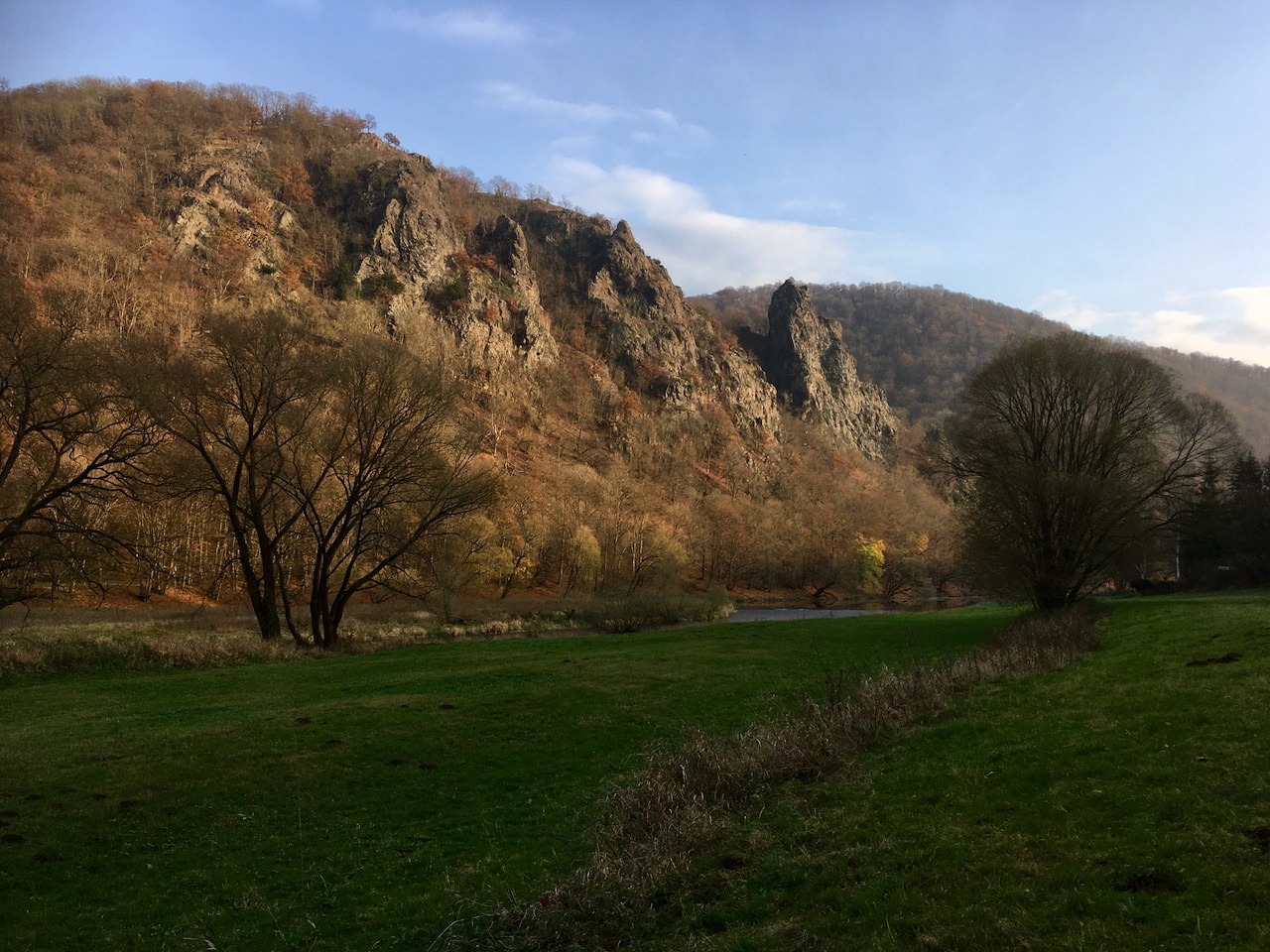 that provide its foundation and stone walls. It stood the test of time for more than 400 years. It’s demise informs us of the significant events of that time. This is the source of many romantic tales. Of course, they all feature the river, the steep cliffs, and the fertile green banks. Týřov Castle once stood guard over a ford in the river. Those who crossed here did so by the grace of the Lord of Týřov. 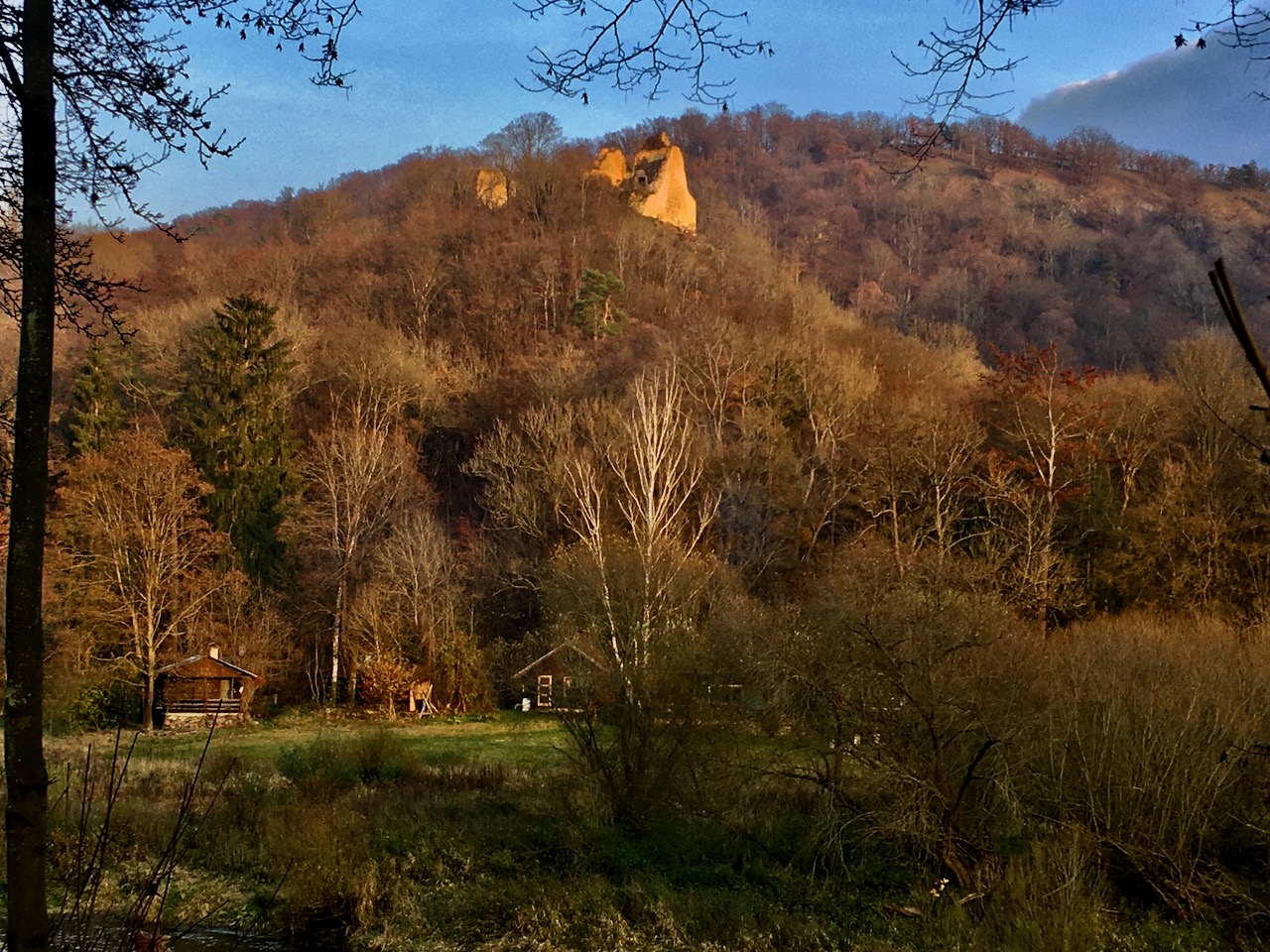 On my way, Nov. 13, the birthday of our first daughter, Antonie. I traveled with her on my mind. A lone bench, afforded me splendid view, our beloved Branov from yet another side.   It was the perfect spot to reflect. The moment I first was aware that someone in this world relied on me. I knew that the path I walked today didn’t begin two weeks ago. It began 26 years ago, when I became a father. It was just a blink of the eye, as I looked out over this landscape. 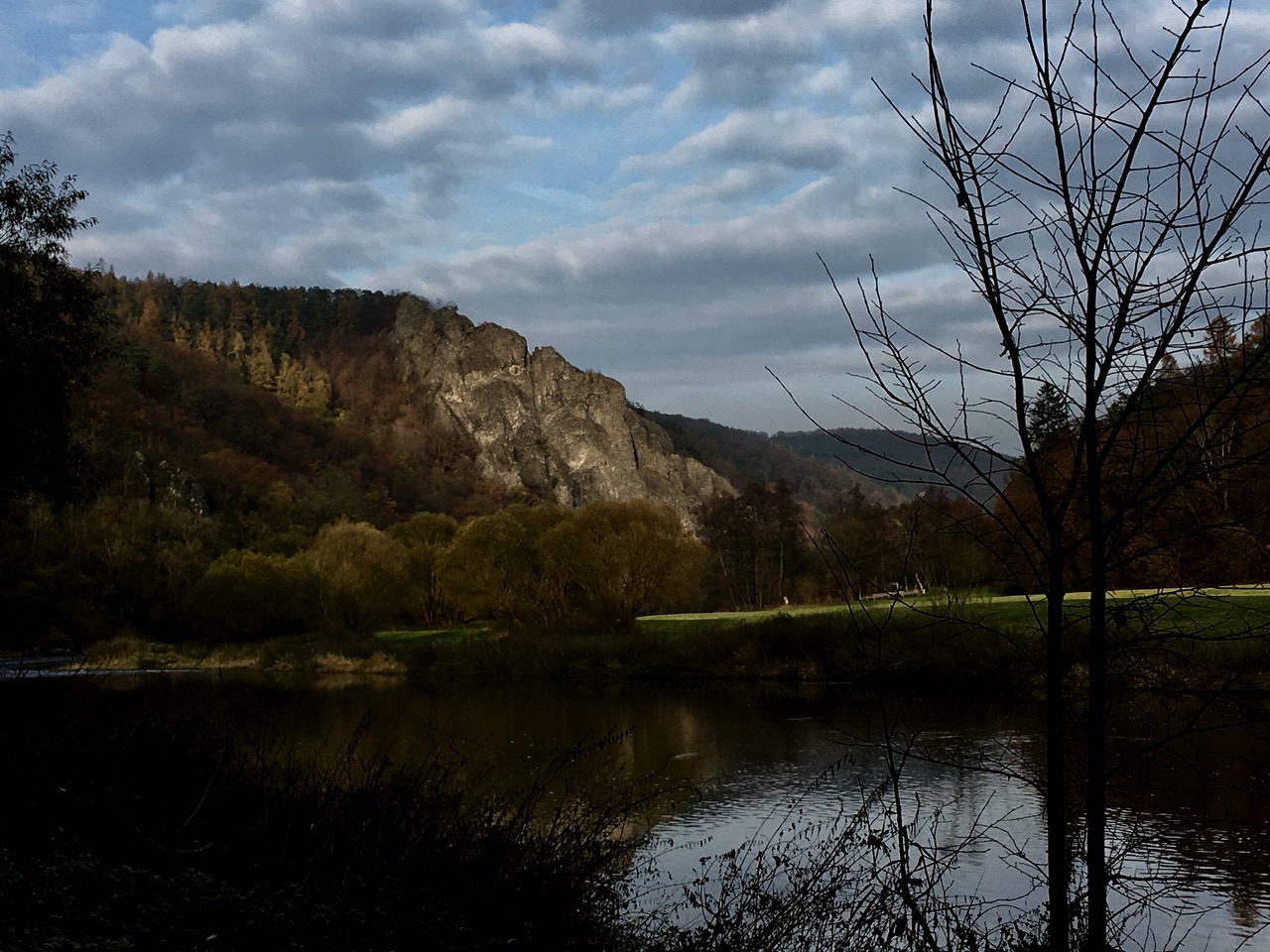 There were so many moments during both days, when I wondered how far and where my journey would take me. I know only where I have been, and I have learned some wonderful stories along the way. The first day I learned to keep going, onward through the fog. The second day I asked questions, mostly of myself, about the etymology of words, especially those that I use to describe the world to myself. 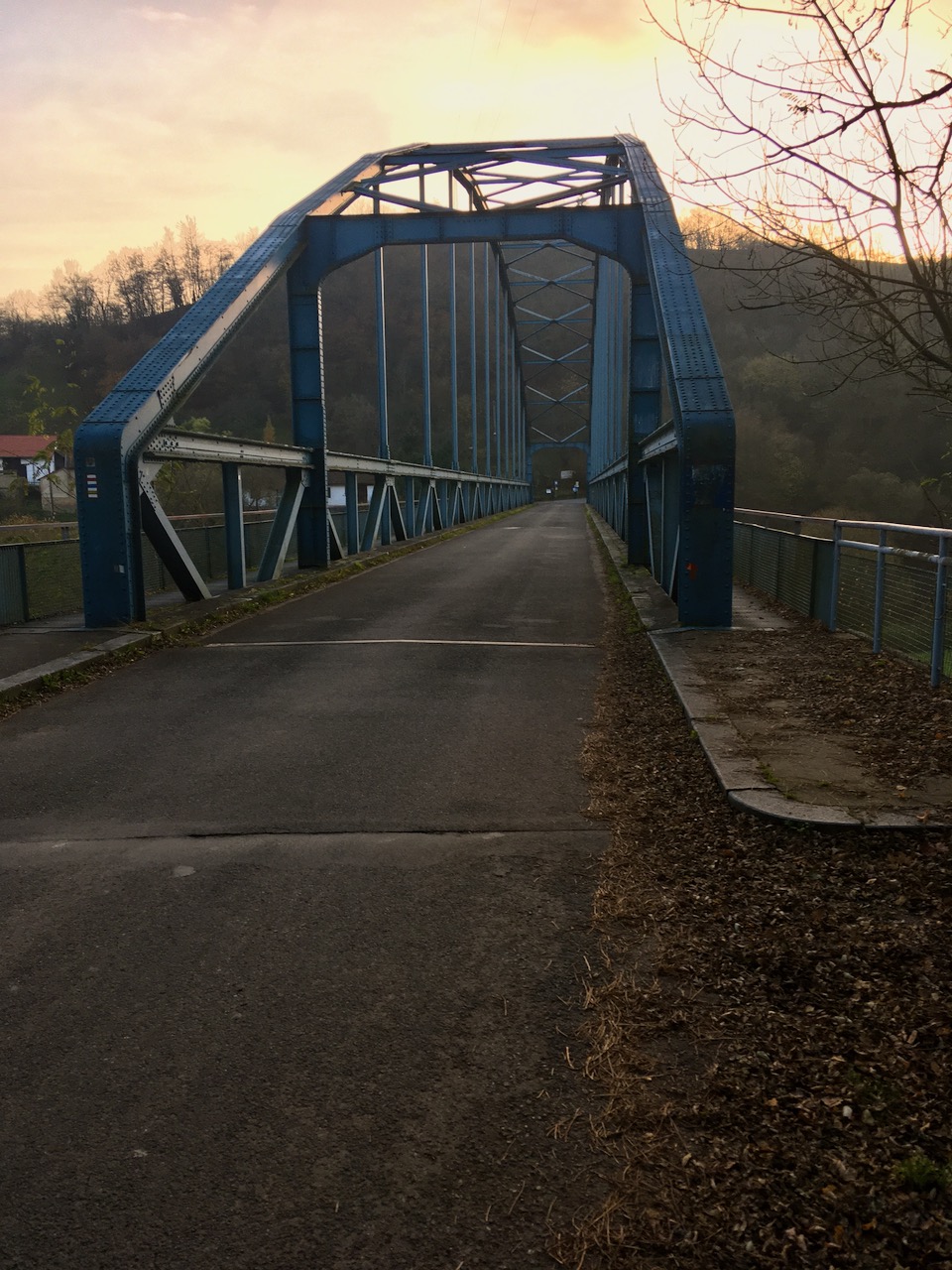 Late on the second day, I met a couple on the path. From a safe distance, they asked me about the path I had just walked. I struggled to make them understand, and finally apologized by saying; “Forgive me, I am American. My Czech is poor. I am a Pilgrim…”.

This brings me to the bridges. They symbolize the transcending of boundaries. The challenge that a river presents the traveler is real, and bridges provide the solution. Certainly, there are other ways to cross, from one bank to another, and further to travel upon the water path, as on a ferry. The bridges, like the castles, were built to defy the very nature of the river, to stand high above it, to span beyond its farthest bank. 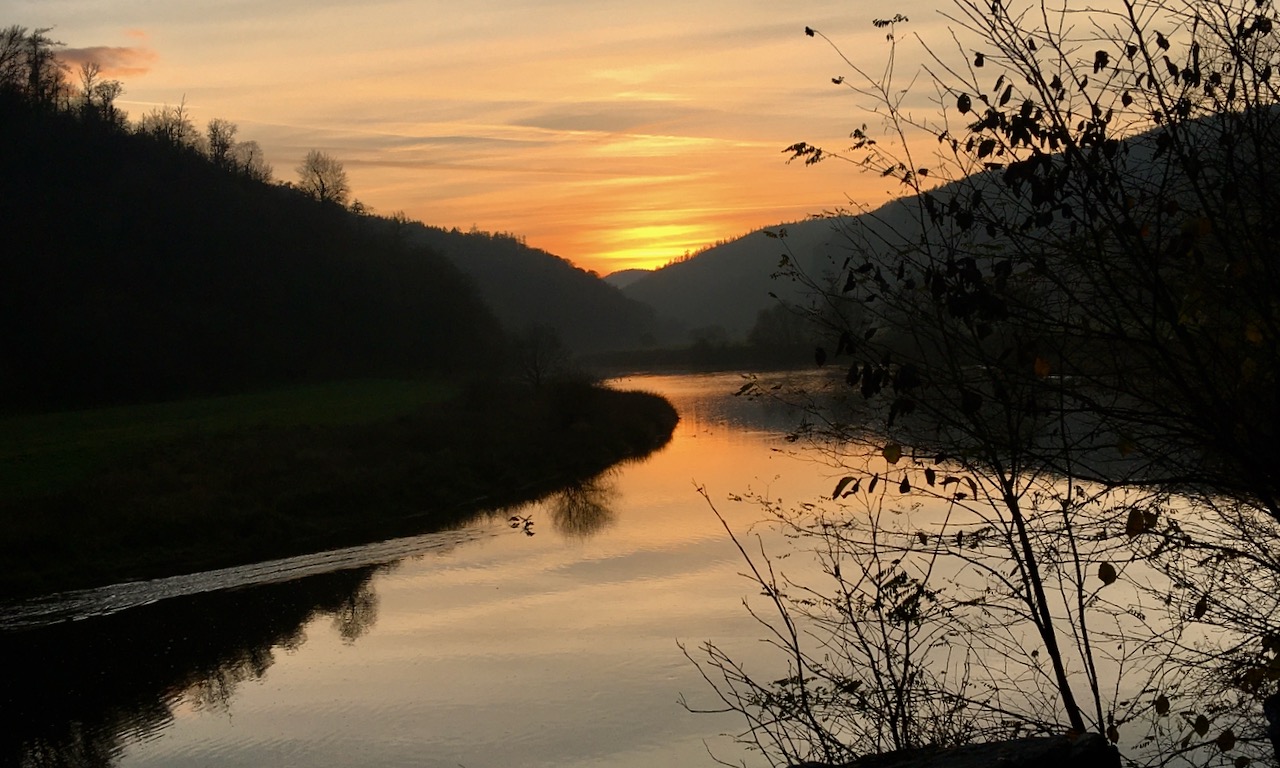 And there I stood, on a plain below the steel span, marveling at the lack of traffic. There were more of us crossing on foot than by car. As I know this river, and the plan to build a dam at Roztoky, it dawned on me just how these environ may be changed. As the castle ruins above, the bridge at Týřov would be gone before its time. Who’s to say, what happened here and why? It's a simple tale of Two Castles and Two Bridges.